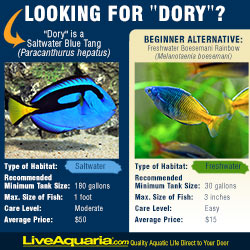 Live Aquaria has a freshwater option for Dory

We’re excited to have Craig Bingman with us again. In this week’s show we talk about the Petco and Live Aquaria campaigns to protect the ocean’s Dorys and the trends we’ve experienced in the history of the hobby, good and bad. It’s a terrific conversation with a real veteran of the hobby. Download the podcast here, or subscribe to our podcasts at iTunes. Also, follow us on Twitter at reefthreads.—Gary and Christine