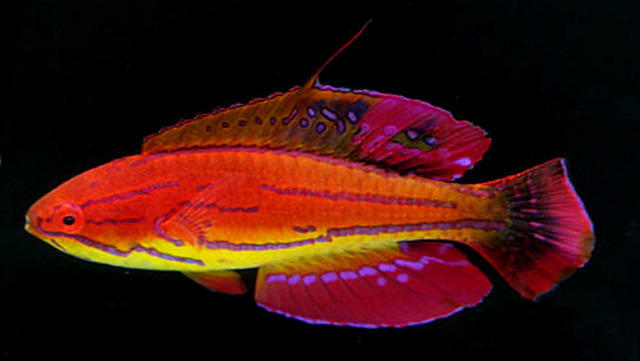 Of the twenty recognized species of Paracheilinus wrasses, few are quite so revered and expensive within the aquarium trade as P. attenuatus, known variably as the Seychelles Flasherwrasse, African Attenuate Flasherwrasse or Diamond-tail Flasherwrasse. This piscine rarity has a limited range in the wild and is seldom encountered, and so it is only infrequently made available from aquarium collectors, resulting in a price tag of many hundreds of dollars. Rarer still, several interesting hybrids have been discovered in recent years, offering us valuable insights into the mysterious evolutionary history of this poorly known species. 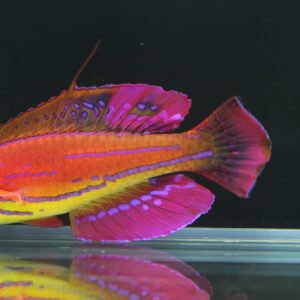 Aquarium specimens are most often sourced from Kenya, where this species is likely to be at the furthest extent of its range. Specimens have also been collected from Northeastern Madagascar, while the type locality lies just to the north at the Seychelles. It is known from moderately deep waters (20-50 meters), which helps to explain some of its apparent rarity. The purported hybrid has also been collected from Kenya, and is presumed to involve the true McCosker’s Flasherwrasse (P. mccoskeri), which is native to the East African coastline. These aberrant specimens show an intermediate mix of traits associated with both parent species—the hairlike dorsal fin filament and red, lanceolate tail of P. attenuatus and the black caudal fin base of P. mccoskeri. In addition, the dorsal fin has a unique and somewhat variable red marking and the anal fin is mostly red, versus the more bicolored appearance common to both parent species.

There are relatively few species of flasherwrasses in the Indian Ocean, as this genus becomes far more diverse in the Coral Triangle. We can easily diagnose a pair of larger species groups, which mostly agree with those proposed in the recent review of this genus by Allen et al 2016. One is comprised of P. mccoskeri and its Pacific counterparts (carpenteri, flavianalis, rubricadualis). The other group is limited to the Western Indian Ocean and is unusual within the genus for lacking the filamentous extensions of the dorsal fin seen in most other species, as well as tending to have a more heavily striped body. Included here is the Red Sea P. octotaenia, the East African/Madagascan P. hemitaeniatus and P. piscilineatus from the Mascarenes.

Given the known distribution of P. attenuatus, it would appear to quite nicely fill a gap in the biogeography of the mccoskeri species group, as elsewhere in the Indo-West Pacific there is always at least one of these fishes present. On the other hand, it also fills a bit of a gap in the range of the octotaenia species group, though, based on what we see in the distributions of many other reef fishes, we can expect that the poorly known P. piscilineatus should also occur in the Seychelles. If this is so, then the most plausible explanation for the unique features of the Diamond-tail Flasherwrasse is that it belongs to the mccoskeri group but has heavily interbred with the sympatric P. piscilineatus. 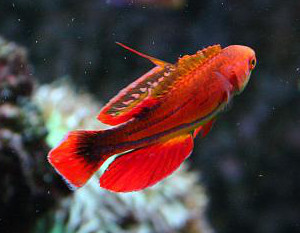 Another hybrid specimen, illustrating some of the variability in fin patterning. Credit: Bradley Syphus

Interestingly, the initial molecular research of Allen et al 2016 has placed this species as a close relative of the Western Indian Ocean taxa rather than near P. mccoskeri, though this is based solely on mitochondrial data (which could be expected to give misleading results when dealing with a potential hybrid-derived species). The importance of the P. attenuatus hybrids shown here is that their very existence potentially argues for a closer relationship to the widespread P. mccoskeri than has been appreciated. What’s ultimately needed to sort this out is a more thorough examination of this species’ genome, along with more field study to fully determine where these flasherwrasses occur in the wild. While it may be speculative, the possibility that this wrasse speciated through hybridization would be a remarkable discovery.

Fighting The Shark Trade From The Skies