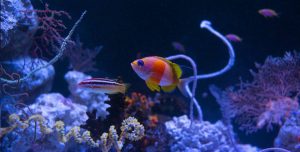 We’re back for the 280th time. Our guests this week are Matt Wandell, Richard Ross and, for the first time, Nick Yim, from the Steinhart Aquarium at the California Academy of Sciences. Lots of subjects this week, but the big one is the new twilight-zone display at the aquarium and what it’s like to dive deep for new species. If you enjoy the show, please tell others. —Gary and Christine