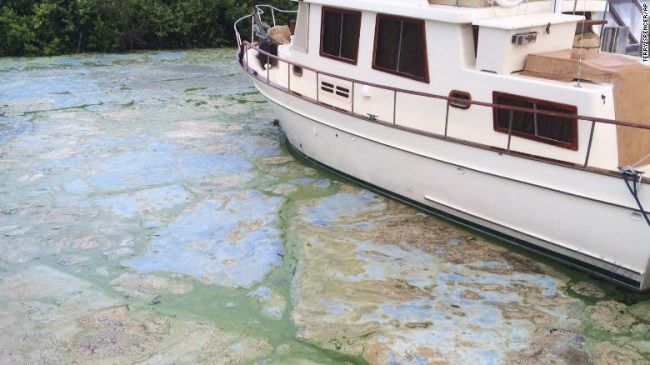 Jordan Schwartz, owner of the Ohana Surf Shop, said he wanted to cry when he saw the green slime — a toxic algae bloom — covering his swath of Stuart Beach on Florida’s east coast.

The Army Corps of Engineers released nutrient-heavy water into the St. Lucie Estuary as part of their flood control measures, Corps spokesman John Campbell told CNN. The algae outbreak eventually reached the beaches. To make matters worse, a massive algae bloom was already covering the lake. Following the emergency declaration, the Corps announced it would cut discharges by about a third beginning Friday. “The algae outbreaks are triggered by fertilizer sewage and manure pollution that the state has failed to properly regulate. It’s like adding miracle grow to the water and it triggers massive algae outbreaks,” Earthjustice spokeswoman Alisa Coe told CNN. Earthjustice, a nonprofit environmental law organization, has been fighting for tougher pollution limits in the state. “We’ve seen this for MORE

The Yellowbar Angelfish, one of the largest of the Pomacanthids