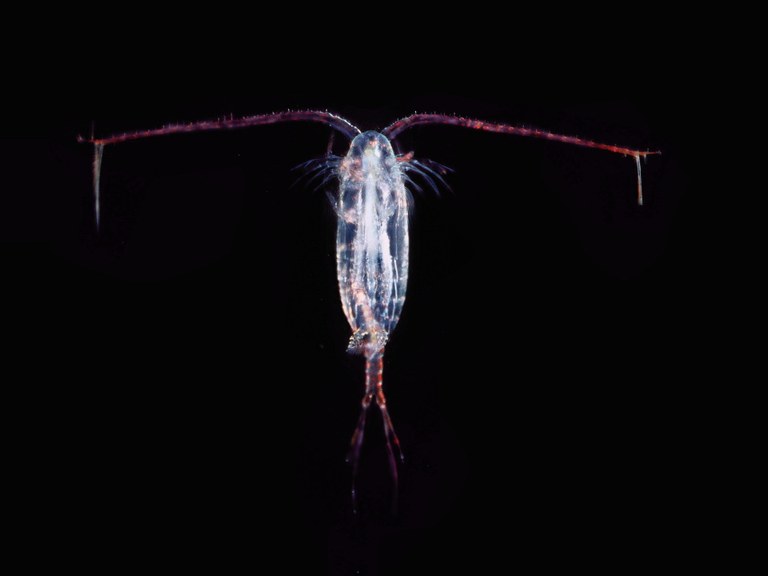 The health of plankton like this copepod impacts the health all life up the food chain.

In an experiment with organisms from the Kiel Fjord, a team of biologists from GEOMAR Helmholtz Centre for Ocean Research Kiel demonstrated for the first time, that ocean acidification and rising water temperatures harms the fatty acid composition of copepods in the natural plankton community. As a consequence, fish might find food of poorer quality, the researchers argue in their publication in PLOS ONE.

Ocean acidification, rising temperatures, eutrophication and loss of oxygen: Life in the oceans has to cope with a variety of factors. How will plants and animals react when global climate change alters their environment? Laboratory and field experiments, observations at naturally extreme habitats and modelling approaches help researchers to evaluate the reactions of the ecosystem ocean.

Scientists of GEOMAR Helmholtz Centre for Ocean Research Kiel used so-called “indoor mesocosms” to mimic the future ocean in their laboratories: They transferred the natural plankton community from the Kiel Fjord into twelve 1400-liter tanks and brought them to two different temperatures and two different carbon dioxide concentrations. After a month, they examined the number and body size of various developmental stages of copepods as well as their content of fatty acids, which is crucial for the organisms’ nutritional value. The up to one millimetre long crustaceans form about eighty per cent of the zooplankton and are an important food for fish and their larvae. The journal PLOS ONE published the results of the study, which was conducted as part of the German research network BIOACID (Biological Impacts of Ocean Acidification).

“Several experiments have demonstrated that the effects of various environmental factors on marine organisms either add up or attenuate each other. Because the body functions of organisms are altered differently by the combination of factors, it is very difficult to estimate the ultimate outcome”, explains Dr. Jessica Garzke, marine biologist at GEOMAR and first-author of the publication. “For the copepods, we have shown that the negative impact of rising water temperatures is more significant than of ocean acidification. Ocean acidification can mitigate some reactions – for example, because the additional carbon dioxide that is dissolved in the seawater supports the growth of phytoplankton as food for the copepods. But in the end, these benefits are not strong enough to achieve a positive effect.”

The Kiel study is the first one to give insight into the effects of ocean acidification and rising temperatures on the composition of fatty acids in a natural community of copepods. “According to our observations, the fatty acid composition is affected negatively. This means that the food quality to higher levels of the food web decreases”, Garzke emphasizes. “Food webs, which are influenced by the food quality – not by the sheer mass of supplies – would be deteriorated.”

Dr. Garzke and her team assume that their results can be transferred to other coastal regions similar to the Kiel Fjord. “Because the carbon dioxide levels fluctuate greatly due to the flow conditions in the fjord, organisms may be adapted to elevated levels and suffer less than their counterparts in other waters”, the biologist supposes. “But we have to consider that more environmental factors will come into play in the future. We need more experiments to investigate these scenarios for ecologically important species.”