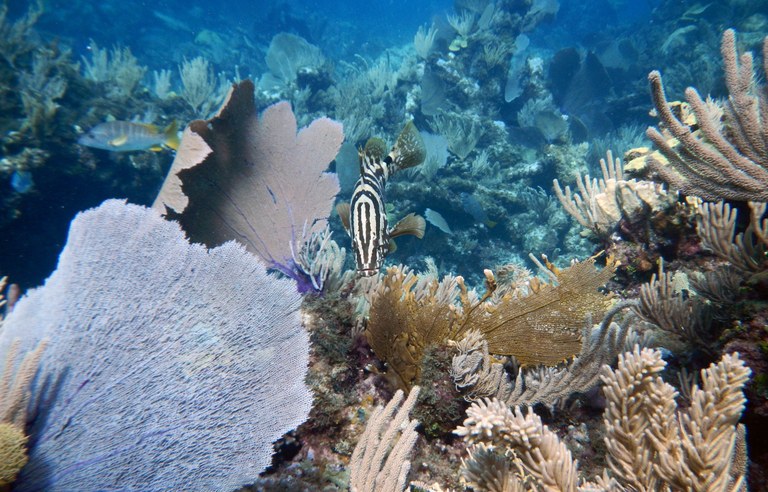 The Nassau grouper, pictured center with stripes, is one of the larger fish that lives around coral reefs.Craig Layman/North Carolina State University

by the University of Washington

Coral reefs wouldn’t be the same without their beautiful fish.

A diversity of colorful, beautifully patterned species lives in tandem with coral reefs around the world, having adapted their appearance, body structure and lifestyle to take refuge in the folds of spiny, spongy, slippery reefs.

Recent studies suggest that coral reefs, however, are just as dependent on these fish for key nutrients that help coral grow. When fish urinate, they release phosphorus into the water. This phosphorus, along with nitrogen excreted as ammonium through the gills of fish, is crucial to the survival and growth of coral reefs.

A new study appearing Aug. 16 in Nature Communications takes this a step further, finding that in coral reefs where fishing occurs, nearly half of these key nutrients are absent from the ecosystem.

The main reason? Fewer large-bodied and predator fish to pee nutrients into the water, the study found.

“Part of the reason coral reefs work is because animals play a big role in moving nutrients around,” said lead author Jacob Allgeier, a postdoctoral researcher at the University of Washington’s School of Aquatic and Fishery Sciences.

“Fish hold a large proportion, if not most of the nutrients in a coral reef in their tissue, and they’re also in charge of recycling them. If you take the big fish out, you’re removing all of those nutrients from the ecosystem.”

Paper co-authors Abel Valdivia at the Center for Biological Diversity in San Francisco and Courtney Cox at Smithsonian Marine Station at Fort Pierce, Florida, surveyed 143 fish species at 110 sites across 43 Caribbean coral reefs that varied in the amount of fishing pressure sustained — ranging from marine preserves that banned all fishing to heavily fished reefs where large predator fish are almost gone.

The researchers found that reefs with more large, predator fish had healthy levels of nutrients, while reefs depleted of large fish had nearly 50 percent fewer nutrients, including phosphorous and nitrogen, essential to their survival.

The researchers determined that, despite the substantial reduction in fish-mediated nutrients, fishing didn’t substantially reduce the number of fish species present. Instead, the large reductions in fish pee were driven by the reduction of large-bodied fish and predator fish such as grouper, snapper or barracuda that occurs through selective fishing practices.

“Simply stated, fish biomass in coral reefs is being reduced by fishing pressure. If biomass is shrinking, there are fewer fish to pee,” Allgeier said.

Phosphorus in fish pee and nitrogen excreted through their gills are important nutrients for coral reefs to grow. In many reef communities, fish will take shelter in and around coral during the day — peeing out valuable nutrients — then forage for prey in and around the reef by night.

Coral reefs are the very definition of a delicate ecosystem. They are highly productive in terms of the biodiversity they support, but there aren’t a lot of nutrients to spare. Reefs operate on what scientists call a “tight” nutrient cycle, meaning there must be an efficient transfer of nutrients for coral to grow. This cycle is largely controlled by fish, which hold nutrients in their tissue and then excrete them through their gills and urine.

Allgeier spent four years measuring the amount of nutrients in fish pee and fish tissue to eventually build a massive dataset that tracks fish size and nutrient output and the amount they store in their tissue.

As a graduate student, Allgeier’s kitchen on Abaco Island in the Bahamas became his lab, and he caught hundreds of live fish, put them in plastic bags for half an hour, then measured the nutrients in the water before and after. He found that nitrogen output varied consistently with body size among all fish, and that carnivorous fish would pee more phosphorus than smaller herbivores.

Now, with these data serving as the basis for their models, Allgeier and collaborators can estimate the total amount of nutrient output from fish by knowing the species and body size of fish in a coral reef community.

“It’s remarkable how robust the models are just from knowing fish size and species,” he added.

The researchers expect this relationship between fish and coral exists in other reefs around the world. Allgeier is currently working with researchers at the University of California, Santa Barbara, to collect data next on fish pee in tropical Pacific Ocean reefs, essentially building upon the data collection Allgeier did as a graduate student.

Craig Layman at North Carolina State University is the paper’s other co-author and a longtime collaborator of Allgeier on this area of research.

This study was funded by the Environmental Protection Agency and the National Science Foundation.