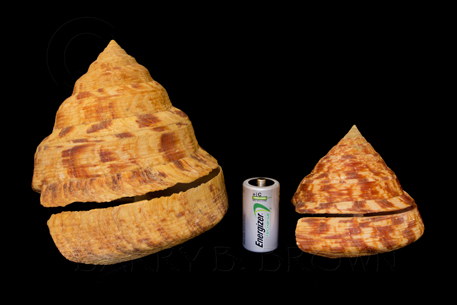 Good morning friends, I have two rare, deep-sea slit-shells for you all today; our crew found these a few months ago on the island of Dominica with our submersible called the “Curasub” at depths ranging from 350 to 600 feet. Here’s a small note from a pleurotomariid expert that wrote in this morning… “the bright colors in some shells and animals from deep water are astonishing…but don’t forget that yellow and red/pink colorations are the first to be filtered out by the light (wavelengths) reaching those depths….and thus are a kind of hiding colors in these depths for predators …..there’s also a hypothesis that particular color pigments present in the encrusting sponges, which form the main diet in most slit-shell species, are incorporated into the outer prismatic layers during shell development (and those yellow and red encrusting sponges are found around the same habitat where adansonianus lives, in the same depth cline).”

These are the shallowest-occurring and most commonly collected pleurotomariids in the Western Atlantic with a range that extends from Bermuda to Southern Brazil. Slit Shells of this species live at depths of 180 feet to 700 feet so it’s safe to say that not many folks will ever see one while out diving! In the rest of the Western Atlantic, there are three species of pleurotomariids that co-occur in any given area, but they are not sympatric as they occur at different depths. These shells are a collector’s dream, truly a thing of beauty! MORE