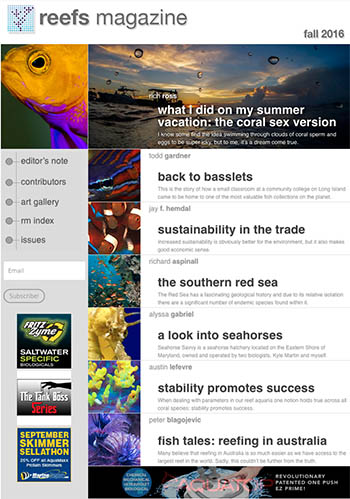 As the doors close on the 28th  Marine Aquarium Conference of  North America, Reefs Magazine drops the curtain on our next issue. Much like the conference itself this issue presents a mature and diverse hobby combining the best of science, practical husbandry, conservation and passion for all things aquatic.

In our feature, Rich Ross offers a personal account of his field work in the Caribbean collecting and analyzing the spawn of Acropora cervicornis as part of project CORL.
Todd Gardner is at it again. This time wowing us with his grounding breaking breeding of yet another rare basslet– the flathead perch Rainfordia opercularis.
Jay Hemdal takes a closer look at issues of hobby sustainability and reminds us that sustainability is a continuum and not a “yes” or ” no” proposition.
Richard Aspinall takes us on an underwater journey in the Red Sea, and Austin Lefevre offers important coral husbandry advice for beginners and experienced alike.
Seahorses! We have lots of seahorses!  Alyssa Gabriel from Sea Horse Saavy gives us a glimpse into the workings of a large-scale Seahorse propagation facility. The basics of large scale breeding are the same foundations for successful home care.
Finally, our Fish Tales piece comes from down under. Australian hobbyist Peter Blagojevic highlights some differences between Reefing in Australia and the US.  His extensive travels throughout North America  provide some interesting perspective.
Happy Reefing,
Randy