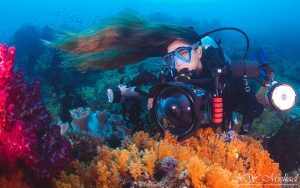 Alex Rose returns this week for a riveting chat about diving with Great White sharks and seeing some amazing reefs in Raja Ampat. Don’t miss this week as Alex takes us around the world once again. Also, take a moment to visit the Ocean Geographic Facebook page and Alex’s new The Ocean Facebook page. Download the podcast here, or subscribe to our podcasts at iTunes. Also, follow us on Twitter at reefthreads.—Gary and Christine