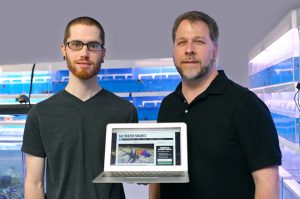 This week we talk about several of the interesting posts offered by Jeff Kurtz and Chris Aldrich of the Saltwater Smarts website. Topics include downsizing your marine system, overdoing water changes, salt creep, and rock rubble. Download the podcast here, or subscribe to our podcasts at iTunes. Also, follow us on Twitter at reefthreads.—Gary and Christine

Prevent a Salty Situation: Which Saltwater Fish Are Compatible?