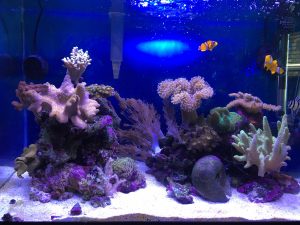 For podcast #299, we’re very excited to have listener Emily McPerson as our guest. Join us to hear how she took a 10-gal. “gift” and, after a bunch of research, whipped that tank into shape, upgraded to a 20-gal reef, and then used the 10-gal tank to her new passion for the reef-aquarium hobby with her friends at the local senior center. It’s a great story about how someone who knew nothing about the hobby got hooked and is now enjoying and sharing the beauty of reef animals. Download the podcast here, or subscribe to our podcasts at iTunes. Also, follow us on Twitter at reefthreads.—Gary and Christine