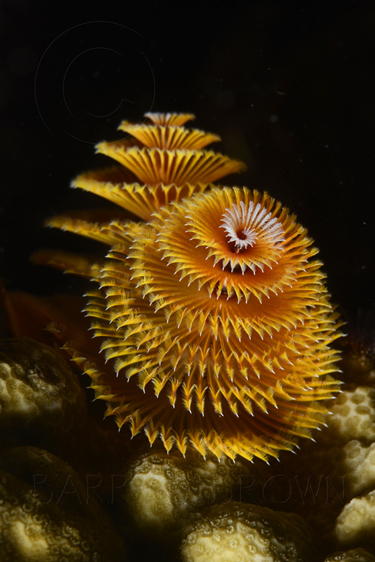 I have a super beautiful Christmas tree worm for your viewing pleasure today that I shot on last nights super fun night dive.

Spirobranchus giganteus, commonly known as Christmas tree worms, are tube-building polychaete worms belonging to the family Serpulidae.worm is aptly named, both its common and Latin names refer to the two chromatically hued spiral structures, the most common feature seen by divers. The multicolored spirals are highly derived structures for feeding and respiration.

Spirobranchus Gianteius Peniez is similar to most tube-building polychaetes. It has a tubular, segmented body lined with chaeta, small appendages that aid the worm’s mobility. Because it does not move outside its tube, this worm does not have any specialized appendages for movement or swimming.

The worms’ most distinct features are two “crowns” shaped like Christmas trees. These are highly modified prostomial palps, which are specialized mouth appendages. Each spiral is composed of feather-like tentacles called radioles, which are heavily ciliated and cause any prey trapped in them to be transported to the worm’s mouth. While they are primarily feeding structures, S. giganteus also uses its radioles for respiration; hence, the structures commonly are called “gills.”

One major difference between Christmas tree worms and the closely related sabellida fan worms is that the latter do not have any specialized body structures to plug their tube holes when they withdraw into them. S. giganteus, like other members of its family, possess a modified radiole, usually called the operculum, that it uses to secure its hole when withdrawn into its tube. MORE