Guardians of the Coral 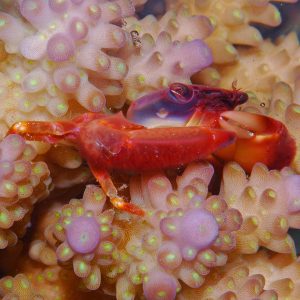 There are two genera of coral guard crabs commonly found in the aquarium trade – Trapezia and Tetralia – that are symbiotic with small polyp stony corals such as Acropora, Pocillopora, Stylophora, and Seriatopora corals. These corals attract and feed their tiny symbionts with special fatty mucous they produce just for the crabs.

Inexperienced reefers sometimes remove coral guard crabs from their host coral in error, but they are actually quite beneficial. Coral guard crabs remove debris and sediment that settles on the host coral and increase flow to the coral’s center, preventing tissue necrosis. In turn the crab gets a home and a coral mucous meal. They also protect the host coral from some pests and predators. Larger species pinch the underside of the crown of thorns star, a large predatory sea star that consumes coral, until it moves on to an unprotected coral. Smaller crabs protect corals from predatory snails and small pests. Studies show that higher densities and diversity of coral guard crabs on wild Acropora and Pocillopora coral colonies increase survivability. In captivity it’s best to keep them on larger SPS colonies since their activities have been reported to sometimes cause damage to frags and very small corals.

Pairs of Tetralia spp., such as T. glaberrima, T. nigrolineata, and T. cinctipes live in Acropora corals. They are tiny and have different sized chelipeds (claws). They are usually purple, white, or orange, and some have a dark “mask” across the eyes, giving them the common name “bandit crabs.”

Larger, equal handed species like Trapezia rufopunctata, Tetralia cymodoce, Tetralia sereni, and Trapezia septata are Pocilliopora symbionts. Trapezia digitalis is a less picky symbiont and will pair with Acropora, Pocillopora, and Pavona corals. Seriatopora spp. host Trapezia guttata.
Blue eyed Cymo spp. crabs are coral symbionts, but in captivity they tend to be too destructive on all but the largest coral colonies, so most reefers banish them. Trapeziid crabs are easily distinguished from blue eyed crabs. Guard crabs are more smooth and colorful while blue eyed crabs are hairy, rough, and tan or brown with pale blue eyes.