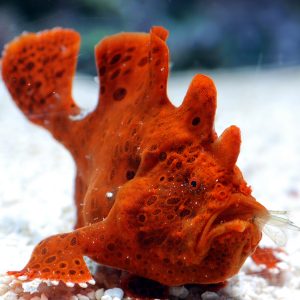 The Wartskin and Painted Anglers are strange looking fish with even stranger habits. Colored specimens perfectly match the toxic sponges in their habitat, while green and brown specimens blend in with the substrate. Some even mimic purple coralline algae. They use foot-like pelvic and pectoral fins to slowly “walk.” When alarmed, an angler can make a (relatively) speedy getaway by pumping large amounts of water into its siphon-like gills, propelling it through the water while using its tail for a rudder.

The Wartskin Angler Antennarius maculatus is difficult to distinguish from its closest relative, the Painted Angler Antennarius pictus. Wartskin anglers usually have orange margined fins and a colored band that touches the eye. Painted anglers have dark bands on the illicium.

Perhaps the most remarkable characteristic of the angler is its illicium (fishing rod) and esca (lure). The illicium is actually its first dorsal spine; the frayed, fleshy esca resembles a tiny bait fish. When a suitable prey item is spotted, the angler holds perfectly still while wiggling the lure. To the intended prey, it looks like a tiny, irresistible, wounded fish. When the prey ventures close enough to investigate what it thinks is a potential meal, the angler strikes with lightning speed, opening its huge mouth and creating a vacuum to suck in its prey.

Antennarius pictus eating live shrimp. Notice the dark bands on the illicium (rod), which distinguish it from Antennarius maculatus, the wartskin angler

In captivity, anglers usually require live food items such as saltwater feeder shrimp or small saltwater fish. Goldfish and other freshwater fish are not suitable foods for anglers; they are too high in the wrong type of fat and will quickly lead to health problems. With persistence and patience some anglers may be trained to eat frozen foods from a feeding stick. Small anglers that are still growing need to be fed several times a week, but healthy adult anglers should be fed twice a week. A well balanced diet including silversides, clam, shrimp, squid, and other meaty foods is important.

Because of their sedentary lifestyle, a single angler can be housed in a small aquarium of at least 20 gallons. Stinging corals and anemones may sting these demersal fish, so use caution. Anglers can eat fish up to two times their body length. Angelfish and other algae grazers may accidentally nip at an angler. In large aquariums anglers may be kept with peaceful fish that are at least twice their size, such as boxfish, rabbitfish, sweetlips, and squirrelfish. Most large, aggressive fish like triggers and puffers should be avoided, as they can easily harm an angler. Similar ambush predators like other anglers, scorpionfish, lionfish, and leaf fish of the same size may be kept with an angler. Anglers are sometimes aggressive toward other anglers, and if they are not the same size, a smaller angler may be eaten. To reduce aggression in multiple angler aquariums, it may be necessary to feed them more often.

An Incredible New Idea from XAqua: the Filter Box