A Mysterious New Surgeonfish (That Might Be A Hybrid), Acanthurus albimento 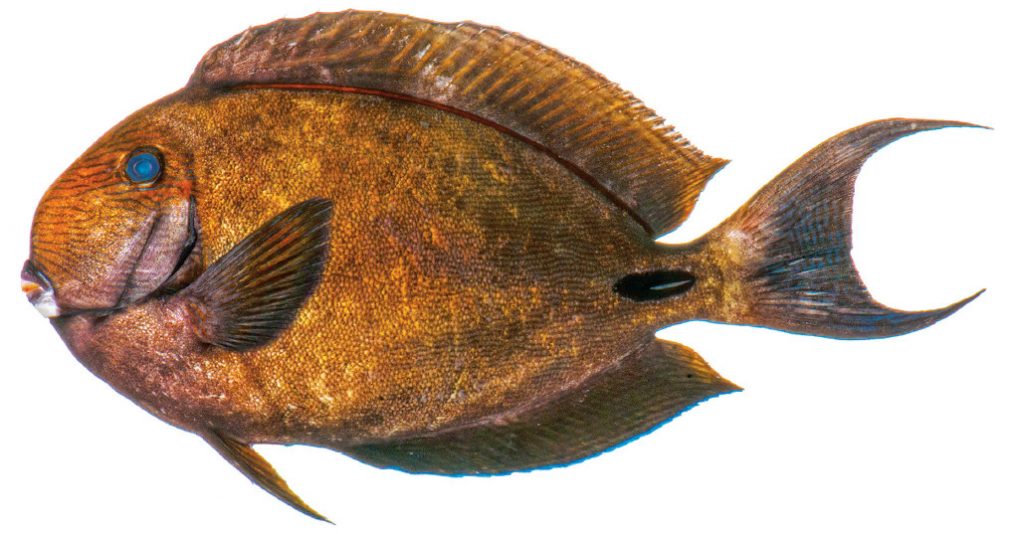 Whitechin Surgeonfish (Acanthurus albimento), holotype specimen from Northeast Luzon. Credit: J.T. Williams / Carpenter et al 2017It’s rare for a newly described species to be totally unexpected, but I think this accurately describes the situation with the Whitechin Surgeonfish. This species is described in the latest edition of JOSF and belongs to the highly diverse genus Acanthurus, which includes many species familiar to aquarists, and many others that are heavily exploited as food fishes. These are some of the most prominent and important inhabitants on coral reefs, and, for this reason, we know them pretty well. To emphasize this point, there hasn’t been a new species described in this genus from the West Pacific since the 1950’s. So how, dear reader, did we fail to notice A. albimento for so long?

The discovery of this acanthurid was the result of a study which sought to investigate species collected for the local fish markets of the Philippines. The authors sampled different fishes for a single mitochondrial gene—CO1, the so-called “DNA barcode” used widely in species determinations—and stumbled upon a small series of specimens (six in total) which failed to match with any of the known taxa from this region. Aside from the unique genetic signature, the specimens also looked quite distinct, possessing an unusual mix of traits which occur to varying extent in other closely related taxa. These include a white chin, a black spot surrounding the caudal spine, blue linear marks on the face and pectoral fins, and an orange vertical bar above the pectoral fins. 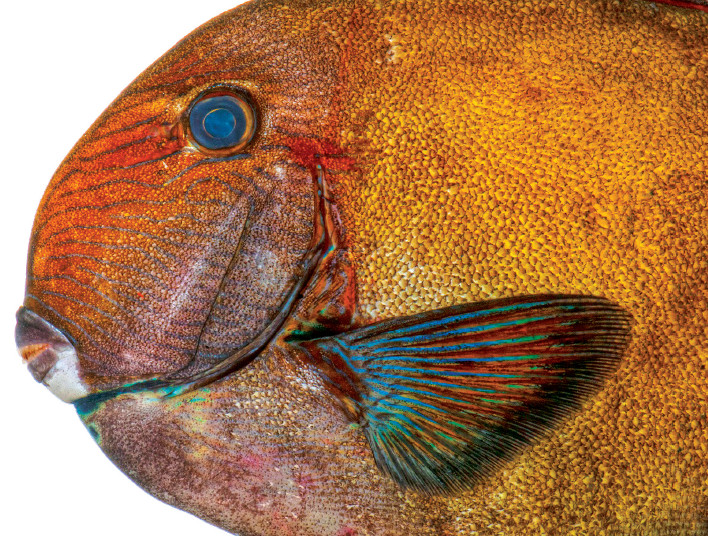 The authors put forth a few possibilities to explain the anomalous discovery of this fish. 1) This is simply a rare species that has merely been overlooked up until now. Of course, given the vast amount of collection that has taken place in the Philippines, this is implausible enough to render the argument without merit. 2) The species is restricted to deepwater habitats. Again, this is an unfulfilling explanation, as no other member of the genus shows such a limited depth distribution, and, even so, we would expect to have collected it quite regularly by now. It’s not like fisherman don’t find ways to collect from deeper waters. 3) This is an endemic species in the Northern Philippines. 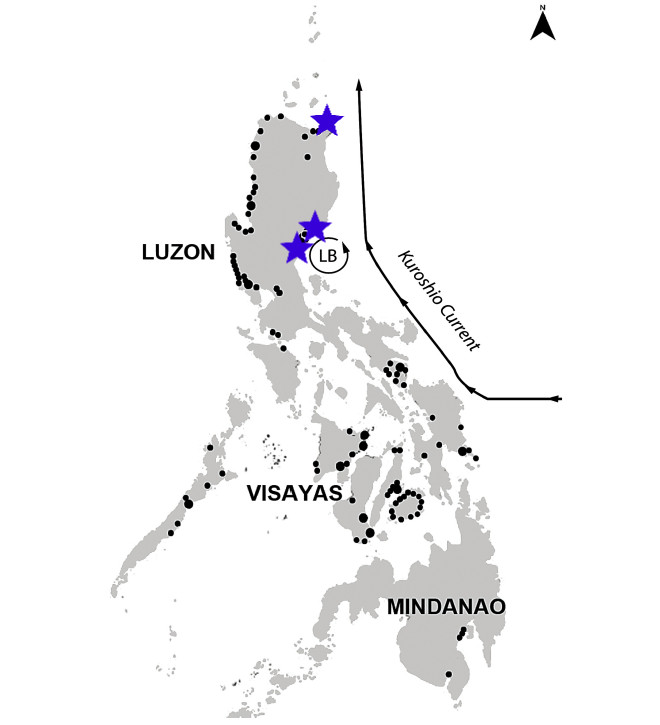 This last explanation is the one that seems to have been favored, but I find this also to be lacking in substance. The authors attempt to correlate the unusually limited distribution of A. albimento along the northern coast of Luzon to an eddy of the Kuroshio current, which runs northward along these coast towards Japan. But, even a cursory glance at the biodiversity in this region shows that the Philippines harbors relatively few endemic species, and those which do exist are without exception from more widely spread species complexes than what we find within the surgeonfish family. Good examples of true Filipino endemics can be seen with flasherwrasses (Paracheilinus lineopunctatus, P. carpenteri) or fairy wrasses (Cirrhilabrus rubripinnis, C. cf temminckii, C. cf pylei, C. lubbocki) or velvet angelfishes (Chaetodontoplus caeruleopunctatus) or dottybacks (Pictichromis diadema). To wit, there are no acanthurids with such a fragmented, endemic range within the Coral Triangle. 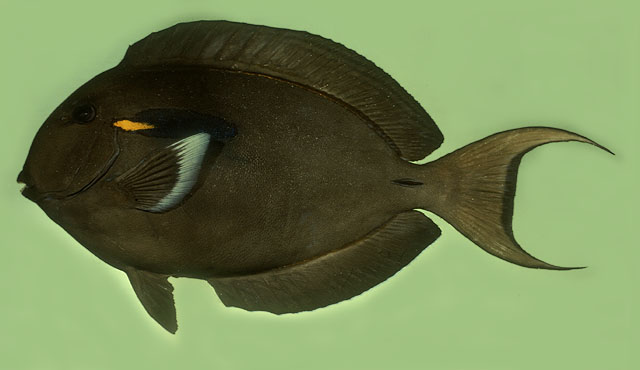 Acanthurus reversus (a close relative of the Orange-shoulder Surgeonfish A. olivaceous) is a good example of a surgeonfish with a truly restricted distribution, being found only in the Marquesas Islands. Such endemism is seemingly never found within the West Pacific for this genus. Credit: John Randall / Fishbase

The reason for this is quite obvious. The larval duration of acanthurids is fairly long and inherently prohibits the necessary isolation of populations needed for speciation to advance. For this reason, the majority of acanthurids enjoy fairly broad distributions, with the only exceptions tending to be peripherally isolated taxa in areas around the Arabian Peninsula or Polynesia. In the West Pacific, there’s simply no biogeographic mechanism to isolate a surgeonfish, and, so, the species which occur there are mostly widespread. Only two exceptions seem to exist, and, tantalizingly enough, these are also the only two species from the region whose DNA has yet to be studied. See where I’m going with this? 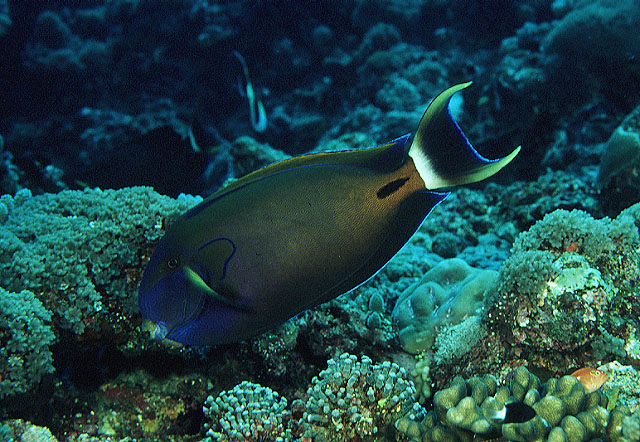 Fowler’s Surgeonfish (A. fowleri) and the Finelined Surgeonfish (A. grammoptilus) are both recorded from an unusually small range in the Coral Triangle—the region encompassing the Philippines, Indonesia and the Solomon Islands. Now, it’s safe to say that none of the six known specimens of A. albimento correspond to either of these readily identifiable species, but we have to also entertain the possibility that the albimento phenotype may simply represent a hybrid of one of these. This is something that the species’ authors failed to do, but I feel there is a very strong case to be made for this line of reasoning. 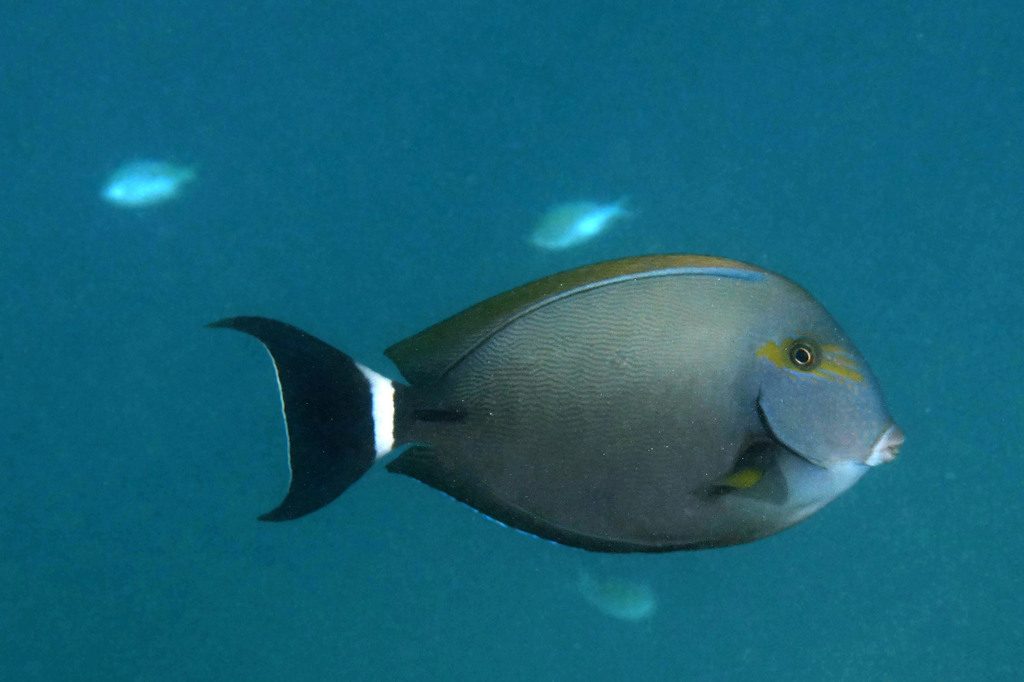 For A. albimento to be a hybrid, it would require one of the parents to be a female of either A. fowleri or A. grammoptilus. We know this because mitochondrial DNA is inherited only from females and none of the sampled specimens matched with species that have already been sequenced. The authors show A. albimento to group closely with a clade of superficially similar surgeonfish species which have specialized on a highly detrivorous diet. This includes A. bariene, A. blochi, A. maculiceps and several others. But we can narrow down the potential father in this scenario by focusing on a pair of prominent traits: 1) the highly rounded cranial shape 2) the orange pectoral bar. There is only one species possessing both of these characteristics—A. bariene—which the authors posit as a potential sister species or their new surgeonfish. 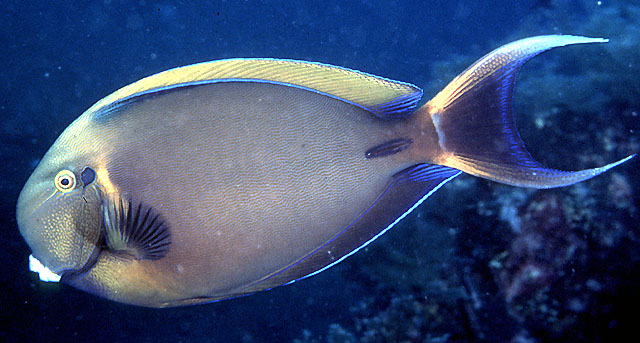 So, as I hope I’ve illustrated, there are several reasons to question the validity of A. albimento. First and foremost, it makes little sense in relation to the overwhelming pattern of speciation seen in the West Pacific among acanthurids and coral reef fishes in general. And the general rarity of specimens (just six discovered in several years of study) is also antithetical to the tendency of Acanthurus species to be both abundant and gregarious. The notion that there might be an undersampled mesophotic taxon in the genus which has somehow consistently eluded the nets of fishermen in the Coral Triangle seems highly implausible as well. Instead, I argue that the apparent rarity of A. albimento and its incongruity with previously known species is the result of it being a rare hybrid of one of the two taxa from the region yet to be genetically sequenced. 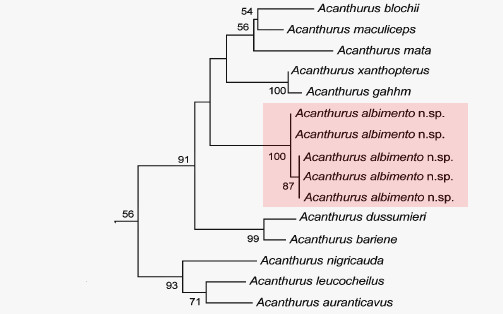 The most likely of the two would seem to be A. grammoptilus, which has both a white chin and a prominent black marking around the caudal spine. And, so, the albimento phenotype could be hypothesized to be the result of a male A. bariene mating with a female A. grammoptilus. Interestingly enough, aquarium specimens thought to be hybrids of A. bariene have been documented before, illustrating the potential for this fish to mate outside its normal species boundaries. Of course, what I propose here is all quite conjectural until more exhaustive genetic work can be completed, but, then again, A. albimento is itself quite conjectural. Extraordinary claims require extraordinary evidence to support them, and, without further study, there are, in my estimation, simply too many questions surrounding the Whitechin Surgeonfish to accept it as a valid species until additional observations prove otherwise.

How to Clean Aquarium Glass