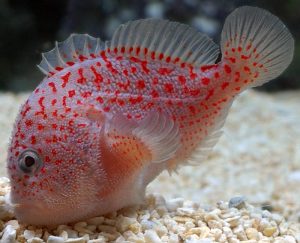 If you’re interested in scorpionfish but have a small tank, check out the tiny Caracanthus. There are four species in this genus, though only two are offered in the pet trade — Caracanthus maculatus from the Indo Pacific and Caracanthus madagascariensis from Africa. They are called Velvetfish or Gumdrop Coral Crouchers, but they’re not related to gobies. Velvetfish belong to the order Scorpaeniformes like scorpionfish and lionfish. The African specimens are the most colorful, having pink bodies and red spots to resemble the Pocilloporid corals they inhabit.

These tiny fish only grow to about 2 inches. They are clumsy swimmers and prefer to perch or squeeze themselves into tight spaces, holding on with their thick pectoral fins. Velvetfish have vertically flattened bodies so they can squeeze into the branches of stony corals. If you have large, healthy coral colonies, the velvetfish shouldn’t harm them, though a pair of velvetfish may damage a small patch of coral tissue if they spawn.

Velvetfish are venomous, so use caution. As long as you don’t squeeze one, you probably won’t be stung. The sting isn’t painful as the sting of their scorpionfish relatives, but if you are stung, immediately soak the area in hot water.

Velvetfish may be aggressive toward their own kind and are best kept singly unless they’re an established pair. They are docile toward other fish and inverts; only the smallest shrimp are at risk, even small gobies are usually too large to fit in the tiny velvetfish’s mouth. 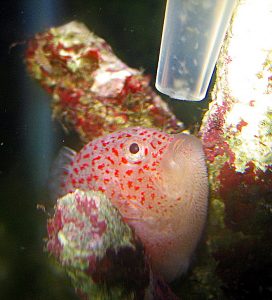 When choosing a Velvetfish, assess the body condition – it’s common for this species to linger too long in wholesale or LFS without eating. Their bellies should be rounded and not concave, and the head and dorsal area should be full, not indented. They are mainly live food eaters and may appear to be interested in the frozen food at the LFS, only to spit it out after tasting it. It can be difficult to feed these cryptic fish in a larger aquarium; this is a good reason to quarantine and condition velvetfish in a small, bare bottomed tank with a hiding spot before introducing to the display tank. They hide constantly and are only interested in food that falls near them, so target feeding is required. It takes some preparation to keep a Velvetfish that only eats live food, and it may not eat frozen mysis right away, even if it was eating it in the store. Enriched live adult Artemia or small gutloaded freshwater ghost shrimp are decent transitional foods. Once acclimated for a few months, a velvetfish may venture out and become more visible, interactive, and may even chase down food.

Velvetfish are fascinating, peaceful little gems that can be kept in a nano reef aquarium. If a non-reefer friend points out that your Velvetfish is not very active and a little “boring,” you could always impress them with, “Hey, it’s venomous.”

The Elusive Pseudanthias hutomoi Collected Near The Philippines