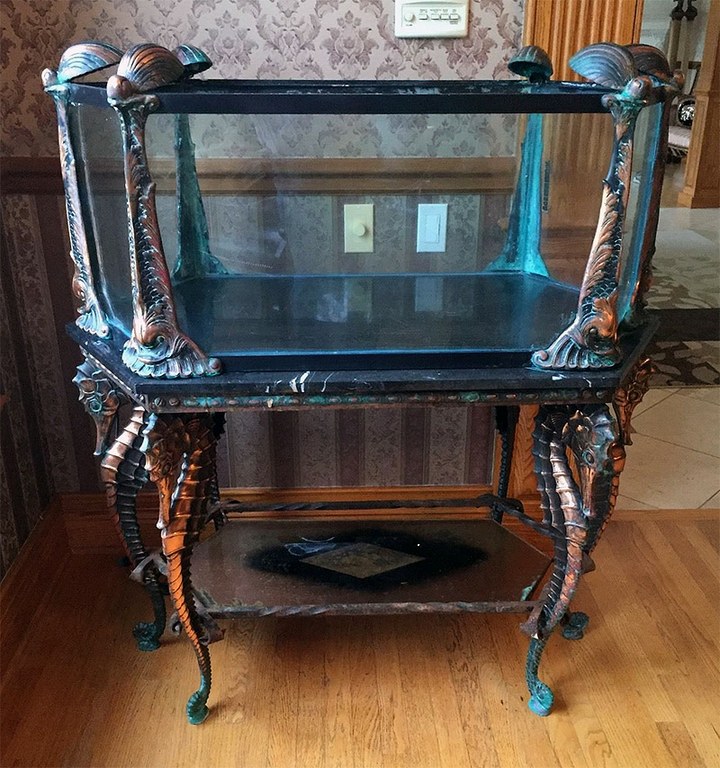 
Jewel Aquarium Company system of Chicago, IL (USA) created some of the world’s finest aquariums circa 1906 to the early 1930s.  Their most recognized aquarium featured beautiful iron legs shaped liked seahorses that were hand-hammered then coated with patina bronze.  Most of the high-end models Jewel Aquariums sold sat on full black marble slabs.  Needless to say, the whole setup is exorbitantly heavy.

A (*possible) Jewel Aquarium is now up for sale at eBay. According to the seller, this could be a replica:

“Upon further research on line, someone else writes that some guy made 6 of these models back in the early 1990’s. I didn’t buy it from this purported maker, but from an antique store called Richard O’Hares Antiques on Wells Street, who since has gone out of business. So I can’t be sure if I have a reproduction or one from 1920-1930’s since I’m not a fish tank expert. I saw it some 23 years ago in an antique store, loved it and bought it paying $18,000 for it.

Maybe someone out there knows better what it is. If it’s an antique made in the 1920-1930’s, then for sure it’s worth at least double of what I’m asking. If it’s a reproduction made later, then you still have a beautiful cast tank that’s a talk and a show piece when someone sees it. If you buy it, you will no doubt enjoy it as much as I did. I love this tank as it brought me years of pleasure. It is soothing on the eyes and magical in appearance. TRULY a rarity in antique or reproduction, whichever it is.

Another person recently contacted me and told me that it’s a reproduction and that in the 1990’s 24 of these were made and that 2 of them sold in 2014 at Leslie Hindman Auctions in the mid teens. So whichever way you look at it, my price is correct.”

If this is indeed a replica, it is a very fine replica; the details, from the patina to the marble slab, are impeccable.  For the asking price of $30,000 USD, it had better be!  Antique or replica, this aquarium gives us a glimpse of our hobby’s glorious past.

To learn more about aquarium’s fascinating and long history, I encourage you to read Dr. Tim Wijgerde’s article: Victorian pioneers of the marine aquarium.