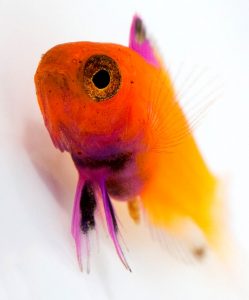 Todd Gardner, MASNA Aquarist of the Year and one of the hobby’s leading marine fish breeders joins us to announce that he is the first person to import, raise, and successfully breed Gramma dejongi. Hear how Todd acquired six of these beautiful fish and his efforts to breed and get larvae to settle. He also talks about his teaching efforts, a generous donation from the Washington Area Marine Aquarium Society, and his success in breeding and raising to market size Rainfordia opercularis, the flathead perch. Don’t miss this exciting show in which Todd shares how he, once again, has made marine fish breeding history. Download the podcast here, or subscribe to our podcasts at iTunes. Also, follow us on Twitter at reefthreads.—Gary and Christine