By Todd Gardner 4 years ago8 Comments 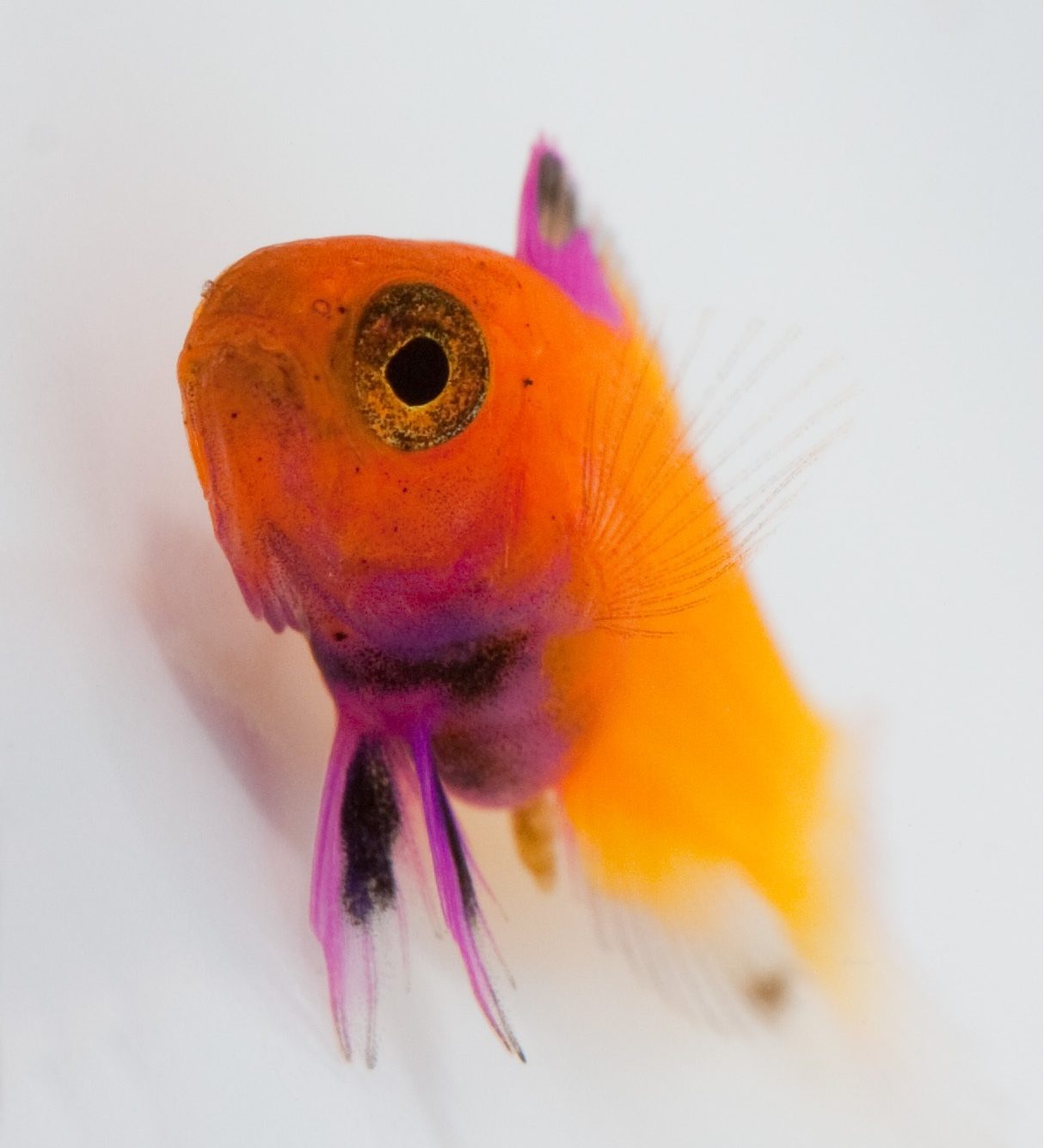 As reported on the Reef Threads Podcast, Gramma dejongi can now be added to the ever growing list of captive-bred marine fishes. Around two months ago, at the start of the their spawning season, the Gramma dejongi in my lab at Suffolk County Community College began to show signs of nest building. A few days later, I found a single larva in the Vossen larval trap I have been setting on the broodstock tank nightly since September. I removed the larva and added it to a 10-gallon plastic cylinder with some newly-hatched Gramma loreto. I wasn’t very hopeful of its chances because fish, like most other animals, often take some time to get their reproductive machinery functioning to the point of producing robust offspring. Perhaps I neglected to take into account the hearty diet offered to speed things up. Although the rearing tank was initially stocked with approximately 20 larvae in total, by the point of settlement, only 5 remained. Somehow, with brazen disregard for the typical rule of, “If you have larvae of an unknown species, it will definitely not be the one you’re hoping for,” one of the five emerged from its hiding place showing off its bright gold coloration when pigment appeared.  A second tank, containing only G. dejongi larvae, is progressing nicely, and as of this writing a second individual has reached settlement. 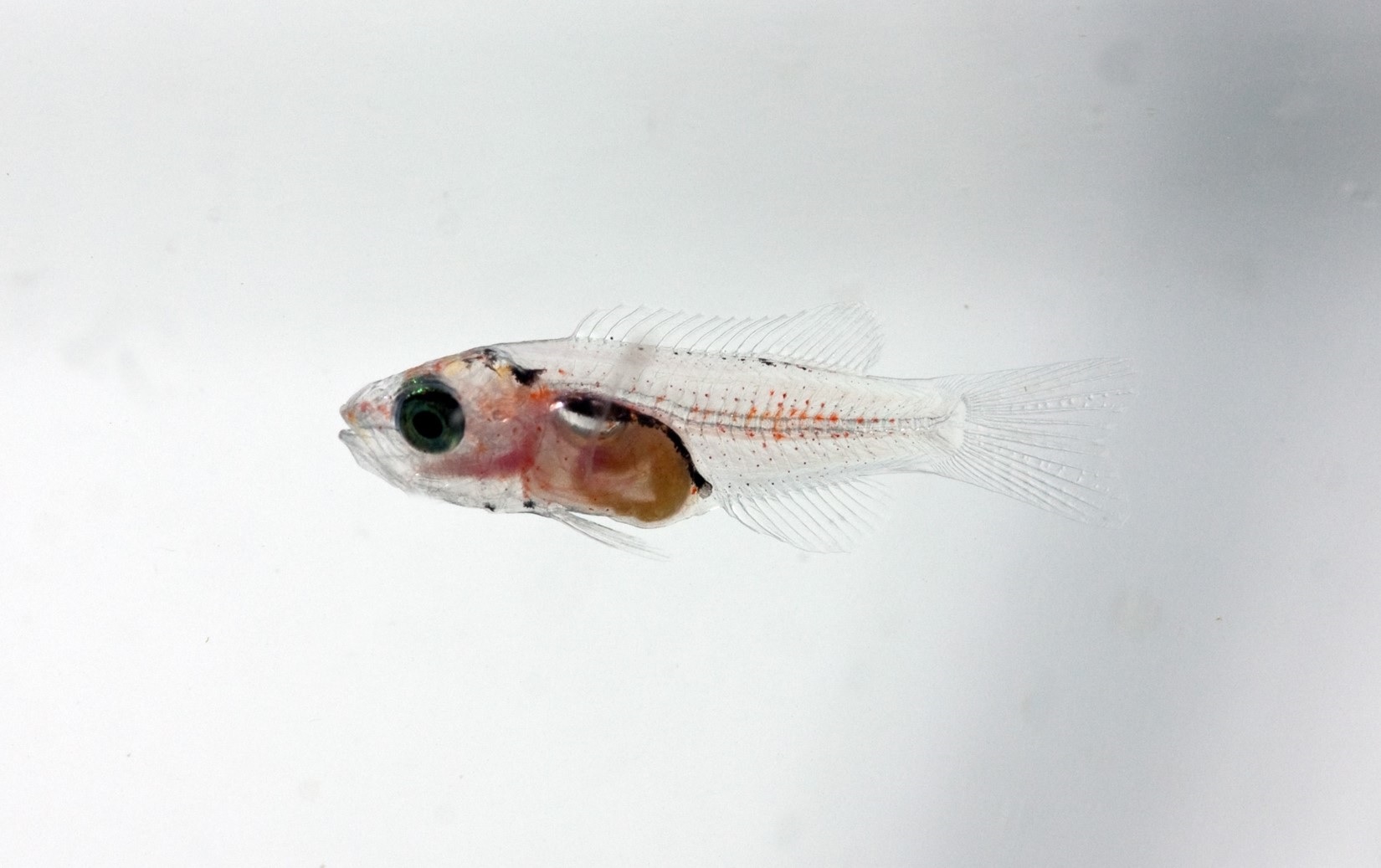 This is the first time that we have had an opportunity to make observations about the reproduction of G. dejongi,but so far, they seem to be very closely aligned with their sister species, Grammaloreto. Superficially, Gramma spp. seem pretty easy to culture, however if this were truly the case, I think we’d see a lot more captive bred ones in the trade. The fact is,Grammatids lay their eggs in nests deeply recessed in rock structures. These nests are nearly impossible to extract without causing significant disruption in spawning behavior. The result is a trickle of larvae (1-20 a night) making it extremely difficult to manage food densities or find space for larvae that are close enough in size to ensure that their younger siblings are not supplementing their diets. This is especially true when the adults are so costly that a large broodstock is not financially feasible or your lab is too small to accommodate more than a few broodstock tanks. However, these larvae are thriving on a diet of Algagen copepods in their tanks full of water compliments of ESV. Without these contributions, there would be nothing notable coming out of the Suffolk County Community College marine bio lab.

While one of the goals is to get G. dejongi into the trade, given the fact that it took years of navigating complicated government bureaucracy to secure permission to obtain these fish, endemic to Cuba, I am still unsure of their fate. Until I obtain some answers from government officials who appear to be perpetually away from their desks, they will remain in my lab. I have assured my wife that I will not risk incarceration for the sake of getting these beauties out into the world, even though I know, deep down, that getting them out there is the right thing to do, and I disagree wholeheartedly with any laws that may prevent that. Unlocking the legalities of this particular situation is proving to be at least as difficult, and not nearly as fun, as the larval rearing process itself. Until these details are worked out, I hope to share my observations about them via future blog posts. Hopefully, I will have some news of these rarely-seen specimens reaching the market through Fluid Dynamics, International in the coming months. Stay tuned to Reefs.com for continuing updates.

How I Beat Cyano