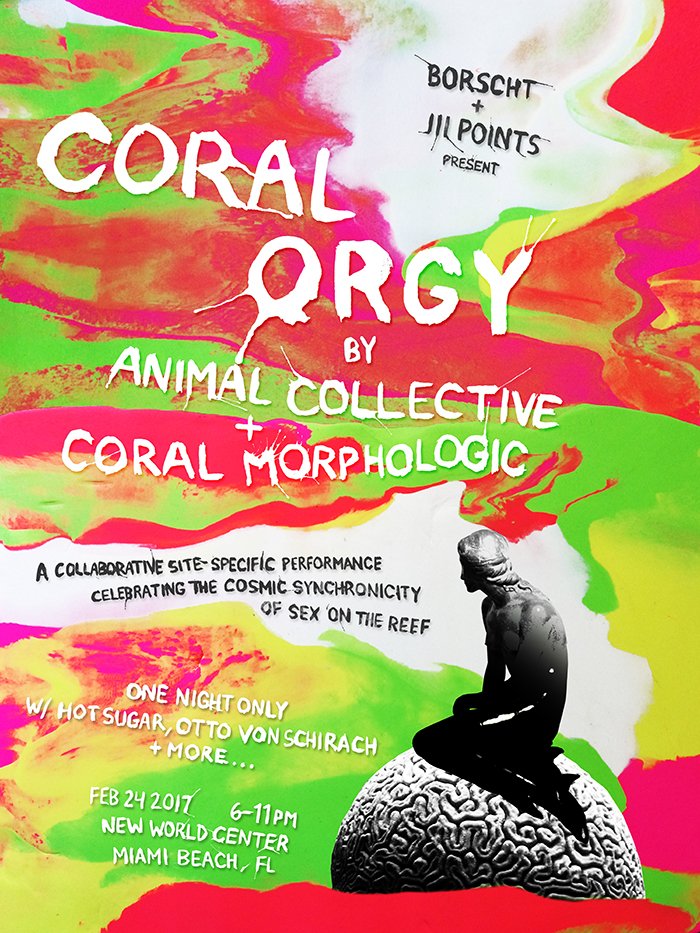 Thanks to everyone that attended the CORAL ORGY as part of the 10th Borscht Film Festival on Friday, February 24th at the New World Center in Miami Beach. CORAL ORGY was a site-specific audiovisual collaboration by Coral Morphologic and Animal Collective on the cosmic secrets behind the sexual reproduction of corals. Coral Morphologic proposes that unlocking the secrets of coral reproduction is a culminating achievement in humankind’s quest for colonization of planet Earth, and a first step towards restoring a healthy biosphere. Animal Collective performed an hour of new music inspired by the reefs while Coral Morphologic projections painted a cosmic world of fluorescent coral inside the Frank Gehry-designed room.
We are grateful to have been able to include footage of one of the first predicted stony coral spawns in captivity from Project Coral at the Horniman Museum. This advancement in coral reproduction (led by aquarist Jamie Craggs) is evidence that humanity is finally crossing this all-important milestone at just the critical juncture when the world’s coral reefs are ailing most. We are proud to support the work of SECORE and the Coral Restoration Foundation, and were thrilled to be able to display their footage of corals spawning in nature across the New World Center’s 7,000 square foot video projection wall in Soundscape Park prior to the main event.