Bobbit worms really are the stuff of nightmares 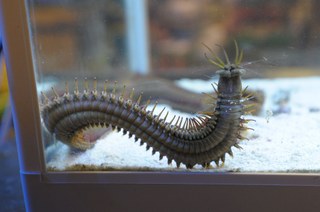 Here’s an unpleasant thought.  Monstrous worms do exist, and they can sometimes sneak into home aquaria.  If you’re suddenly and unexplainably missing fishes and entire coral colonies, you may have a monster in your tank.  Here are three accounts of bobbit worms sneaking into reef tanks that will keep any reefkeeper up at night.

The first such account is the famous bobbit worm found in a LFS (Maidenhead Aquatics) in Woking, UK.  The staff made the startling discovery while performing maintenance on their 200 liter (50 gallon) reef tank.  More frighteningly still, upon handling, the worm separated into three sections.  While the tail section eventually died, the two other sections survived.  The lesson to be learned: if you discover a bobbit worm in your reef tank, don’t try to hack it to death.  You may just double your trouble.

While he was tearing down his reef, this British reefkeeper (the Brits sure have bad luck with bobbits!) discovered a 3-foot-long worm had been hiding in his aquarium.  This worm became a viral internet sensation for obvious reasons.

And to prove it’s not just the Brits who find bobbit worms in their reef tanks, this was American reefkeeper Steve Weast’s (AKA Oregon Reef) jaw-dropping 7-foot-long Eunicid (read his story here) he discovered living inside PVC rock-support structure.

I read this story in the early 2000s, and it was the first time I realized that these terrifying worms hitchhiked into aquariums.  I am not afraid to admit it that for months, this made me seriously question sticking my hands in dark areas within my own reef tank.

Springer’s Dottyback in the Wild