A Brief Word On Silversides…

Odds are, if you’re at all familiar with silversides, it’s from having fed their defrosted corpses to a larger carnivore. But while they may be little more than baitfish to aquarists, in the wild, these humble fishes are a particularly abundant and important part of coral reef ecosystems. With that in mind, let’s take a moment to explore this underappreciated group and answer a few basic questions about their biodiversity.

In the grand scheme of fish evolution, silversides are classified within the Order Atheriniformes, which finds its closest relatives among groups like the half-beaks and flyingfishes (Beloniformes) and the killifishes and live-bearers (Cyprinodontiformes). These three orders share a number of morphological traits, though none are terribly obvious without dissection. Perhaps the most unique feature can be found in the testis, which have their sperm-manufacturing cells (spermatagonia) confined entirely towards the far end, rather than interspersed throughout.

Whitley’s Silverside (Hypoatherina tropicalis), illustrating the basic morphology of the Old World Silverside family Atherinidae. The genus Hypoatherina has ten species and, together with the closely related Atherinomorus, comprises most of the reef-associated Indo-Pacific silverside biodiversity. The two genera are told apart by the shape of their premaxilla. Credit: John Randall / Fishbase

The name “silverside” is actually given to a few different lineages within this order… basically anything with a silver color fits the bill. The most diverse of these, with over 100 known species, are the so-called Neotropical Silversides of the Atherinopsidae. These have a non-protrusible upper jaw (premaxilla), which serves to separate them from the Old World Silversides, whose 75 species are classified in the Atherinidae. Though the two groups look remarkably similar at first glance, the latter family is actually far more closely related to rainbowfishes, as can be seen in the phylogenetic tree shown below. 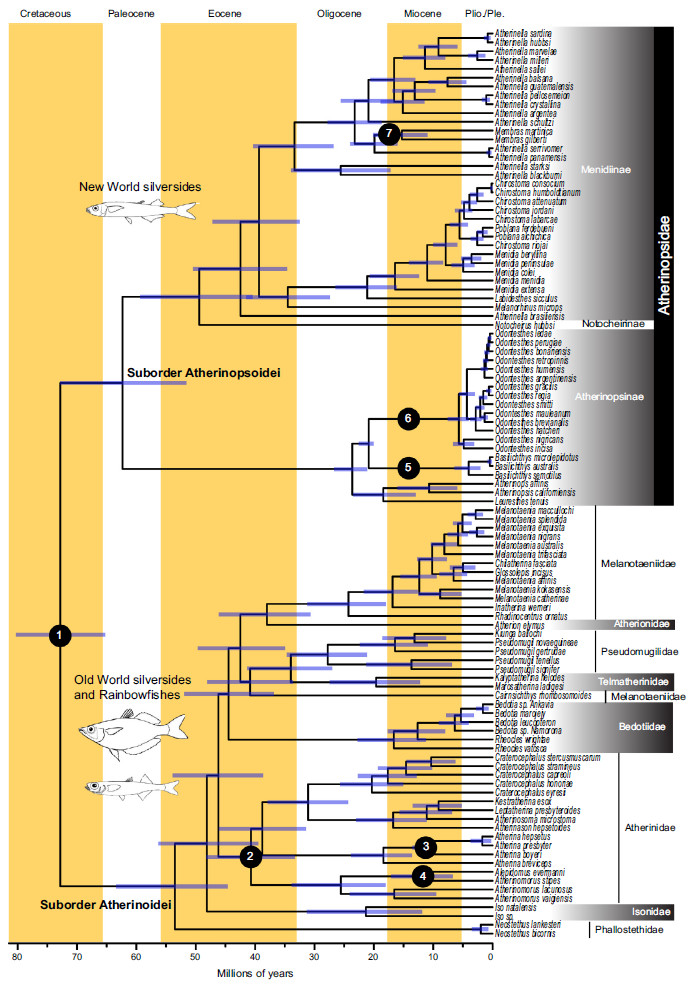 A third family—the Dentatherinidae—has just a single species, known as the Tusked Silverside due to its specialized jaw morphology. There’s also the newly recognized Atherionidae, the Bearded Silversides, with three species that are unique in having teeth (actual teeth) on the outer margins of the mouth. And rounding out the order is the Isonidae, whose handful of species resemble a deeper-bodied silverside with a herring-like keeled belly. Strangely, these are known commonly as Surf Sardines (despite being quite distant relatives of the true sardines), while one species, Iso rhothophilus, has perhaps the most poetic name of any fish—Flower of the Waves. 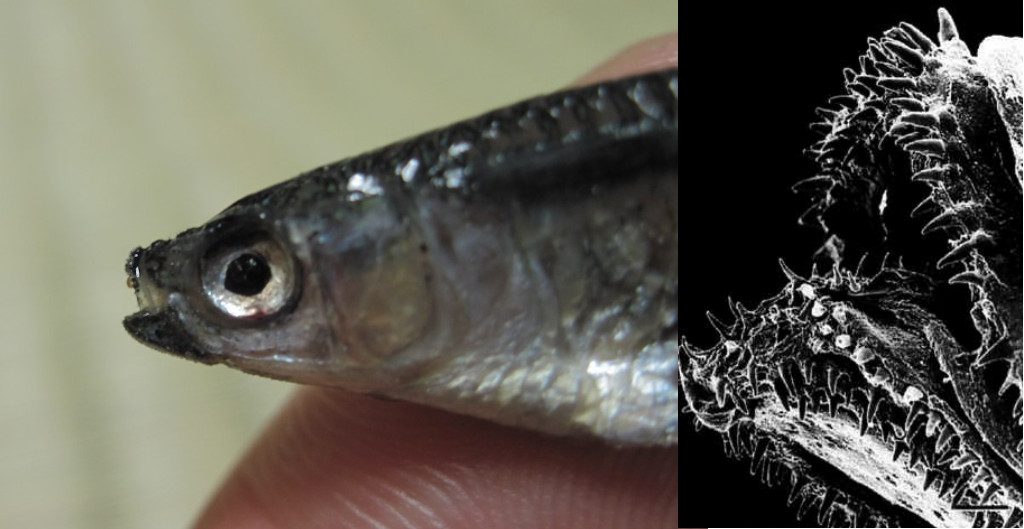 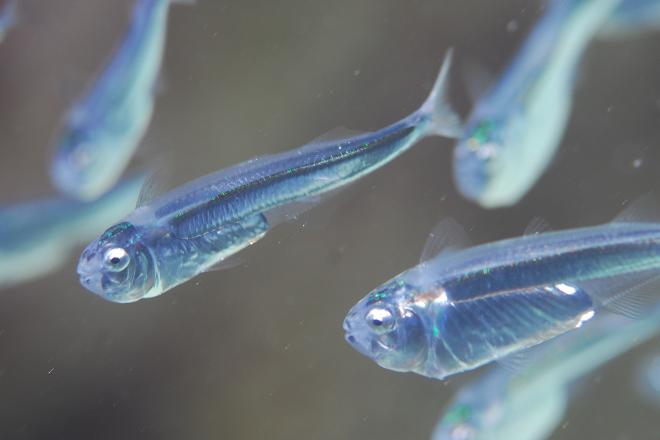 Surf Sardine (Iso sp.), the “Flower of the Waves”. Note the deep body in this group, an adaptation for the heavy surf it swims through. Credit: Yusuke

All of these various silverside groups make their living in shallow-water habitats, mostly in tropical or temperate locales, where they feed voraciously on zooplankton and benthic invertebrates. Many live in sandy lagoons or adjacent to coral reefs (yes, these are actually reef fishes), but others are more associated with mangroves or estuaries, while the highly specialized species in Iso specialize in heavy surf conditions.. Additionally, there have also been a number of lineages which have independently evolved to inhabit freshwater habitats. In Australia, one such freshwater atherinid in the genus Craterocephalus has even been reported from waters spanning a temperature range of more than sixty degrees (from 48-109℉)! These freshwater silversides (known locally as hardyheads) are seen regularly in the Australian freshwater aquarium hobby, but are seemingly unavailable outside the region.

Though most silversides measure in at only a few inches in length, the largest of the bunch is a species known as the Jacksmelt (Atherinopsis californiensis), an 18-inch bruiser that resides from Oregon to Baja and which is fished commercially for human consumption. The famed Grunions of California, renowned for their bizarre beachfront breeding runs, belong here as well, as does the Argentinian Silverside (Odontesthes bonariensis), another sizable fish used in Asian cuisine. These all belong to the Atherinopsidae, whose members are found exclusively in Nearctic and Neotropical waters.

Elsewhere, in the Indo-Pacific, there are roughly two-dozen species of marine atherinids, all of which appear more or less equally mundane in their appearance. These are the species most likely to be collected for the aquarium trade, though it is quite rare to actually find them being offered. Unlike with freshwater aquarists, the marine side has yet to develop any real appreciation for drab fishes like silversides, so we tend to see them far less-often than one might expect given their huge abundance in the wild. Of course, this is a group which really only looks good if kept in a suitably large group housed within a suitably large aquarium, so as to allow the innate schooling behavior to be recreated. A single silverside kept in captivity must be a lonely creature indeed. 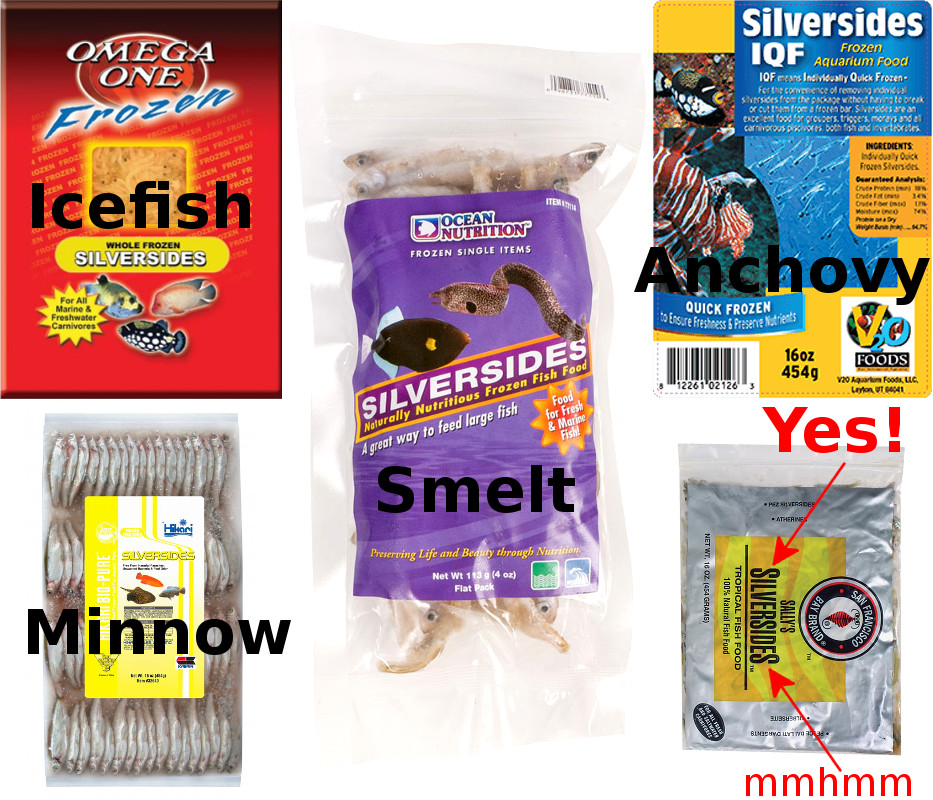 In wrapping this discussion up, a word must be said regarding the use of silversides as an aquarium food. As is often the case, common names can be highly misleading, and, as it turns out, not all silversides are created equal. For instance, Hikari used to sell a silvery species of cyprinid minnow (Pseudohemiculter dispar) under this name, though they have recently changed this to a freshwater smelt (Hypomesus olidus), which happens to be the same species marketed by Ocean Nutrition as their “silverside”. V2O Life sells another non-silverside silverside, namely, the Blue Anchovy (Stolephorus sp.), while Omega One has mislabeled a teeny tiny creature known as an Icefish (Hemisalanx brachyrostralis).  For those keeping track at home, minnows, sardines, anchovies and icefishes are not silversides and actually belong to some very distinct and distant fish lineages. The only true silverside available for sale these days is from San Francisco Bay Brands, who offer up the atherinopsid Menidia menidia, a species that is confusingly collected from New England (and not the Bay area).

How I Hit The Live Rock Mother Lode!