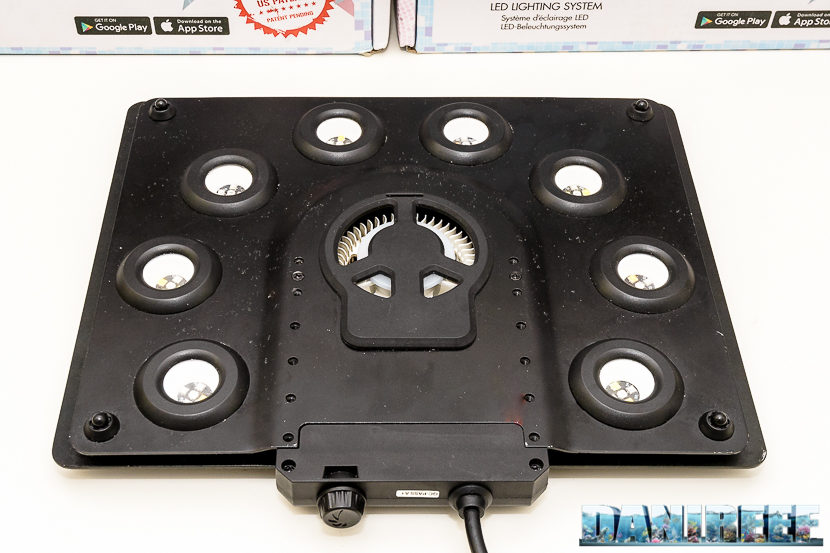 Here is our current analysis; we will be following up with an additional review once we have collected more information about its daily use and

Technical characteristics of the Maxspect Ethereal


There are five channels that can be individually managed, which means thatthere are many types of led that are controlled together. 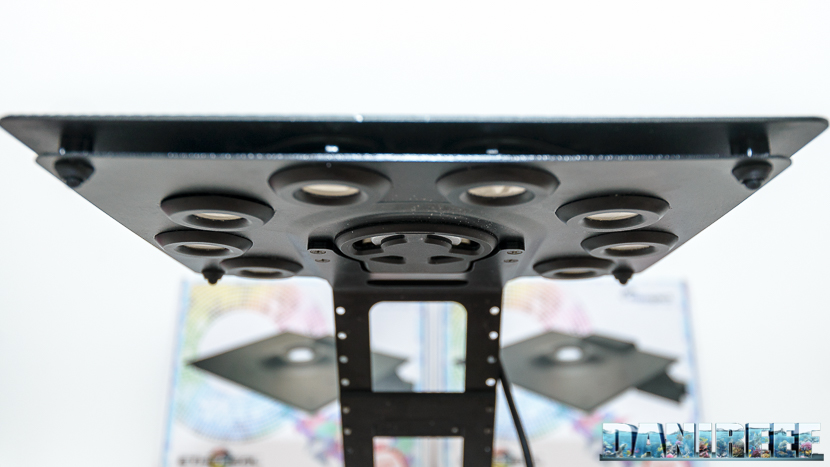 The Maxspect Ethereal is well-built, with a remarkable design; they are small, lightweight, and have an adjustable support for the glass. There’s a noticeable difference between these lights and the Philips CoralCare, recently reviewed on this site (article). The Maxspect ceiling lights are passively cooled by a very quiet fan, regulated by an inner thermostat. 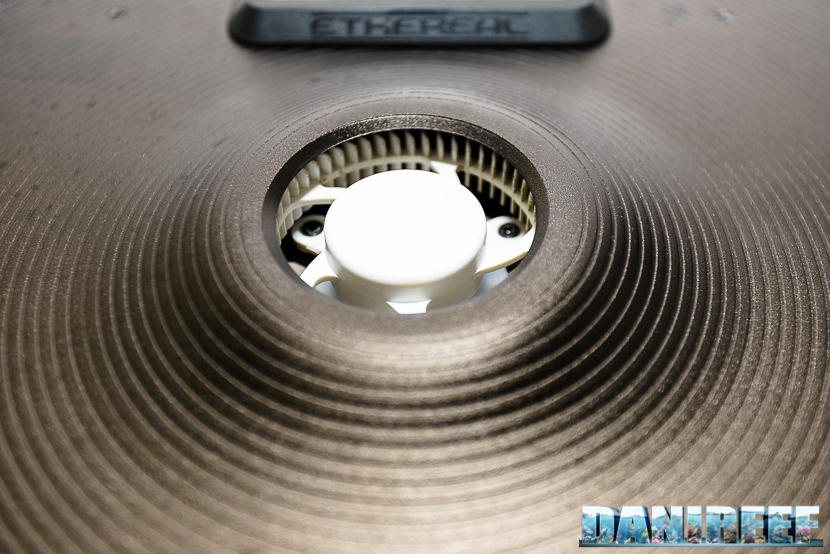 The programming software can be used only by smartphone and tablet, and it works with the (optional) control module ICV6. You have to download a free app to create curves for its use during the day. As you can see from the curve we’re using, we have divided the 5 channels, in different hours, by the switch on and switch off and for a slow dimming.

We like the factory’s programming, where the light’s curve has all the channels at 100%, besides channel B, which is set at 70%.

Technically there aren’t lunar phases but it’s possible to create a nocturne halo with the fan illumination. It can be set on many different colors and intensities, and works quite well. 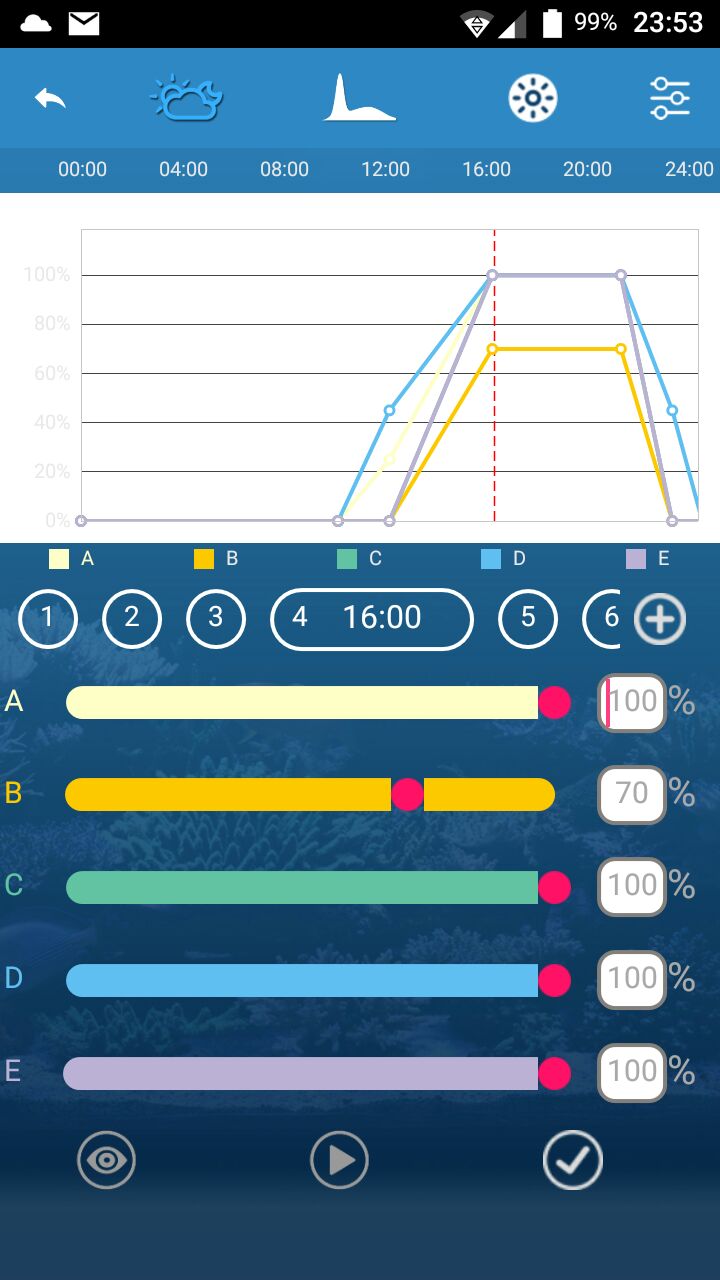 The programming is extremely simple, though a bit laborious, because for each point (hour) it’s necessary to define the specific percentage of each of the various channels. The ceiling light will take care of the dimming or brightening of the LEDs between the different set points.

We conducted measurements with the Seneye Reef system probe that we reviewed a few years ago (we can’t say anything sure about the corals yet). Its software has been recently updated, and can measure lux, PAR, and PUR. 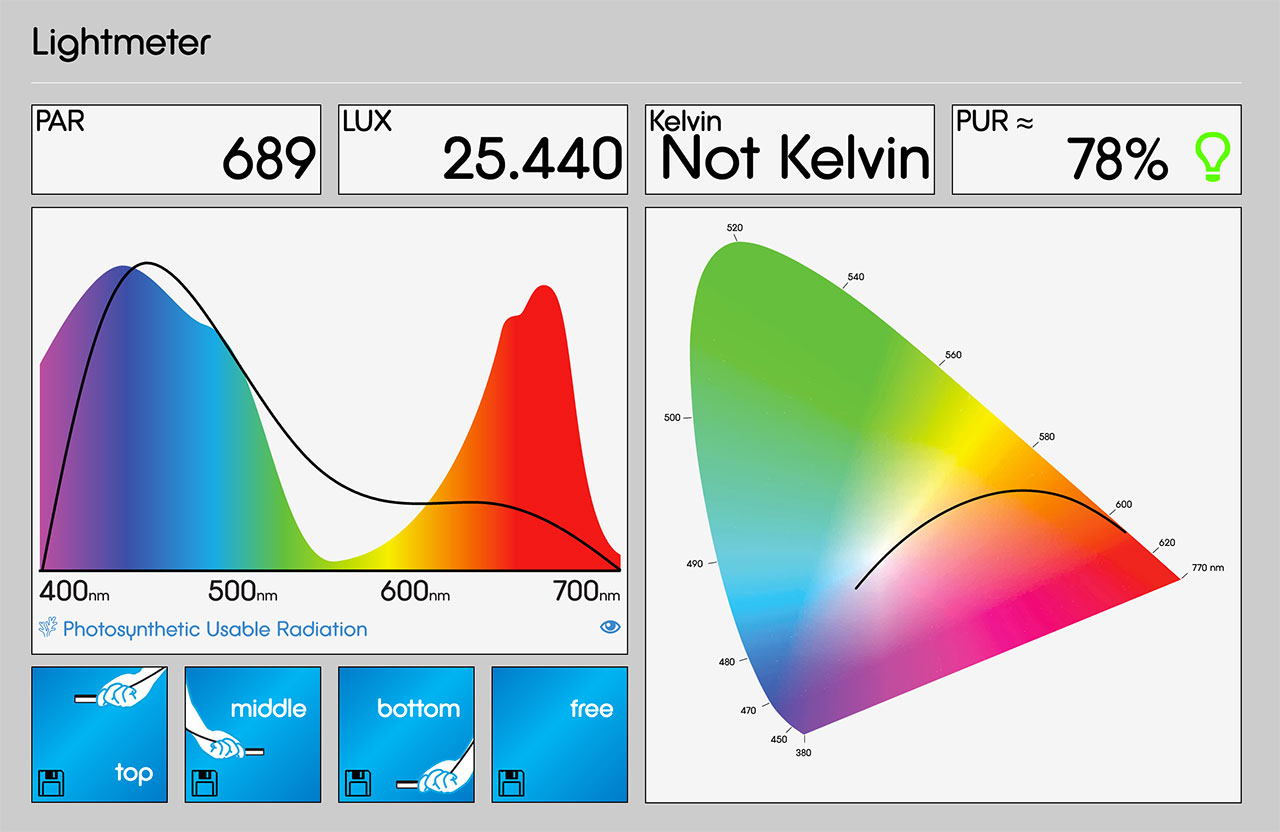 As you can see from the graphic, these are the obtained measurements:

And now the 5 channels individually:

We already highlighted that the PAR value is very close to the declared value, but for each channel (and the total of all channels) it is possible to see a small curve, deduced by the resulting spectrum. The colored spectrum under the curve should be the correct spectrum for the coral measurements.

The comparison with the other ceiling lights in the market

We took a look at previous measurements, done on comparable ceiling lights. In particular, we compared the values of the Philips CoralCare (article) and the GNC 466 (review). The Philips registered 1,496 PAR and 55,230 Lux; the GNC, 696 PAR and 25,697 Lux. Considering these data, we have: halved values compared to the Philips, and the same levels as the GNC. A very good result, considering the prices.

The Lux per watt is similar to the GNC, and the range of the surface is lower than the Philips, but it’s a very good option for the price. Its coverage ability is optimal on tough SPS corals in a 50 x 50 cm area. 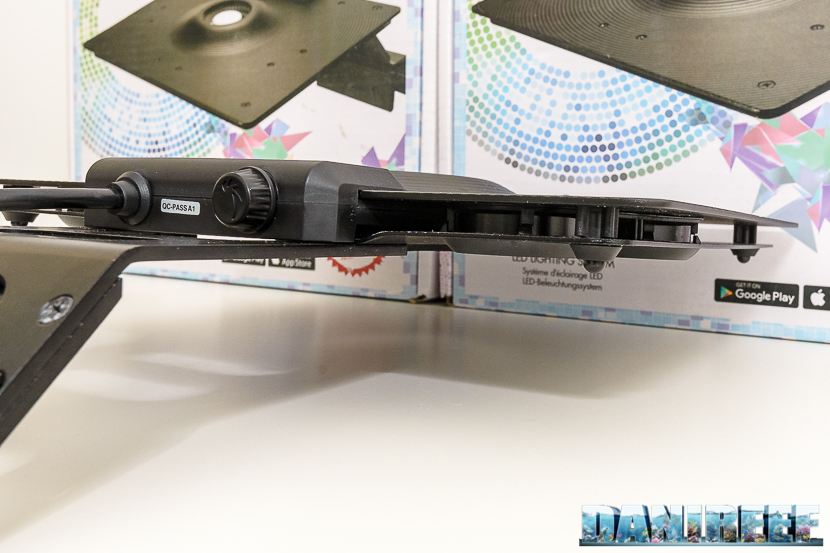 The comparison with a radion G2 PRO, the newest radion we could test, has a value of 2,117 PAR, 78,049 Lux and a PUR of 72% (at the center of the ceiling light). But remember that the Radions are cluster-type lights, they have higher values at the center of the ceiling light, but they quickly decline as we move away from the center; in comparison, the Maxspect Ethereal, the Philips CoralCare, and the GNC 466 have their LEDs spread on a wider surface, which assures a more uniform coverage.

The survey of the instant consumption is possible thanks to the RCE PM60, an instrument that measures the Cos(fi). The result is directly reported in watts. 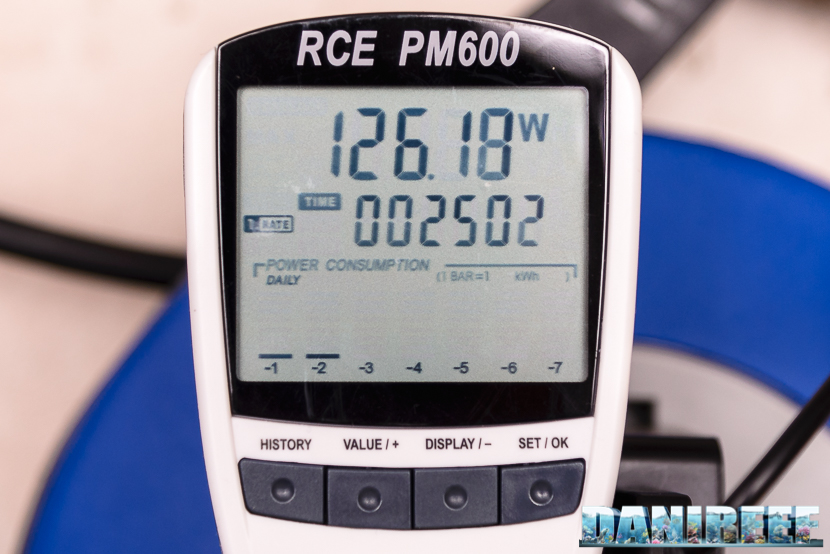 This is the calculation of the current consumption (the power):

We also measured the Cos(fi). 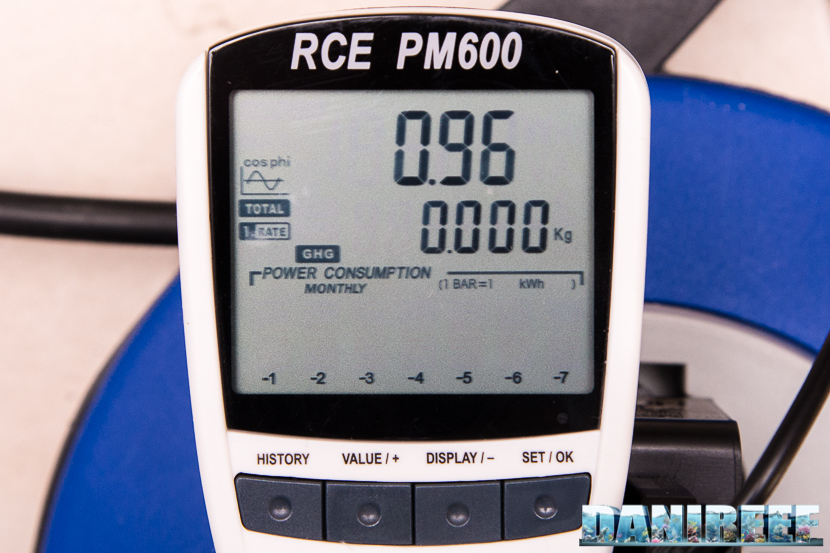 The power is 126 watts, so there’s a cost/watt relationship of about  3,8 € for each watt. The best we’ve ever encountered. In the chart below, you can compare this light with the other ceiling lights we have tested.

This ceiling light impressed us with its appearance and its quality illumination. We’re currently testing it in real conditions to see how it behaves with corals. 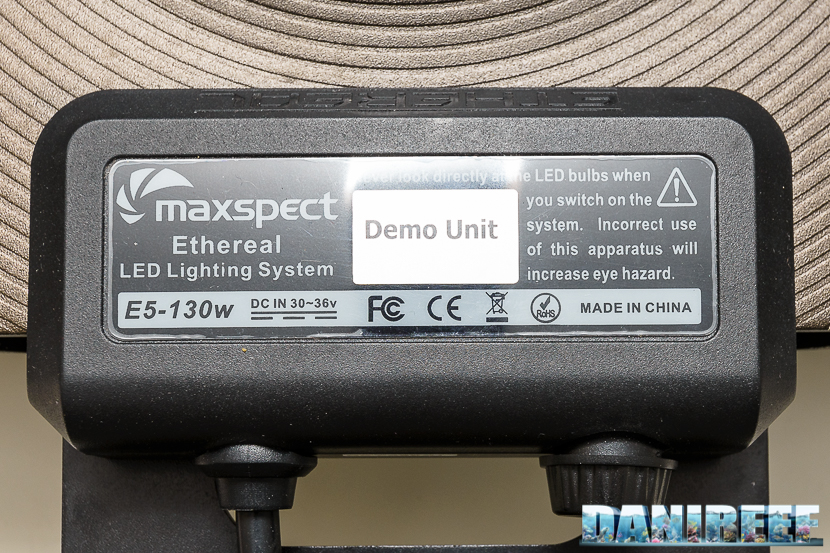 We can’t write proper conclusions because we haven’t yet completed the test on our aquarium, but we can report on what we have observed so far. 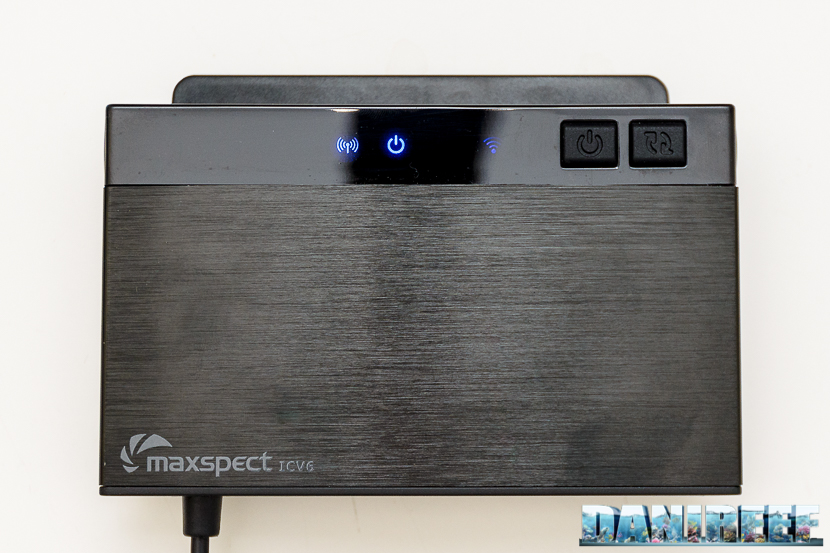 The ceiling light is well built, thin and lightweight, and it has the best price per watt of the category. It’s stylistically modern and captivating, and the light distribution seems optimal. Right now we’re using three of them to light up a 160 x 80 x 50 aquarium, and we think a fourth would be unnecessary (we’re waiting for the confirmation of these results from the corals).

Simple to program, even if the programming is a little to long to complete.

The specific power is very high and thanks to our measurements we think it could easily handle a 50 x 50 cm surface, or the 60 x 60 cm surface of a cubic aquarium.

We will talk about it again, but if you have any questions, we’re available.