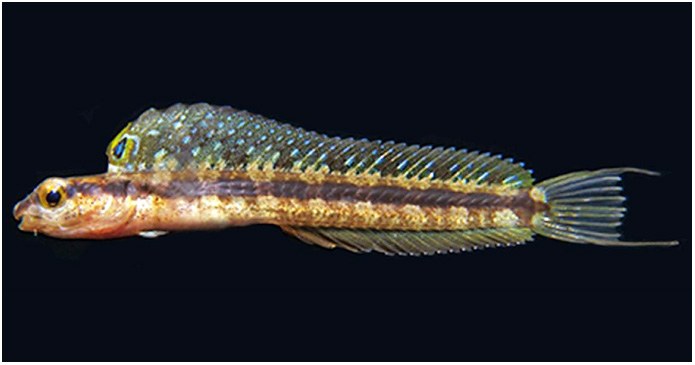 Adelotremus deloachi is only the second recognized species of the genus.  The first Adelotremus species, A. leptus, was discovered in the Red Sea living in similar mucky substrates (lots of silty sand).  A. leptus was only described in 2012.  Now, it has a new congenor in the Indo-Pacific, A. deloachi.

Both are cryptic and flighty species and therefore are rarely observed; They spend their days in holes in the sandy substrate with their heads poking out (much like garden eels), retreating into their holes when spooked.  It’s thus not surprising this genus has evaded detection for so long.  Leave it to Ned’s keen eye to spot this species previously unknown to science.

The author of the paper, William Smith-Vaniz, writes:

This new species is named Aledotremus deloachi in honor of Ned DeLoach in recognition and appreciation of his books, magazine articles and photographs that celebrate the beauty and diversity of reef fishes, all of which have encouraged numerous divers and fish watchers to become more aware of the importance of protecting the threatened marine environment and fauna.

We could not have said it better ourselves.  Congrats, Ned!

Aledotremus deloachi peaking its head out of the muck.  Photo by (who else) Ned Deloach.

How to Set a Mono Pump Skimmer for Optimal Performance