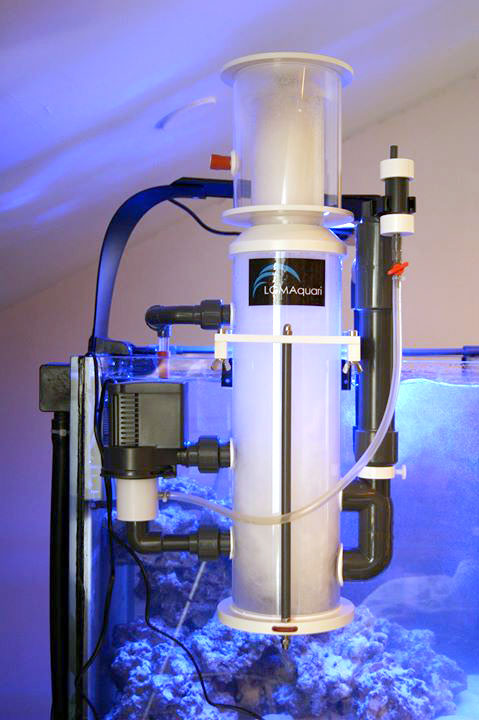 A real protein skimmer to hang on your tank, very good news which will solve many problems for hobbyists without a sump.

When tanks don’t have a good-volume sump, proper filtration can be a real issue. So far, the best performing skimmers have been the Aquamedic Turboflotor 1000 multi SL and the Deltec MCE 600, products which were already around when I first approached the marine aquarium hobby in 2001. They were even the topic of some of the first reviews I wrote about the subject.

Things have really changed since then, but there haven’t been any new, “modern” skimmers produced of a certain quality.

As there is a high demand for hang-on skimmers but a limited choice availability, Geppy, LGMAquari deus ex machina, has created an extremely interesting hang-on skimmer prototype ready to be released into the market.

The LGS600SP is designed to be hung laterally on the tank, a new adaptation which will soon be available for the smaller LGS450SP as well.

In the picture above, you can see the prototype with a hand crafted harness, but the pieces will soon come out of CNC machines. The differences between the standard LGS600SP and LGS450SP are due to the adjustments needed for the product to be hung, as following:

The harness holding the skimmer body has been very cleverly thought out and built. The skimmer does not lay on it, it is rather distanced from the frame by 4 small and soft silicone cylinders which help muffle vibrations.

At the base, there are two more spacing elements of red silicone to adsorb the vibrations, which would otherwise be passed to the glass.

The harness is removable so that the skimmer can be also be used as a normal sump protein skimmer. Moreover, it can be mounted on either side, so you can hang it on the right or left tank glass. It can be mounted on glass from 8 to 12 mm thick, can be adjusted for depth, and on request it can be made to be hung on to 15 mm thick glass.

A supply pump has to be inserted in the tank for the skimmer to function. The only caution to have is to mount a protective grid on it.

The harness price is € 120. It is a fair price to add to the skimmer to have it perform as though you had a sump. Actually, it may perform even better, considering that it will take the water straight from the tank without the return pump interference!

What do you think about it? Do you like this idea?