This new hermit crab is a lovely weirdo 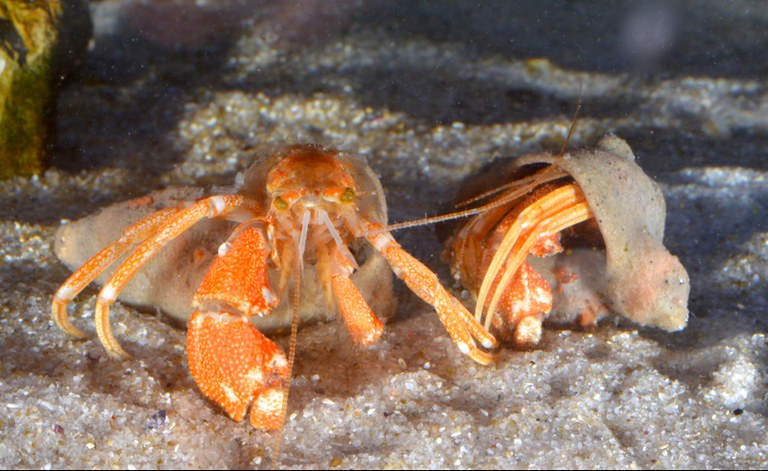 The “shells” of Paragiopagurus atkinsonaeis is custom-built for them by zoanthids (which are unfortunately dead in this photo).

‘Green-eyed hermit crab’ is the common name for a new species recently discovered off the West Coast of South Africa. Apart from its magnetic stare, however, there is a number of characteristic morphological traits and an unusual home preference that all make the crustacean unique.

The Green-eyed hermit crab measures merely 70 mm in length and sports a coloration of mottled orange nuanced with cream to white. Among its distinct traits is the significant sexual dimorphism, where the males grow much larger right chelipeds in comparison to females.

Much like other hermit crabs in its family (Parapaguridae), the little crustacean does not use the shells of other molluscs to shelter its vulnerable body, but rather finds a home in the soft, polypy masses built from sand and material created by sea anemones which go on to live on the backs of these crabs in an amazing symbiosis.

“So, when you hold it [the hermit crab], it’s just organic material glued together with some sand,” explains Jannes in the UCT’s announcement about their discovery.

“Even more curiously, parapagurids start off in the usual way, occupying a tiny gastropod shell. But these eventually become deposited within this non-calcified ‘amalgam’ created by the anemones. As the hermit crab grows, its live ‘shell’, or carcinoecia, grows with it.”

The new species was discovered during a three-week survey back in 2013, conducted by the Department of Forestry and Fisheries and the South African Environmental Observation Network in the shallower deep waters (199 m to 277 m) off the West Coast of South Africa. Lara was on board one of the vessels when an unusual green-eyed crab turned up among the numerous specimens collected in one of the trawls. It was at that moment that she noticed that there was something peculiar about it and sent it for identification.

Restricted to a surprisingly small area for no obvious reason, the new species might be just bringing up some very important conservation messages.

“The area isn’t noticeably biologically or oceanographically distinct, but more detailed sampling from the area will tell us more about the habitat conditions. Future studies need to take this into account and give the area more research attention. If there’s something unusual about the site, you’d want to be careful, especially with mining operations along the West Coast,” says Jannes.

“Incidents like these are flags for future protection. The bottom line is we know so little about these offshore habitats from an ecological point of view. And if you’re planning for a marine protected area, you have to know what it is you’re protecting in that area.”