Sandperches are a hugely diverse and surprisingly ubiquitous part of the Indo-Pacific fish fauna, but, despite their abundance in the wild, few ever seem to make it into the confines of an aquarium. Only one or two species are regularly collected, but even these “popular” examples are still relatively unpopular with aquarists. In fact, I would wager that most aquarists wouldn’t know a sandperch if it smacked them in the face. But why?

First, we should take a moment to introduce this group. Sandperches are classified in the family Pinguipedidae, which are now thought to be close relatives to the stargazers (Uranoscopidae) and Sandlances (Ammodytidae). These are all relatively elongate, carnivorous bottom-dwellers which share a greatly lengthened dorsal fin shape, though it’s only with recent genetic studies that the makeup of this lineage has begun to be put into its proper evolutionary context among the perch-like fishes.

The bulk of pinguipedid biodiversity is currently classified in the enormous genus Parapercis, which has roughly 81 species to its name. A handful of smaller genera are also recognized, but their interrelationships within the family are still poorly understood. Many of these oddballs are considerably larger, like the Namorado Sandperch (Pseudopercis numida), which tips the scales at up to five feet in length. These odd genera also include the only members found in the Western Atlantic and Eastern Pacific, but, alas, the family has yet to receive any significant genetic study. And when discussing pinguipedids, we immediately run into a nomenclatural dilemma with regards to there being no consistently used common name for these fishes. You’ll see them called sandperches (or sand perches) quite frequently, but they also masquerade as grubfishes, weavers, sandsmelts, and, most galling of all, as cod! Of course, aquarium wholesalers have sought fit to add their own misnomer to the pile, christening poor Parapercis schauinslandii as the Sandhopper Blenny. To wit, it is not a blenny!

Of the 80 or so recognized species in Parapercis, most can be safely categorized as rather “drab” in appearance. These are, after all, fishes which abound in relatively open and unprotected habitats—sandy lagoons and rubbly areas—so it should come as no great surprise that their modus operandi is camouflage. You’ll find all sorts of stripes, spots and saddles meant to obfuscate their profile. And, perhaps for this reason, their enormous biodiversity seems somewhat interchangeable. These are fishes which, in many ways, all look the same, even when close examination reveals that they don’t. Brightly colored species are more of the exception than the rule with sandperches, which probably explains the lack of attention they receive from aquarists. But, dear reader, there are plenty of interesting examples to be found… so, without further ado, let’s delve into an entirely arbitrary top ten list. 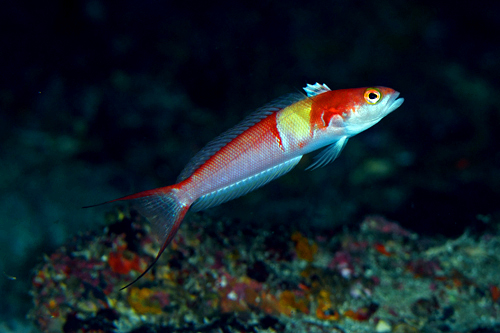 The scientific name translates fittingly enough as “swimmer”, and, as you might expect, this is the Michael Phelps of the family. The lyriform caudal fin, with its long, trailing filaments, is a clear indication of its natatory proclivities, though these extensions develop more dramatically among males. As with many of the species in this family, their is a considerable amount of sexual dimorphism present; females are infused with a soft red throughout the body, with a dorsal fin dotted by fine crimson maculations, while males boast a bright yellow saddle and clear fins. P. natator is a mesophotic species found throughout Japan, and, more recently, it has been collected in small numbers from the Northern Philippines for the aquarium trade.

The lightning bolt of yellow which runs along the back of this remarkable species is fairly unique within the sandperch family, but it’s anyone’s guess if this fish—the only member of its genus—is truly a distinct lineage. There are at least a few other taxa (e.g. P. dongshaensis, P. okamurai) which share the yellow coloration and the prominent ocellus in the caudal fin. All of these occur in deep waters around Japan, and, sadly, none have been photographed in life. They are no doubt spectacularly vibrant when observed in their dimly lit natural habitat. 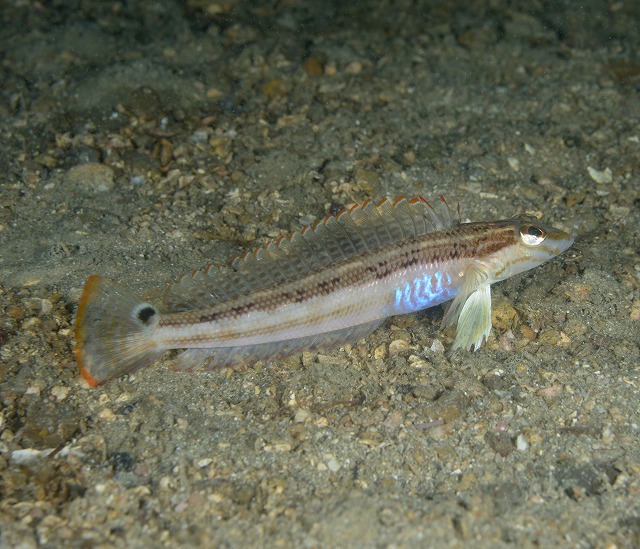 The scientific name of this fish comes from the Greek for “eye” and “tail”, in reference to the prominent ocellus seen on its rear (presumably, homologous with the marking discussed previously for the Kochi Sandperch). The intriguing blue belly, however, appears to be a unique trait among the sandperches. It occurs in temperate sandy environs of Japan and the South China Sea.

Of the 81 species of Parapercis, there are only two examples to be found in the Atlantic. One is a deepwater species from a bank off the western coast of South Africa, and the other, Parapercis atlantica, can be found in the mesophotic depths of Cape Verde, situated off the coast of Western Africa. Interestingly, these two fishes belong to very different lineages within the family, illustrating that the Atlantic has been colonized independently. But why has it been so poorly colonized? Why are there no shallow water representatives of this group in the Caribbean, for example? While Cape Verde’s unique sandperch may not be the most beautiful species we could have discussed, it is certainly steeped in some considerable biogeographical mystery.

Went and fed some Blue Cod by hand today in the Double Cove Marine Reserve. Here’s a little teaser of what went down…

This is not a cod, but it is the largest species currently placed in Parapercis, reaching upwards of a foot and a half in length. You’ll find it, appropriately enough, in New Zealand, where it is commercially fished. 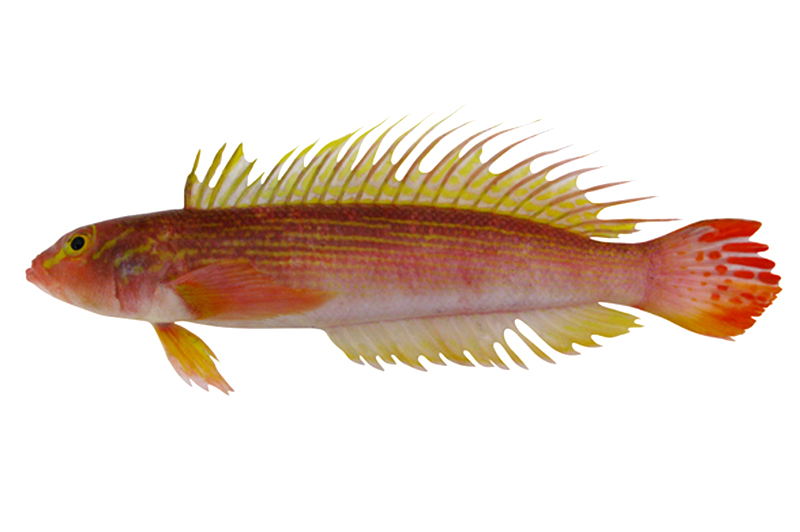 The stunning yellow and red hues of the Rosy Grubfish, along with the dramatic sail-like proportions of its dorsal fin, put it in the upper echelon of pinguipedid aesthetics. This fish is what all sandperches should aspire towards, but, for all its beauty, we still know woefully little about Ryukyupercis gushikeni. Until recently, it was considered part of the Parapercis biota, but, owing to an extra dorsal spine and a few supernumerary pectoral fin rays, this beast was dumped out into its own genus. It’s presently reported from Japan and Northwestern Australia, though it might very well be expected elsewhere in the West Pacific. It’s an open question why this fish is referred to as a grubfish rather than a sandperch, but I suspect the Australians are to blame. 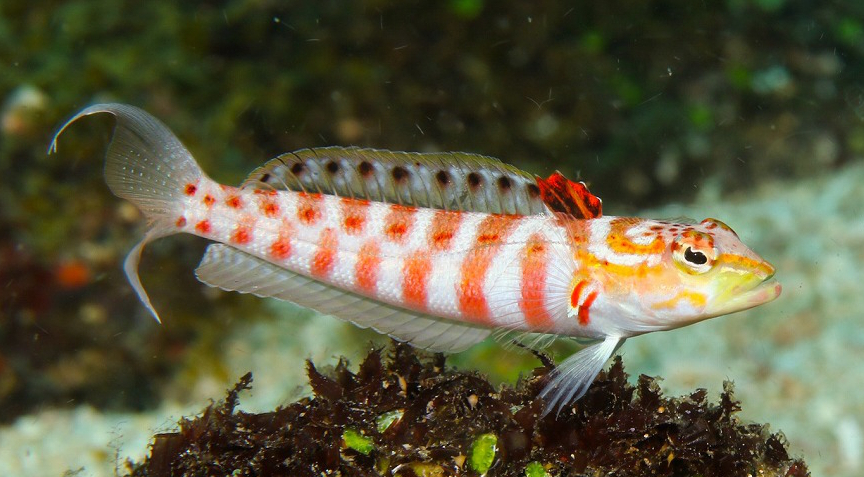 Truth be told, the Redspotted Sandperch is a sexy fish, and it’s no wonder why this is the species most commonly seen in the aquarium world. It’s tendency to actively hover above the bottom (in a manner comparable to P. natator) makes this a rather atypical member of the family. Also of note, this species is reported from a far wider range than most others in the family, stretching from East Africa to Japan, Australia and even Hawaii! A cursory glance at images of this fish from across its distribution reveals there to be a considerable amount of regional variation, which, in all likelihood, means that there are several cryptic species in need of recognition. The type location for this taxon is Hawaii, a region which tends to follow the beat of its own ichthyological drummer, so it’s quite probable that all of the Redspotted Sandperches from elsewhere in the Indo-Pacific are faux-schaunslandii, including most of those which enter into the aquarium trade.

Isn’t this fish nice? Sandperches are one of those groups which seem to get prettier the deeper down in the ocean one finds them. A surprising number of species share a similar motif as P. aurantiaca… like P. banoni from South Africa, P. roseoviridis from Hawaii, and P. phenax from Japan. There are others still, but the similarities in their appearance are likely to be independently derived in many cases. You’ll find the Orange Sandperch, arguably the loveliest of this bunch, up in Japan and neighboring waters. 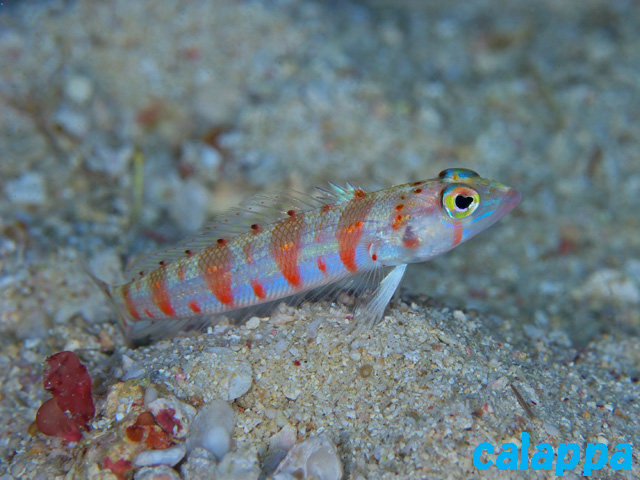 This gorgeous and little-known fish doesn’t seem to have a common name, aside from the one I just gave it. Specimens are reported from mesophotic reefs (40-70m) in Okinawa and the nearby Yaeyama Islands of Japan, though it’s likely that this species will also be found in some of the Japanophilic portions of the Philippines, like Cagayan and Scarborough Shoal. If so, P. basimaculata might one day sneak itself into the aquarium trade. The scientific name, by the way, alludes to the spots (i.e. “maculata”) of the dorsal fin, which are situated along the lower edge (i.e. “basal”). 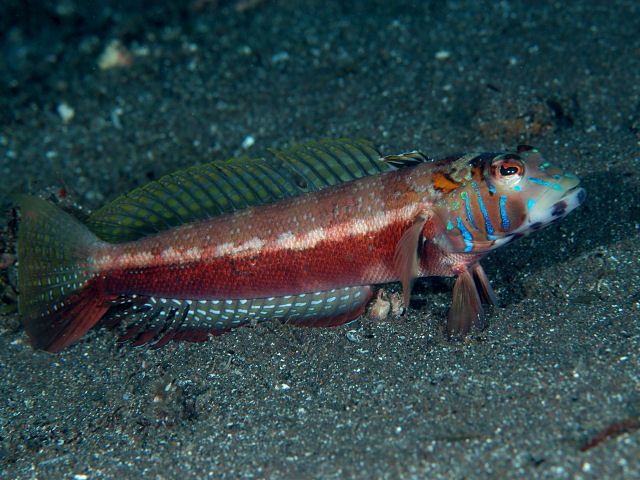 Japan seems to have a disproportionate number of sandperches in its waters, and a great percentage of these have made our humble list. For whatever reason, the Parapercis found in the shallows of the Coral Triangle are rather mundane in comparison. Take, for instance, the newly described P. binotata from the Solomon Islands— a fish so lacking in verve that I didn’t even bother to write of its discovery this week (though, if you’re the inquisitive sort, you can read more of it here). The Harlequin Sandsmelt, on the other hand, is a wondrous creature whose males come bedecked with a rouged belly and a series of caerulean stripes adorning the head like so much piscine warpaint. Seen atop the grey, aqueous sands it calls home, the sight of two rival males vying for territory must be a breathtaking sight to behold. The species’ epithet pulchella, which comes to us from the Latin for “a little beautiful”, is clearly in error—this is a fish of great beauty. But, in truth, sandperches are almost universally attractive, to say nothing of their curious and engaging personalities. I’ve never understood why they aren’t more beloved…