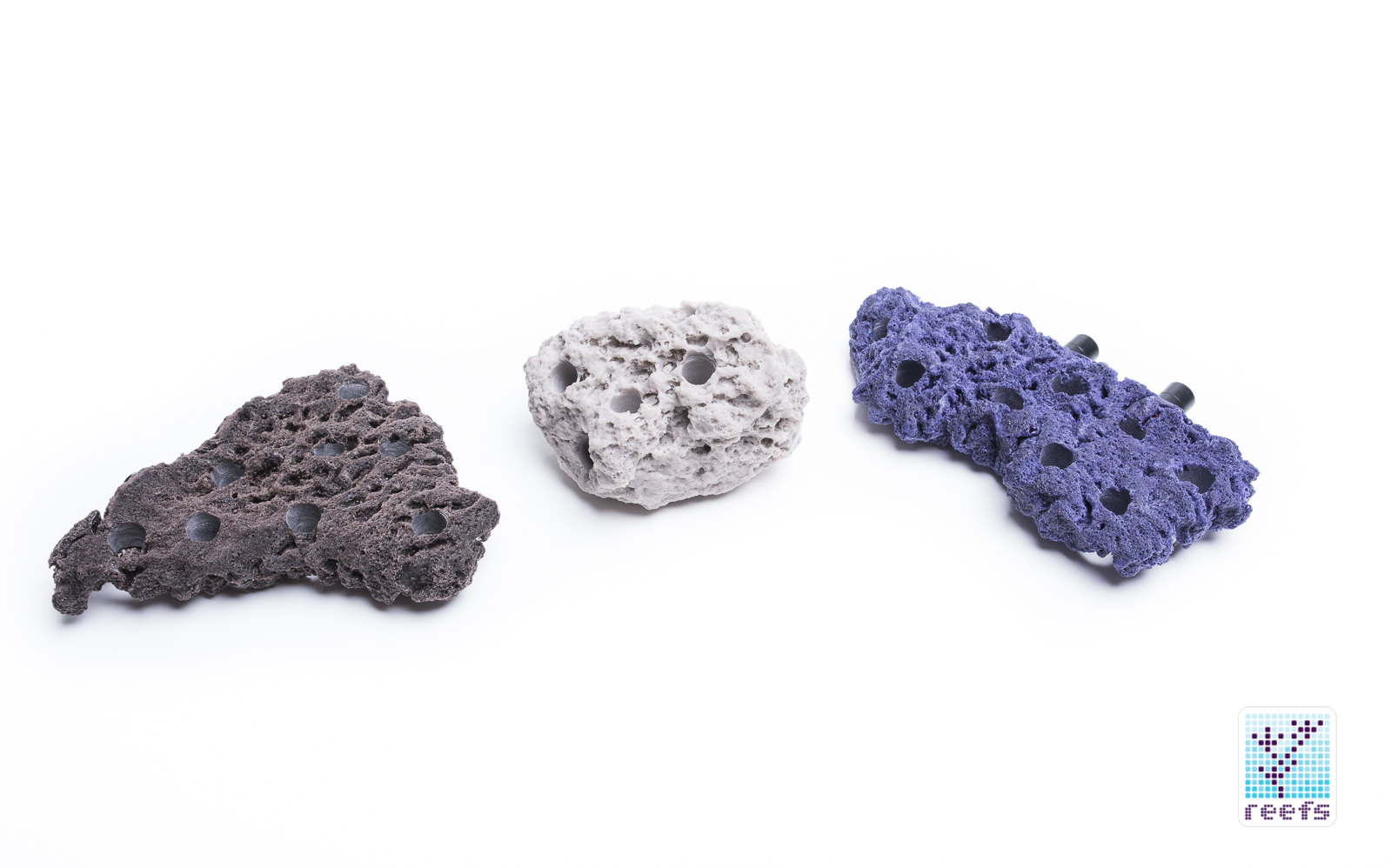 Frag racks. Almost everyone knows what they are but most of us are not fortunate enough to have a dedicated coral propagation system, and therefore need to deal with their presence in a display tank. Meticulously hidden from view, tucked in the dark corner of a reef aquarium, frag racks are considered an eyesore to the overall beauty of an underwater garden. But having a frag rack in the display tank is most often not a choice, but a necessity. Fragging happens, intentionally or not. In a system full of thriving corals, a simple maintenance session involving one’s hands in the tank can produce several accidental frags that have to go somewhere.

Frag racks are a godsend when a special condition in a reef tank occurs: lack of usable space. Through my years of experimenting with my reef aquaria, I have found that the best answer to the lack of “real estate” inside the tank is to utilize magnetic frag racks on the side and back glass panels, as well as the overflow box. Some corals adapt easily to the vertical space available- for example, I have a love / hate relationship with GSP (Pachyclavularia sp.)- I really like that coral, but I don’t want it to spread uncontrolled, choking and killing other corals in its fight for dominance. My solution to the problem is to mount the coral on a vertical surface, away from its tankmates.

This method works wonders- I can still enjoy the green, wavy ballet of GSP “dancing” in the flow, while a scraper razor is all I need to control it. Unfortunately, not all corals can be grown that way- some simply need the horizontal area to grow successfully. 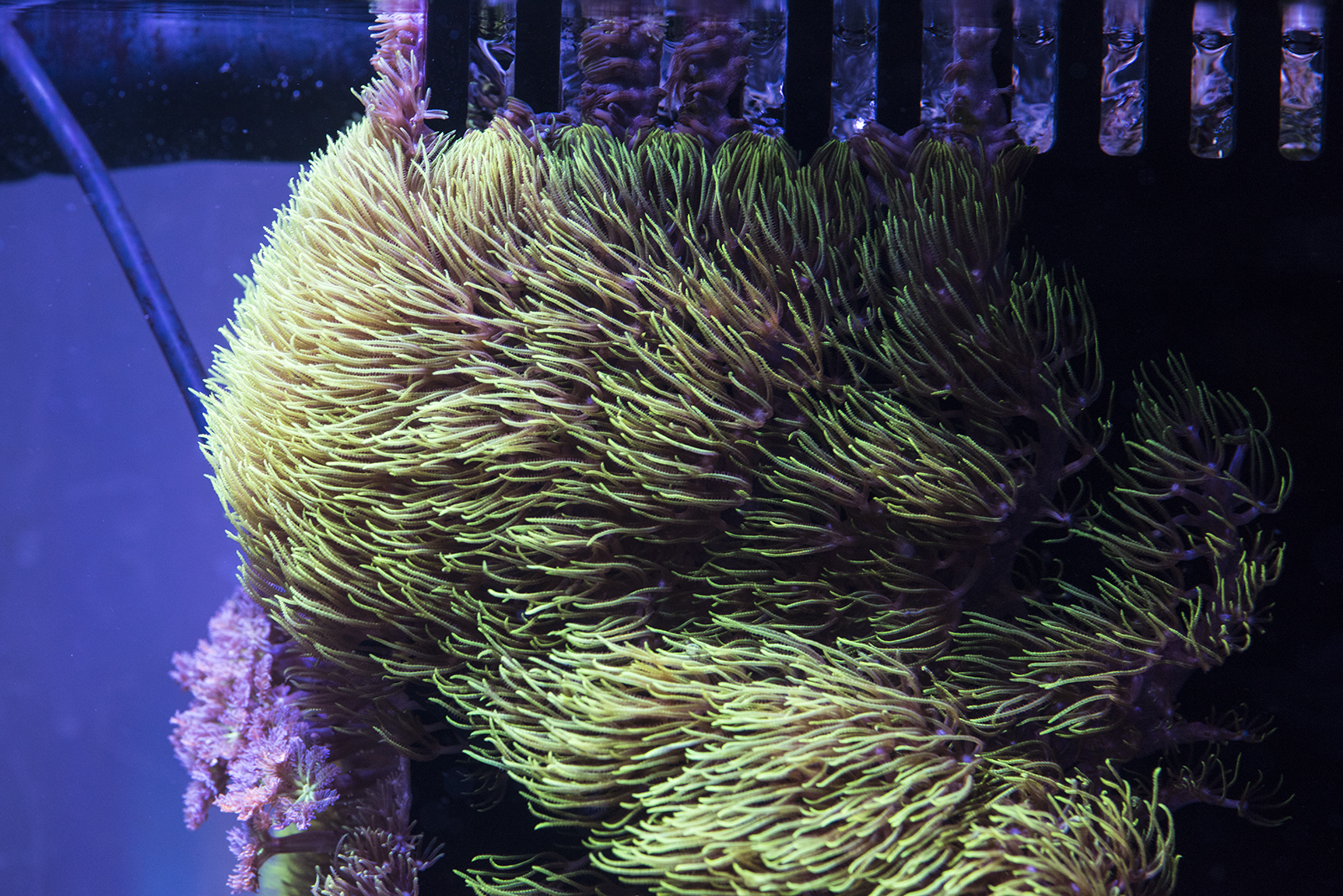 With that in mind, I would like to introduce you to the company whose products I am reviewing today. Reef Rax  is a new manufacturer based in Long Island, NY that makes magnetic frag racks for use in reef aquariums. Their frag rack system has several unique characteristics. First of all, Frag Rax holders are made out of completely reef safe, inert resin that won’t leach any chemicals to the tank. The plastic resin used in the build is very porous and very light, while being almost indestructible.

The second most noticeable aspect of Reef Rax is its live rock –like appearance. Each of the 4 “models” (more on them in next paragraph) is shaped to mimic real reef rock, both in structure and color. In fact, each frag rock is available in 5 different colors- from the standard white and black to the more live rock looking purple, brown and grey.

I received three models of Reef Rax to review, each in different color: the nano shelf in purple, nano corner shelf in brown and nano “s” in grey. They all come with pre-drilled holes- 9 in the nano shelf,  8 in the nano corner shelf and 10 in the nano “s”. What’s cool about the material they are made of is that nothing stops you from making your own custom holes. In fact, a power drill and regular wood cutting drill bit is all you need to modify Reef Rax. 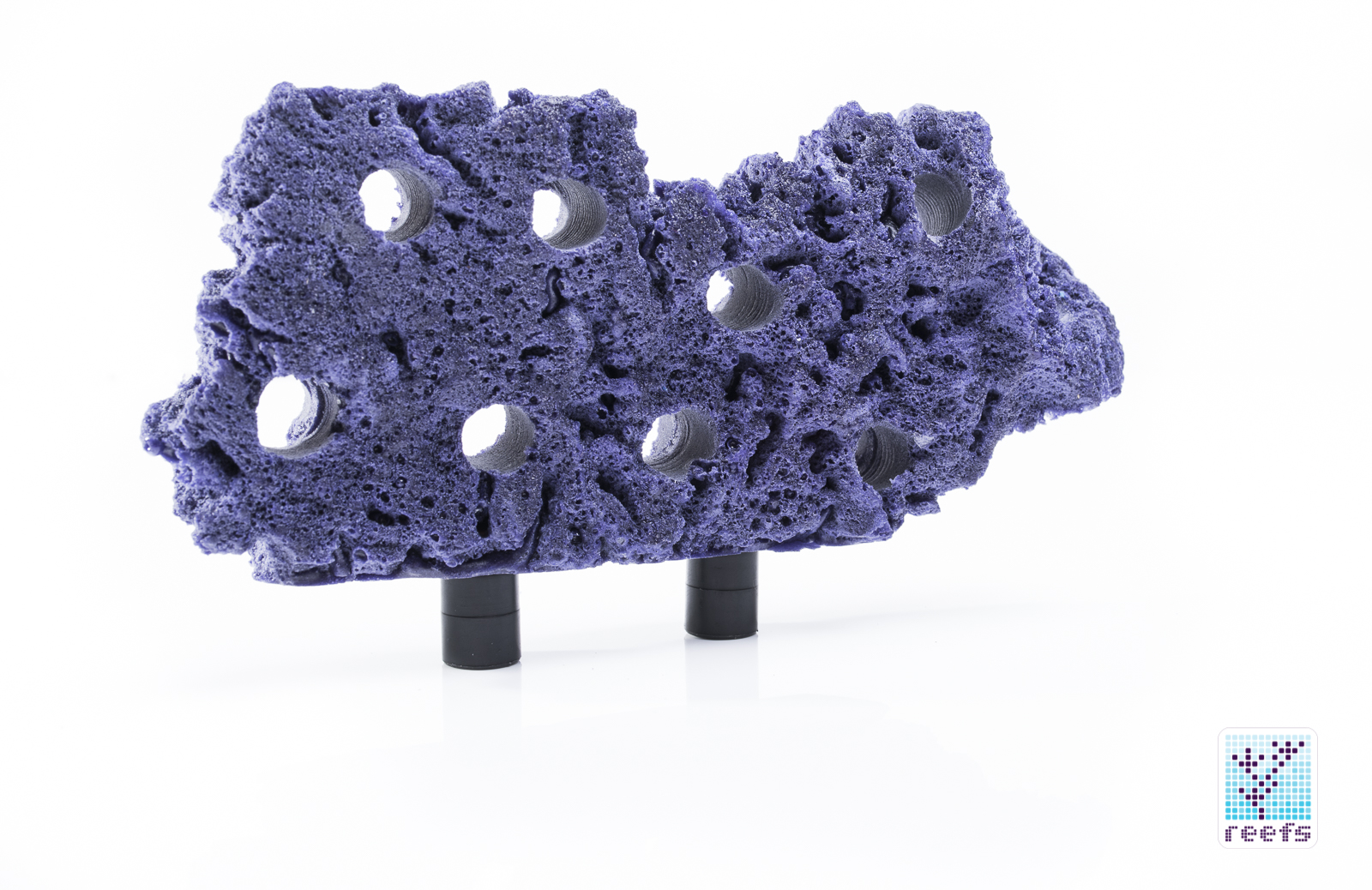 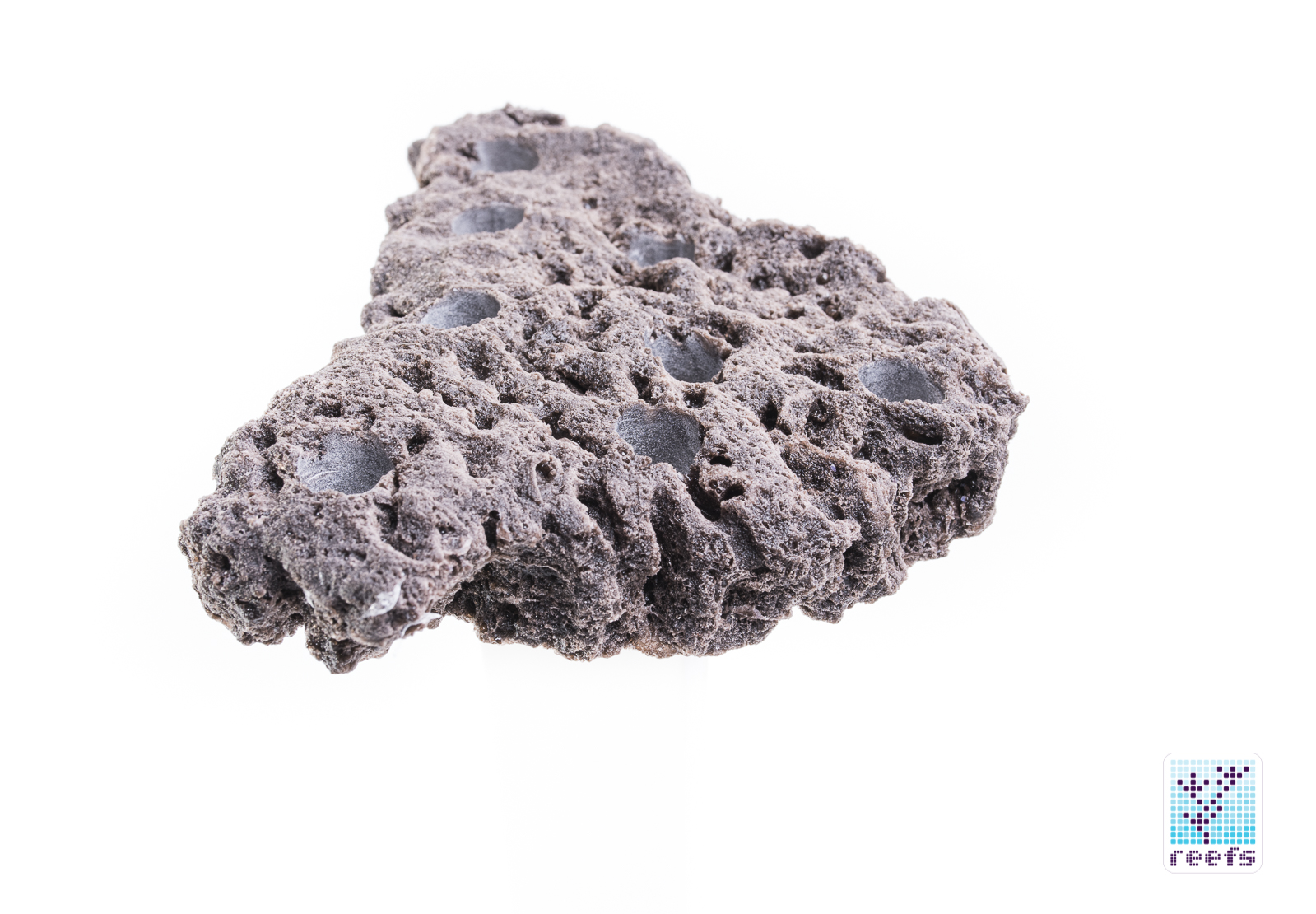 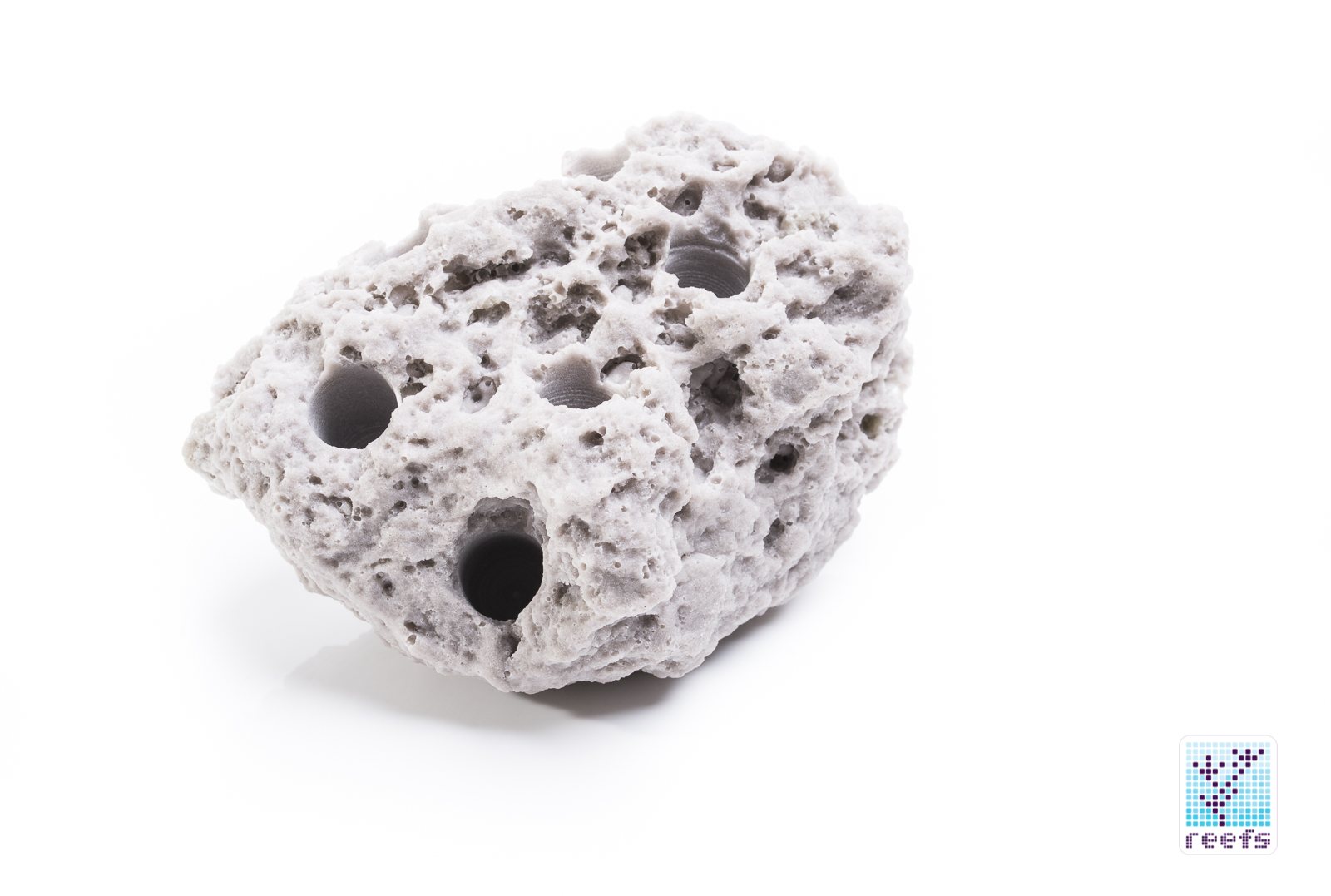 Reef Rax comes with two rubber coated, submersible magnets, one for each side of the flat-cut backside facing the glass. I would personally prefer one long case that connects the two outside magnets, just because I tend to stick the outside magnets together (they’re rare earth magnets, so go figure), but it’s not a big deal if you’re not planning to reposition the rack often. The nano series is meant to be used in glass up to ¼” thick, but I didn’t have a problem hanging it on my ½” glass panels while it held a full set of ceramic plugs; they just weren’t secure enough to withstand an accidental blow of a misplaced hand. I put it on the back panel where my hands rarely venture and didn’t have any problems. According to the manufacturer, ½” glass rated versions of the models are in the making and will be released soon. 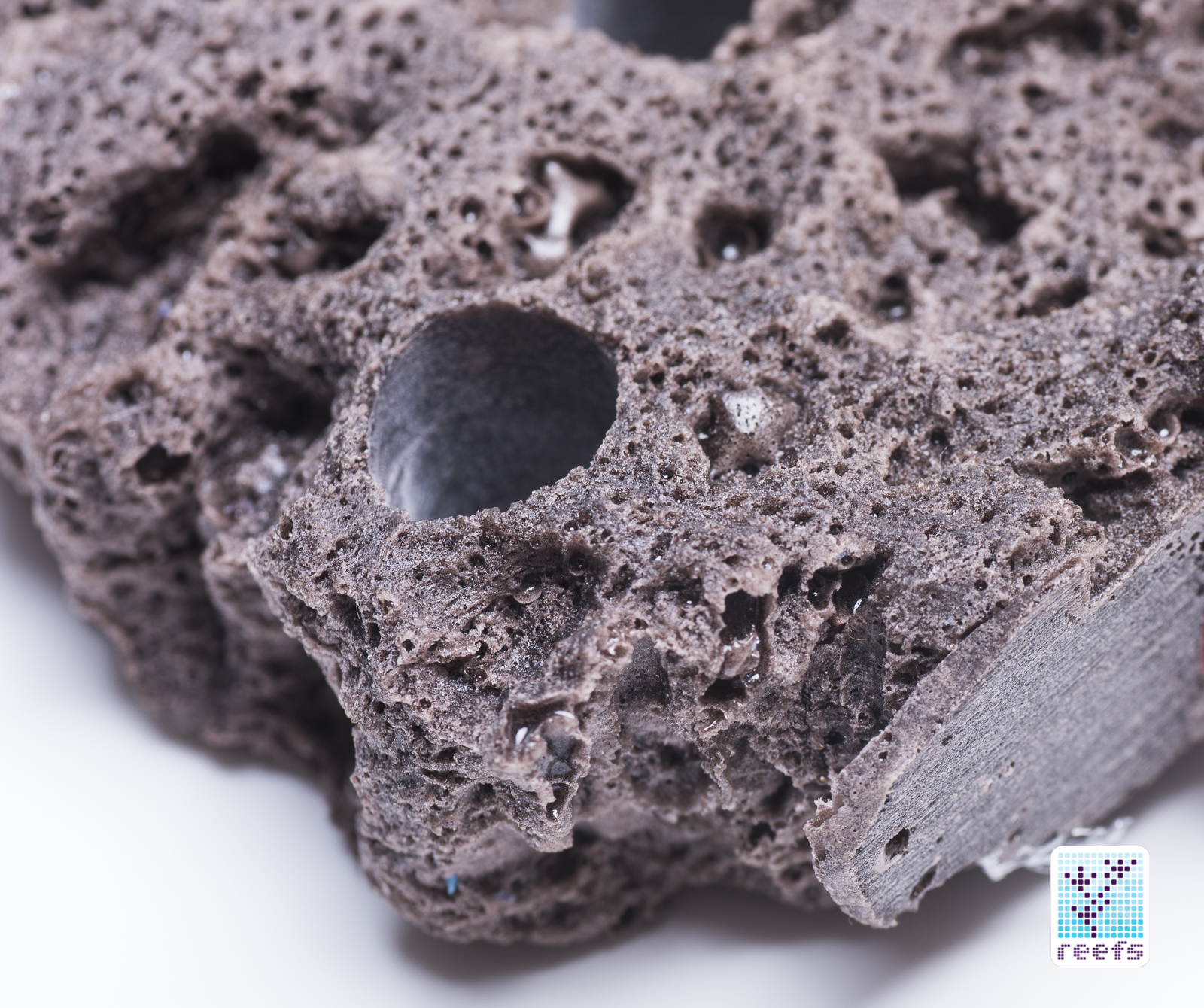 When you pick up a piece of Reef Rax for the first time, you’ll be surprised at how light it is. Pumice density is what comes to my mind as comparison. No wonder it can be held by a relatively small magnets. Color-wise, the grey is the most utilitarian of the three, it resembles a Tonga sourced dry rock. Brown looks the most natural, with different shades of that color nicely blend into one, uniform mass. Purple is the boldest and may be too bright for some, but it does look similar to a fully coralline covered natural rock. It’s important to note that Reef Rax appearance changes rather drastically after being underwater for some time. Let me explain… 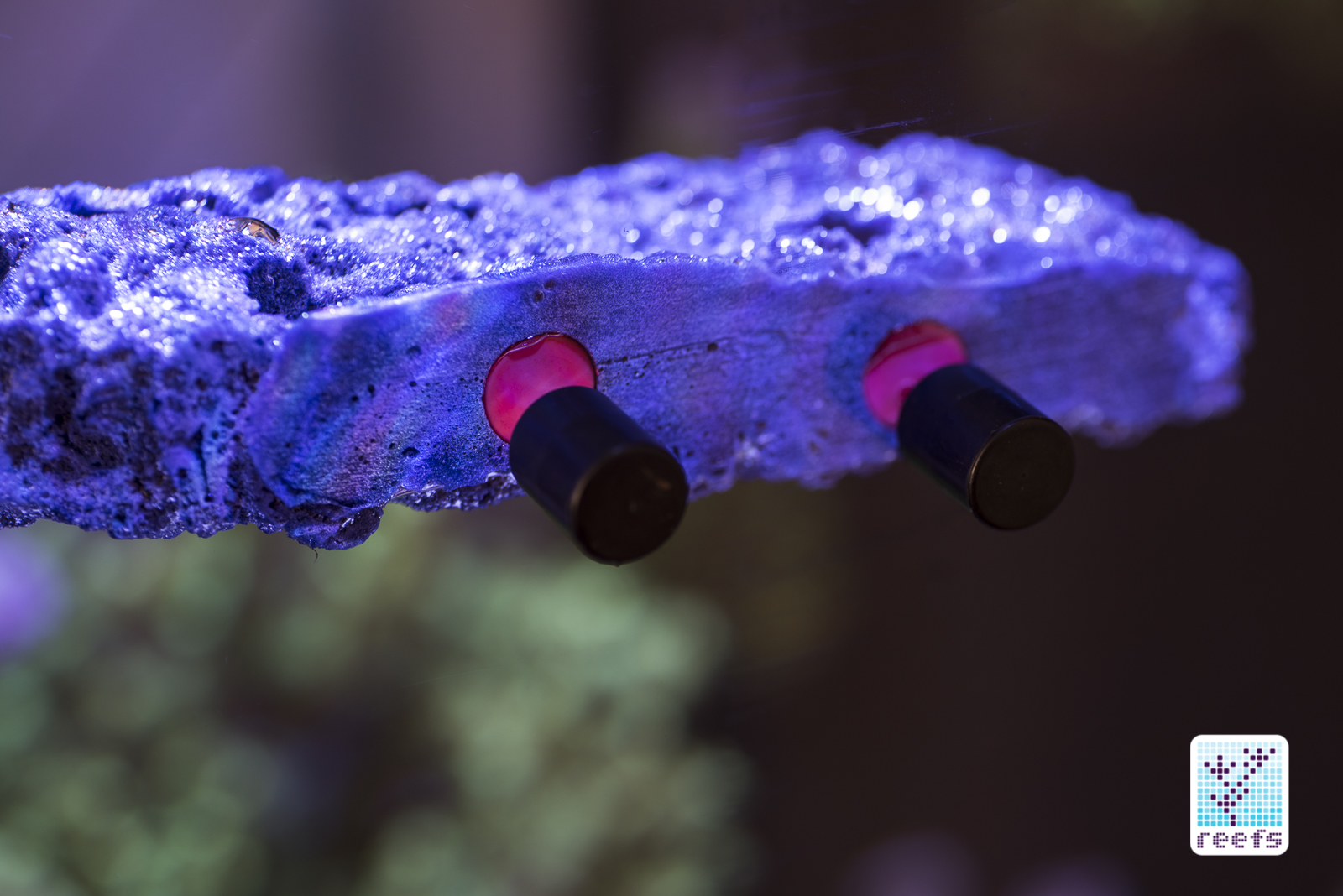 Purple Reef Rax rack on its first day in the tank 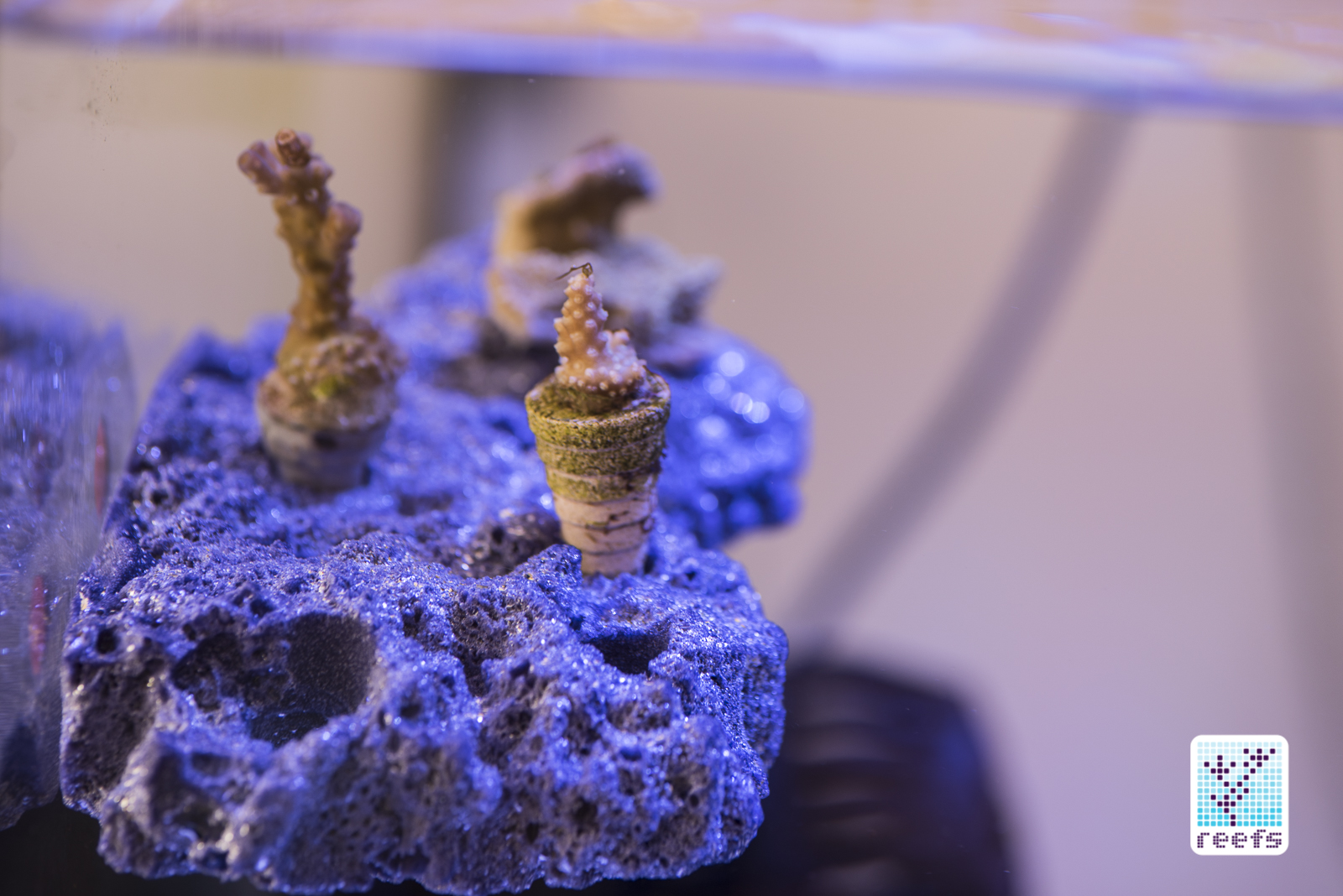 I mounted three Reef Rax racks on the back panel of my 100g reef tank almost 3 months ago and it has been a feature of my reef ever since, hosting a bunch of different frags and loose pieces of corals. The initial “feel” of the purple and grey versions of the rack, both visible from the front panel, was that they were noticeable. The brown in turn, blended in seamlessly with a man-made rock I’ve had in this aquarium for a year or so. Things started to change around the 2-week mark where the porous structure of Reef Rax started to get populated with all kinds of macroalgae and other microorganisms. The purple turned more subtle as the surface “aged” and the grey of nano “s” darkened to a much more natural tone. To clarify, it’s not that the Reef Rax started to change color, instead, enough stuff grew on it to changed its appearance, so even though the Reef Rax structure is made out of a plastic resin, it still functions perfectly as a surface for reef life to grow on. All the racks “aged” nicely within 3 months of being in my reef tank and now don’t overshadow the rest of the tank’s rocks… 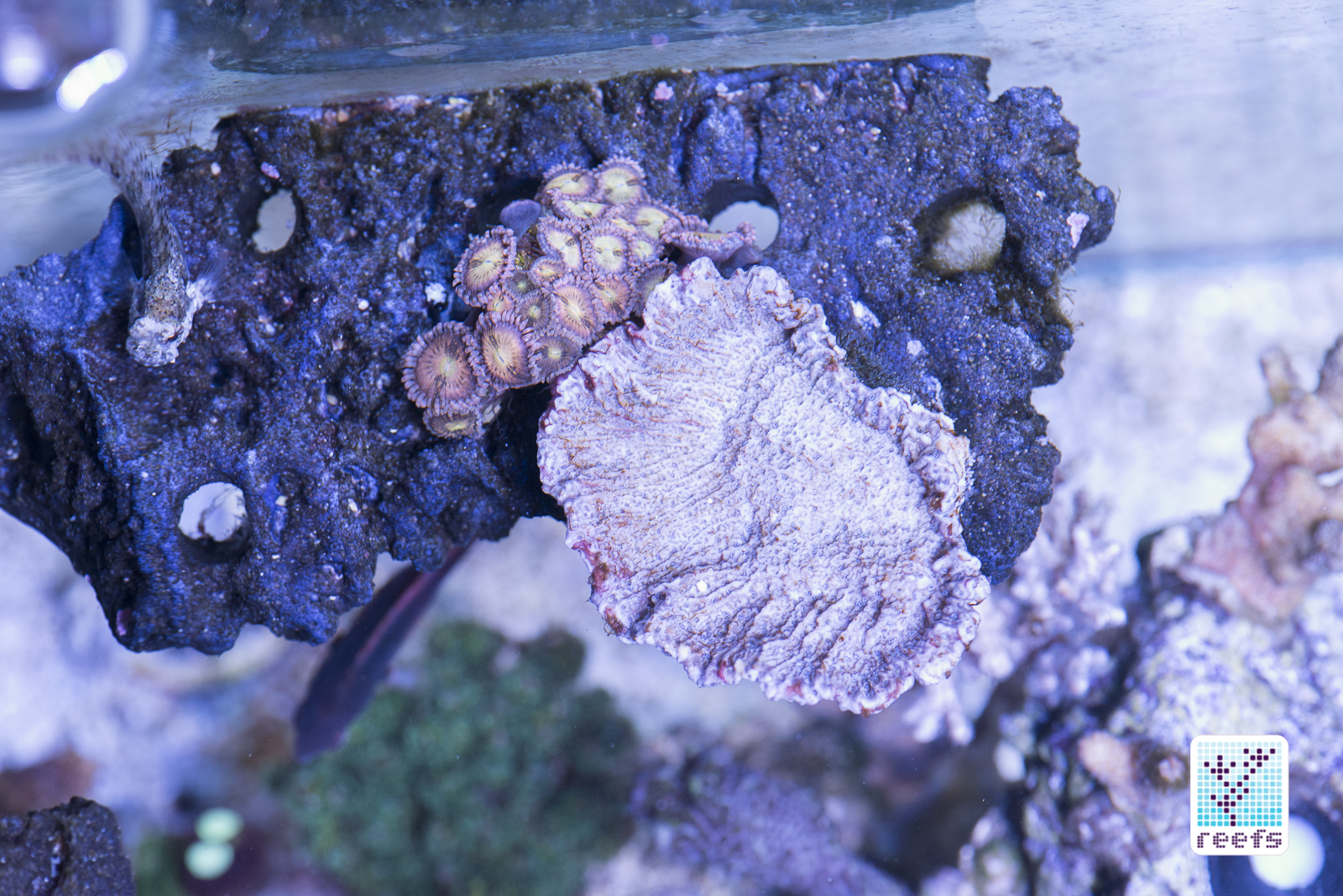 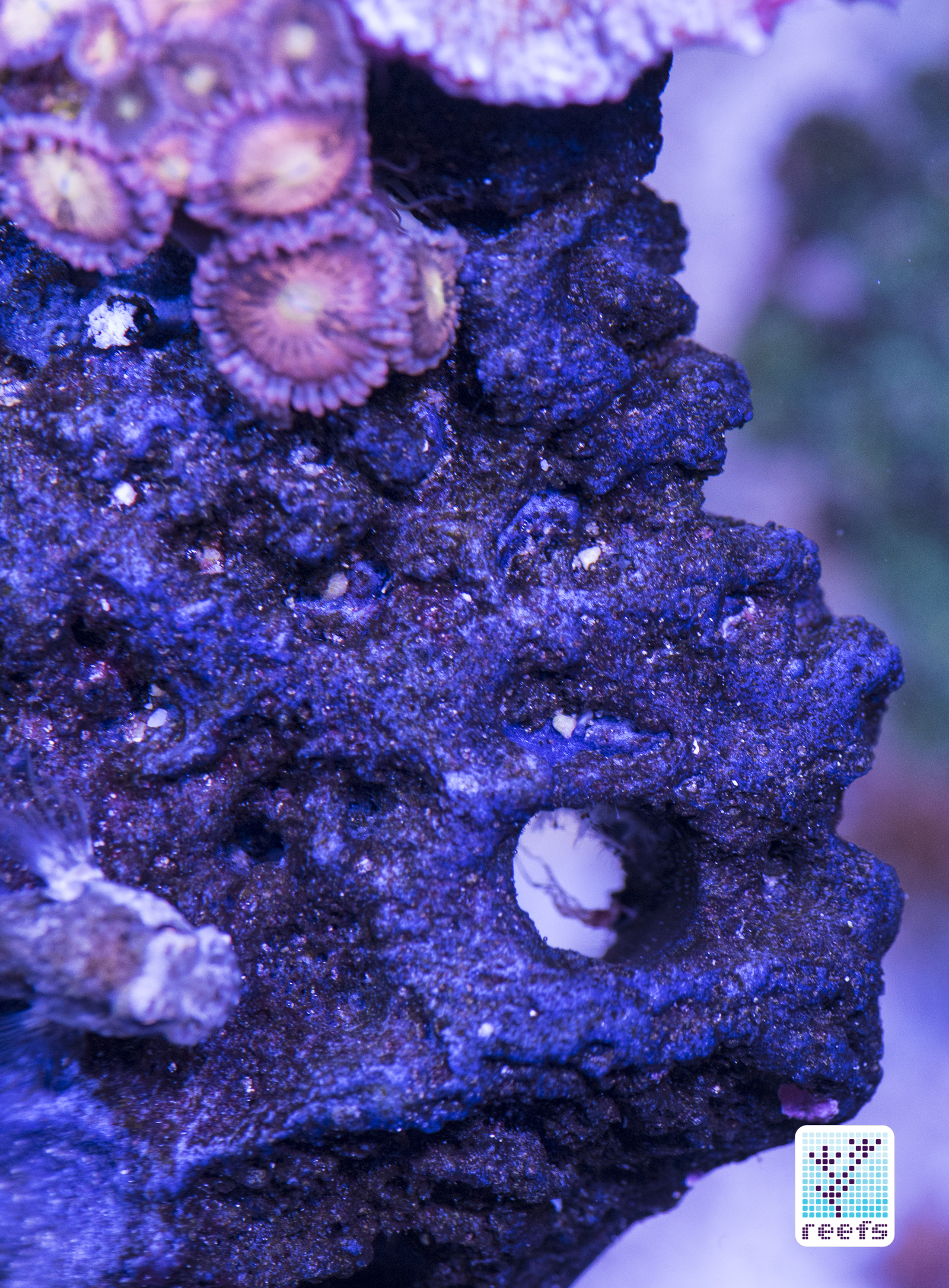 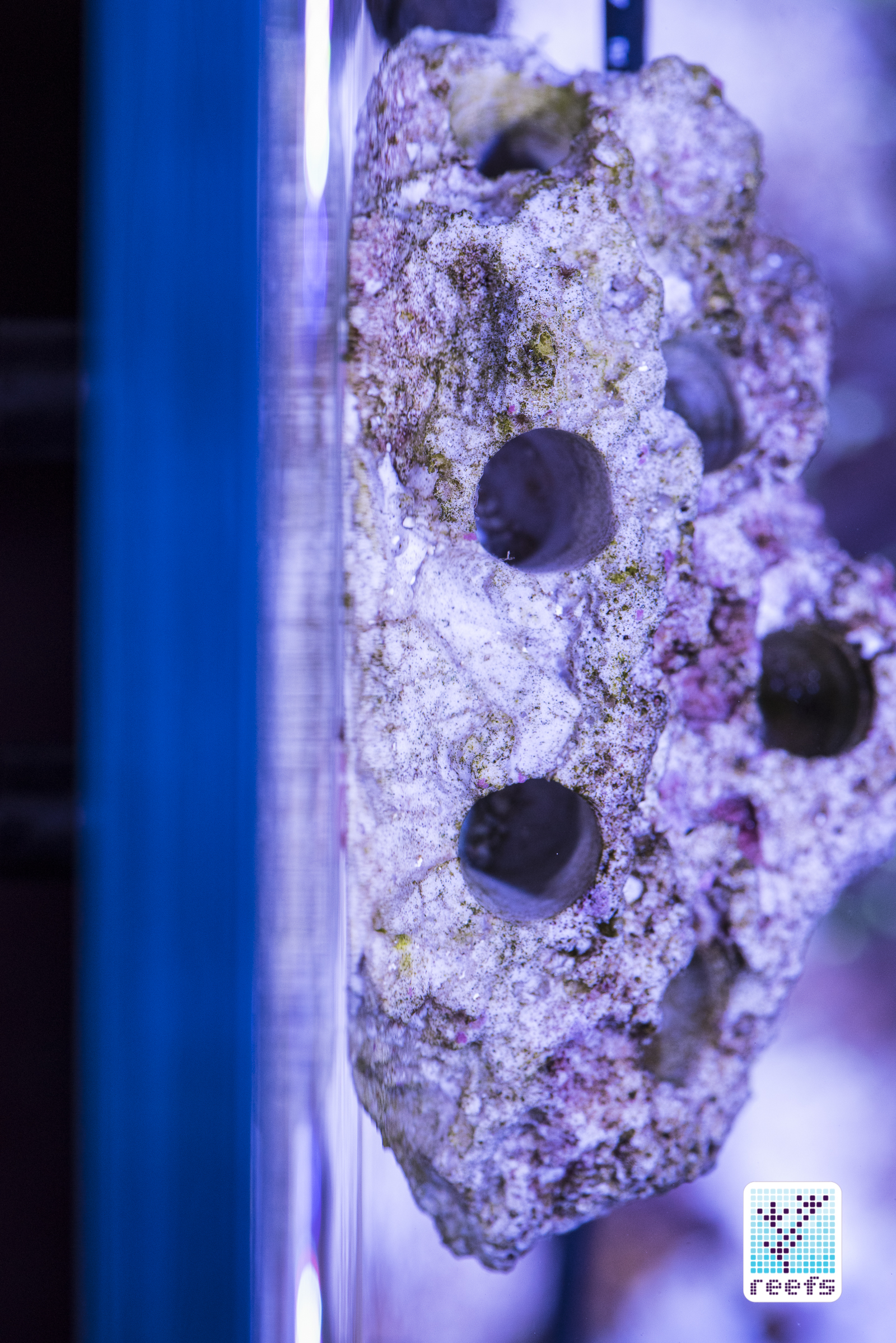 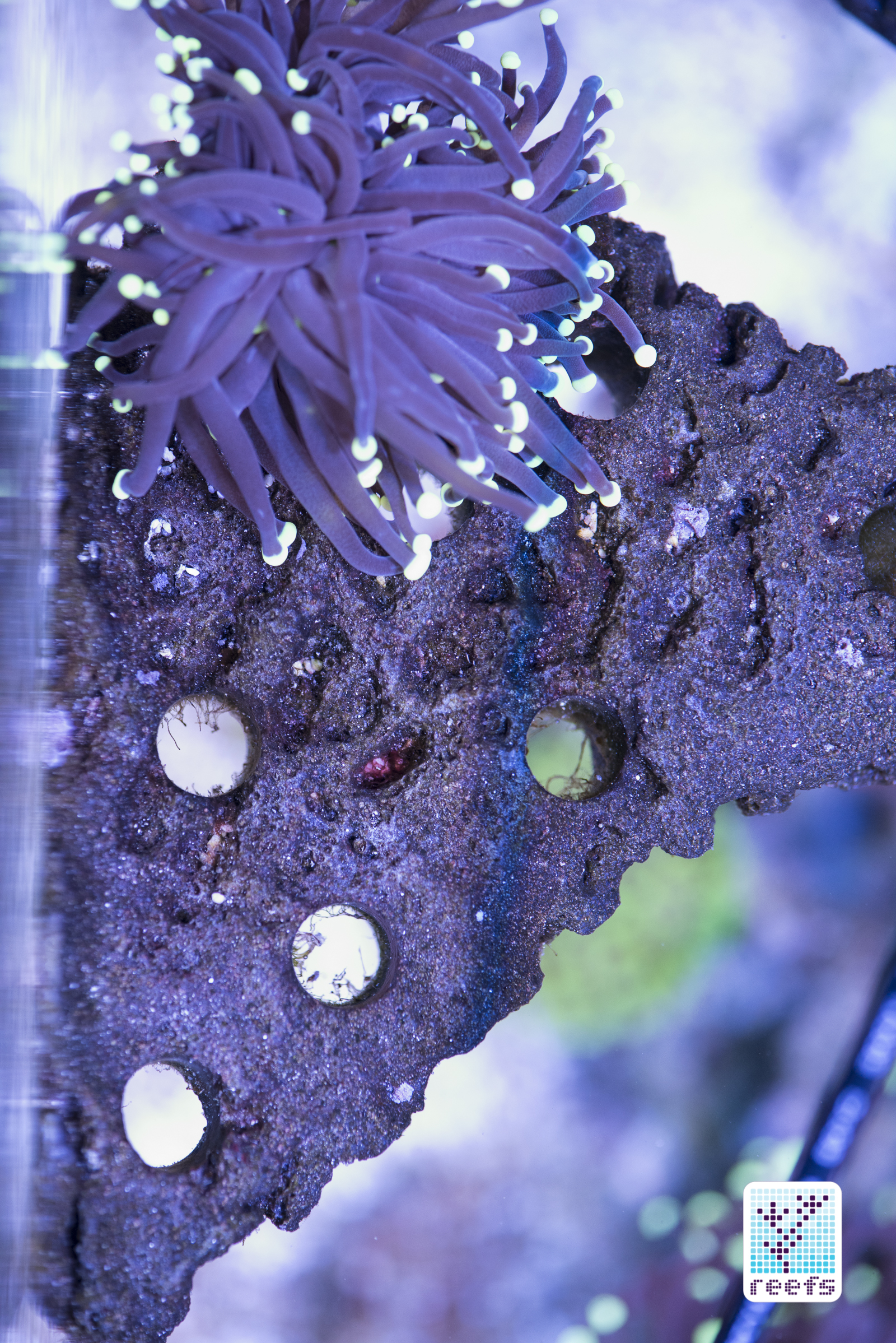 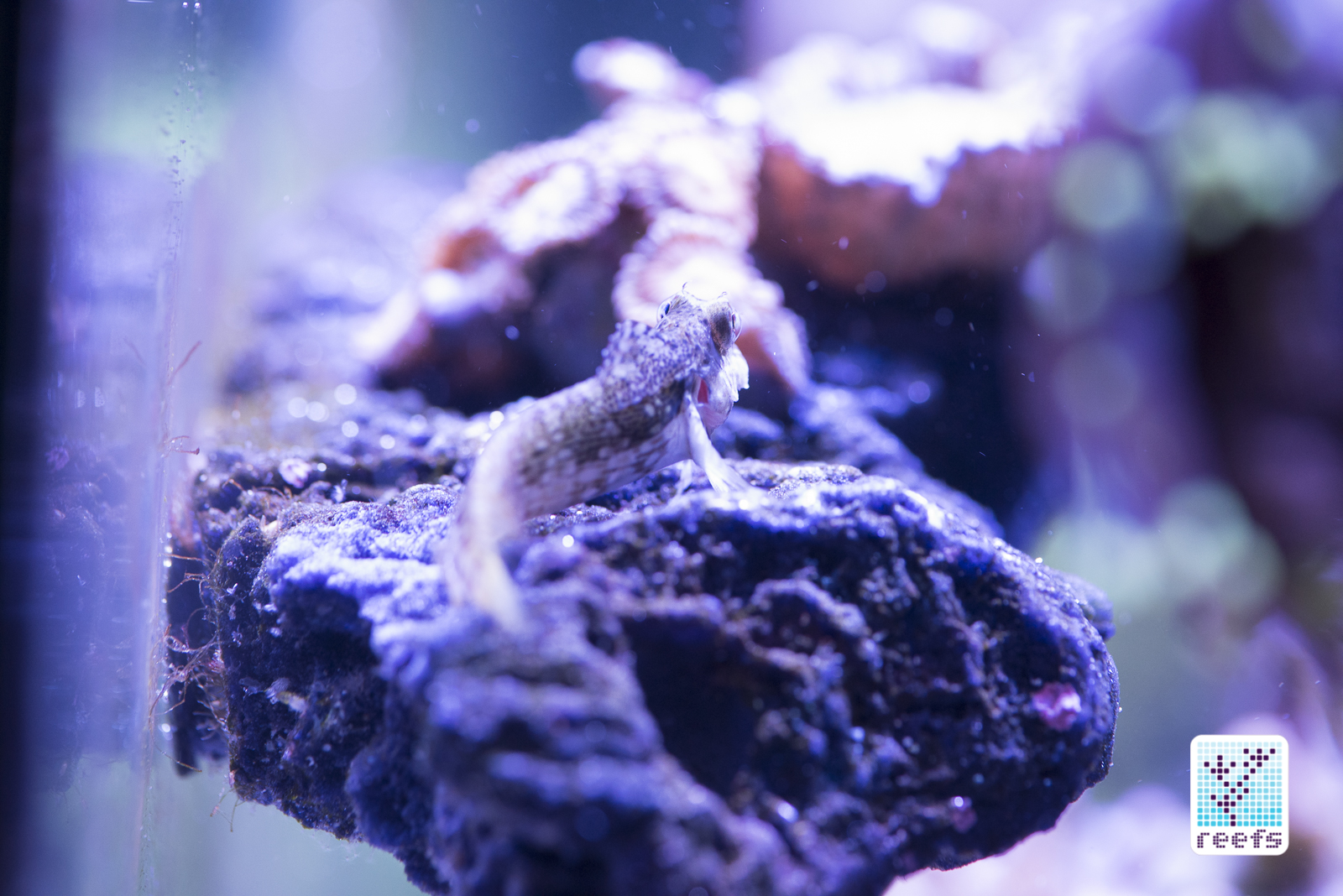 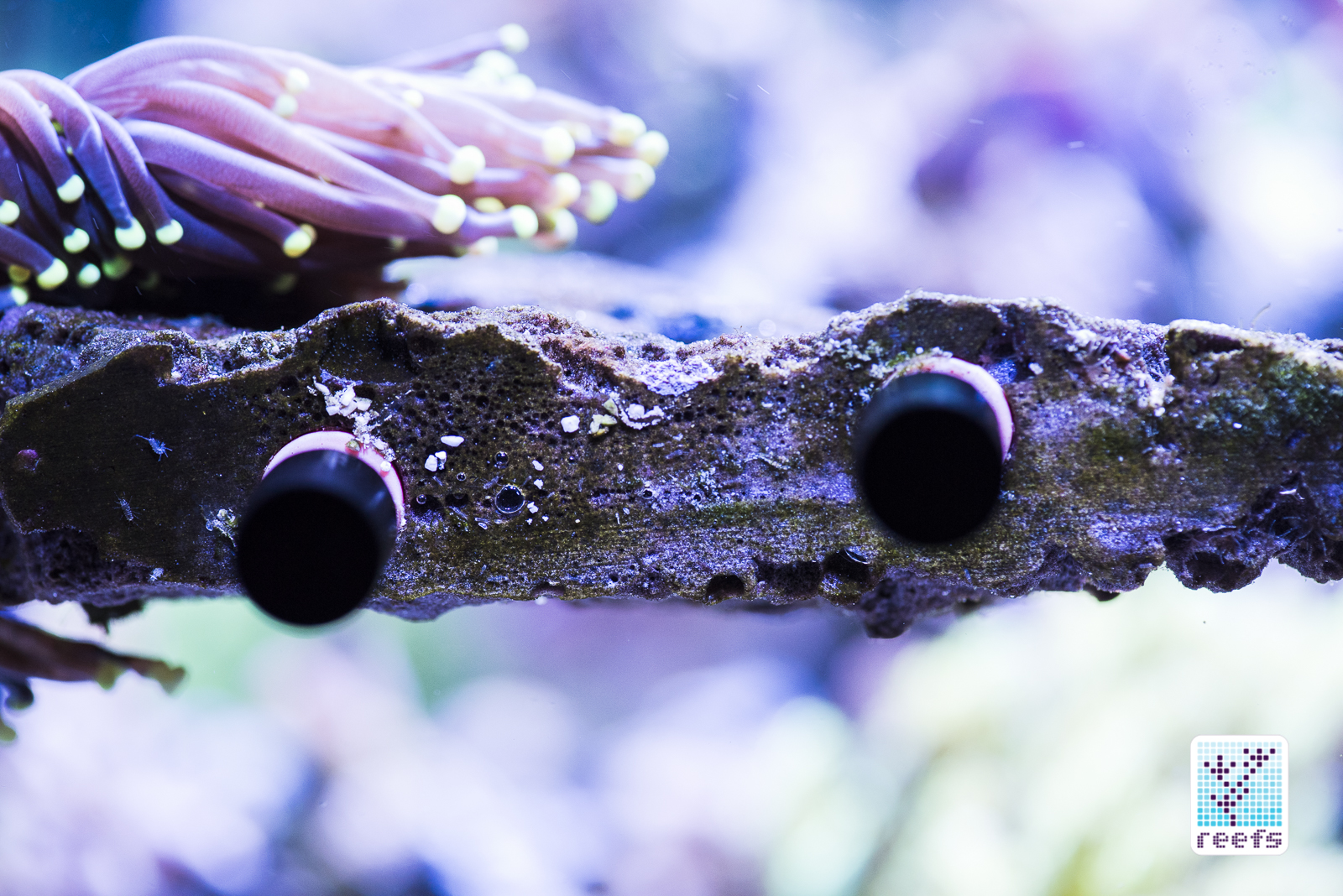 …and here’s where I find Reef Rax excels. I wanted to create additional areas for corals to grow by utilizing the back wall and at the same time not have something that screams “frag rack” in the display area of my tank, and for that, Reef Rax provided. It has an excellent porous surface that life quickly takes over, and it creates natural looking ledges that don’t distract from the main viewpoint. 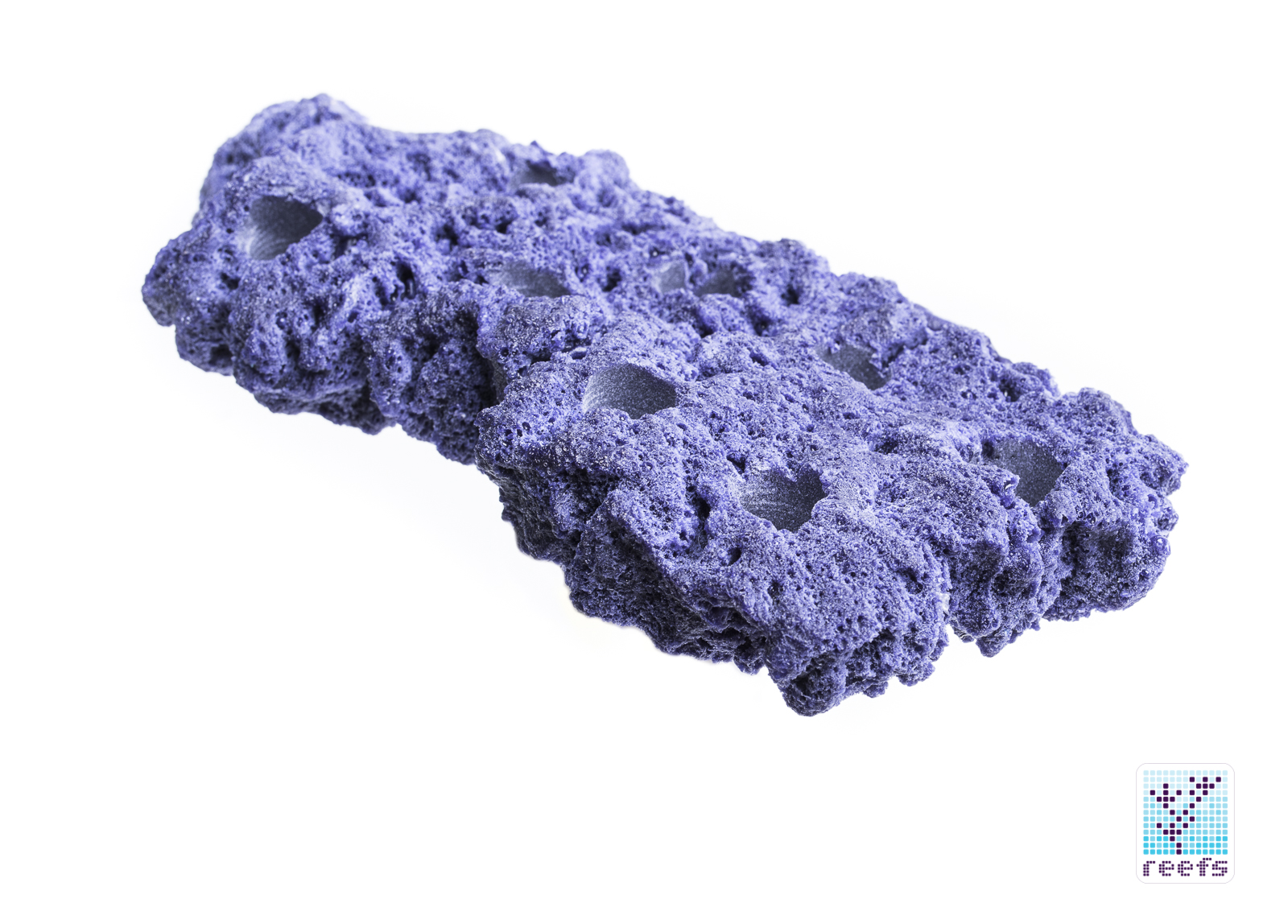 An argument against Reef Rax was made by someone reviewing the product in an online store that it is expensive, so I started researching. I’ve looked online for similar “live rock looking” magnetic frag racks and for one thing, there aren’t that many, and two, almost all are more expensive than Reef Rax. So yes, it is costlier, compared to regular “egg-crate” or acrylic frag racks, but it’s actually at the bottom of the price chart when it comes to “natural looking” frag racks. Plus, it’s made here in the US. If you need a frag rack or more space to grow corals but hate how regular magnetic frag racks look in the tank, Reef Rax may be the right choice for you. It looks good and fulfills its function with ease, plus it is so light that it’s safe to use in a bare bottom glass tank. What I like the most about Reef Rax is that when placed on the back wall and observed through the front, it adds to the “depth of field” any good aquascape aims for.

I have two comments regarding the design of Reef Rax, based on my experience with it- a single outside magnet mold would be preferable for me and the pre-drilled holes could be 1/8” of an inch in diameter larger- some of my various plugs don’t go fully in and stick out from the structure. I upsized some of them myself using a drill, but it’s something to consider. Other than that, it’s a fine frag rack.

Reef Rax nano series cost between $55-$70 and the full sized shelf rock is currently sold at $75. 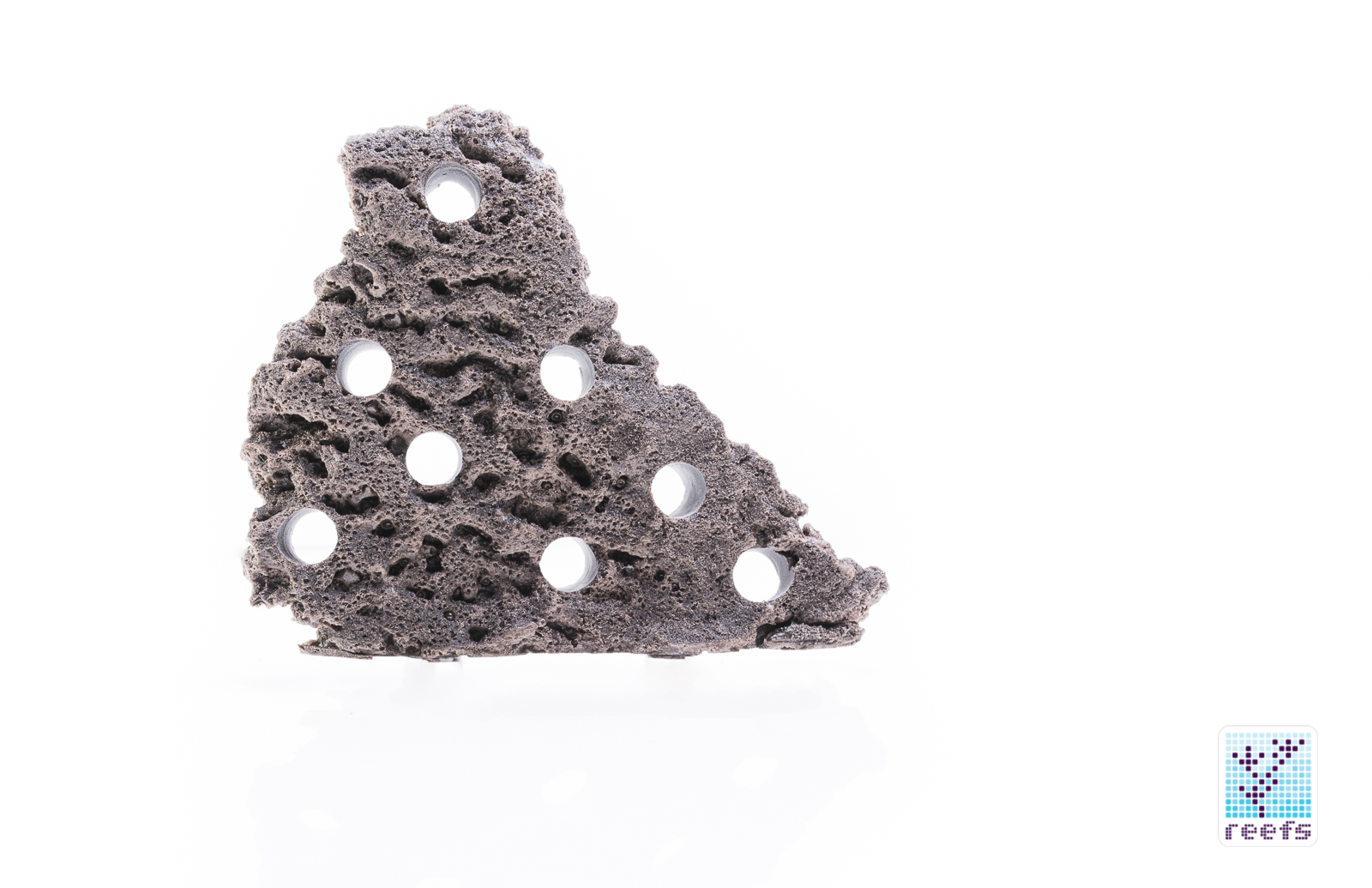 The upside down world of Apogon imberbis