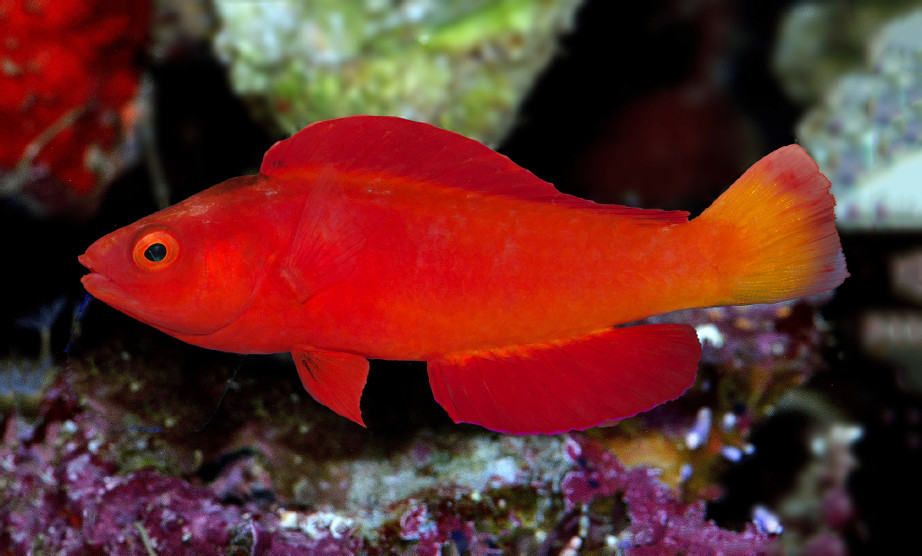 I’ll never forget the night when the first blurry images of a newly discovered Cirrhilabrus emerged. That was back in August 2016, and it only took a moment before I knew what I was looking at. The short pelvic fins, the bulky body, the unpatterned colors… someone had finally stumbled upon one of the missing members of the Cirrhilabrus lanceolatus group.

In the months since, this spectacular fish has become a semi-regular export out of the Northern Philippines thanks to the efforts of RVS Fishworld and their crew of expertly trained divers. Those initial specimens were discovered along the rubbled slopes of an undersea volcano called Didicas, at depths of 50-70 meters. This habitat is typical for members of the lanceolatus group, which generally make their living in the mesophotic realm.

The sanguine colors of this species are a bit misleading—in its dimly lit natural habitat, it would appear black as a moonless night. Much like the volcano from which it was collected, its fiery potential isn’t apparent at first. The fish became known as the Magma Fairy Wrasse, but, until now, it has lacked a proper scientific name. Finally, just over a year since it was first encountered on the slopes of a volcano, this extraordinary wrasse has been christened Cirrhilabrus shutmani.

The name honors Barnett Shutman, proprietor of RVS Fishworld, who helped get type specimens into the hands of fairy wrasse taxonomist par excellence, Yi-Kai Tea. Barnett and co. have been a mainstay on this website thanks to the amazing diversity of livestock they regularly bring in, which includes all manner of weird hybrids, aberrant and unusual specimens, and many noteworthy range extensions. But, even more important, Barnett has helped lead the way in changing the culture of how fish are collected in the Philippines, traveling all across this island nation to promote the benefits of net-collecting fish. It’s a great honor to have a species named after yourself, and I can think of few people in the aquarium trade more deserving!

There’s still much left to learn about this exciting new species. For instance, the largest known specimens are considerably smaller than most of its other relatives in the lanceolatus group, which can top out at nearly six inches in length. So what would a fully grown C. shutmani look like? Will it develop a lanceolate caudal fin? Will its colors change? And what relationship does this fish have with the enigmatic and still undescribed Ogasawara Fairy Wrasse? Might that be the terminal male of C. shutmani, or perhaps a hybrid of it, or might it really be another species waiting to be described. The ocean’s mysteries are slow to reveal themselves…

RVS FISHWORLD NET CAUGHT TRAINING PROGRAM FOR LIVE TROPICAL ORNAMENTAL FISH June 26 – July 1, 2017 at Lubang Island, Occidental Mindoro, Philippines For the divers of Cabra/Lubang Island, Sta. Cruz & Masinloc, Zambales Our goal is to give sustainable livelihood to the coastal community by educating them on how to collect live ornamental tropical fish in an environmentally-safe way through the proper use of nets.

Pseudanthias tequila, The Cave Anthias Finally Has A Name!