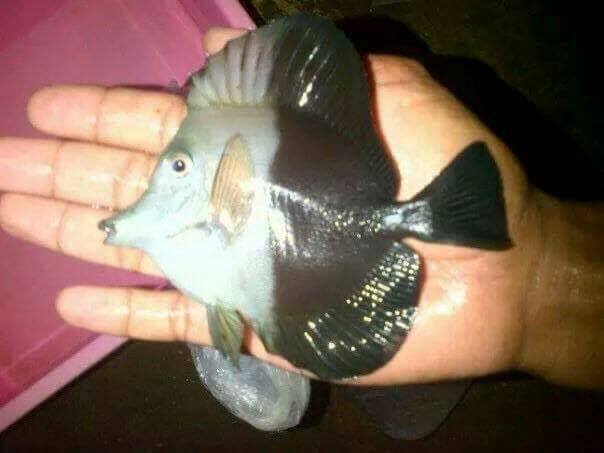 Aberrant Scopas Tangs are all the rage these days, and the specimen seen here is one of most interesting ones yet. Unlike the asymmetrical markings we typically find in “Koi Tangs”, this unusual individual has a perfectly bicolored appearance. It’s as if a black & white cookie somehow bred with Zebrasoma scopas…

Actually, hybridization (of the non-cookie sort) might be a reasonable explanation for why so many bizarre Scopas Tangs originate from the waters around the Java Sea and Bali—this bicolored specimen comes courtesy of the Bali-based exporter Endang Nilasari. The reefs in this region form one of the major biogeographic “suture zones” of the Indo-Pacific, allowing fishes from the Indian and Pacific Oceans to intermix.

We tend to focus our attention on the many interspecies hybrids documented here, as their phenotypic idiosyncrasies make them stand out, but a less-studied phenomenon is the potential for intraspecies hybrids to be created. These would normally only be detectable genetically, but perhaps these weird Scopas Tangs are an exception to the rule. Remember, “species” are inherently messy, ill-defined concepts, and an Indian Ocean Scopas Tang is not necessarily the same thing as a Pacific Ocean Scopas Tang.

Angels in reef tanks? Yes – but be selective

Diving into the World of Ozone