By assimiliating with local fish, immigrant fish increase their survival 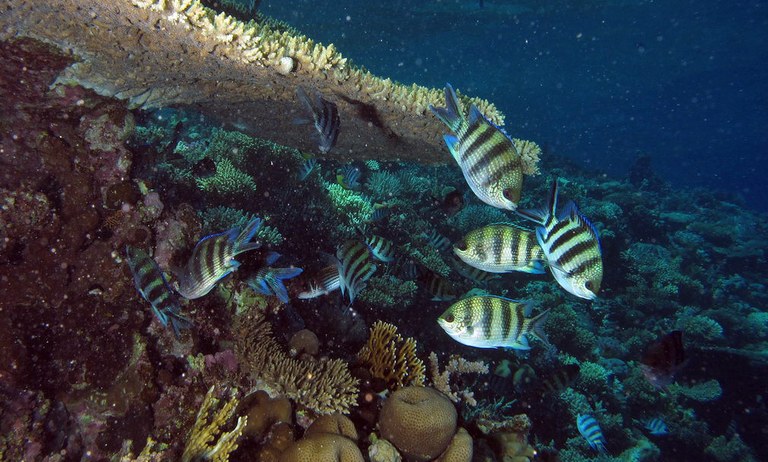 
Hanging with the locals pays off for tropical invaders

Studying the behaviour of tropical fish in a temperate environment can help predict who might be winners and losers in a warmer future, and how resources such as fish stocks may be impacted, researchers say.

Scientists examined the shoaling strategy of the Indo-Pacific sergeant damselfish, a common species of tropical fish larvae regularly transported to temperate waters off the south-east Australian coast, and found they may be choosing new “friends” in order to survive.

Juvenile tropical reef fishes have been observed there since 1935. In recent years, however, both numbers and survival rates through the temperate winter season have increased, most notably around the rocky reef shores of Sydney.

The research, led by the University of Technology Sydney (UTS), provides some of the first information about how individuals’ behaviour at the frontline of an “invasion”, or range expansion, might influence the success of that expansion.

The study, published in Global Change Biology, gives insight into the potential impacts the shoaling behaviour of tropical “invaders” might have on native fish communities in warming temperate waters.

“The damselfish juveniles either form shoals made up of their own species, ‘tropical shoals’, or they form ‘mixed shoals’ with other similar size and shape species such as the Australian mado,” lead investigator Shannen Smith says.

“By the end of the recruitment season in July individual damselfish in the mixed shoals had larger body sizes than those in the tropical shoals.”

“It’s likely this is an important benefit for invading tropical fishes – body size is typically associated with survival,” she says.

Although this outcome seems counter-intuitive, the researchers say it is likely a social learning effect; the mixed shoals showed greater social cohesion, the benefits of the social interactions outweighed the costs of being the odd ones out.

“The mixed shoals maintained their cohesion as the season progressed whereas the tropical shoals continued to defend their territory even as their numbers declined. Not only is this costly in an energy sense but it also means there is more distance between individuals and predators can pick you off,” Smith says.

“In a world where the climate is altering, understanding the dynamics of organisms’ range shifts is important for species conservation and resource management, for both the shifting species and receiving ecosystems,” they say.

“While scientists have done a lot of work documenting the occurrence of range shifts and whether the movement is tracking the thermal environment, we currently have limited understanding of the influence of behavioural ecology on range shifts,” says co-author Dr. Jenni Donelson, from the ARC Centre of Excellence for Coral Reef Studies at James Cook University. “This research shows that individual behaviour may play a larger role in range shifts than currently understood.”

The Mocha Storm is the Latest Release from Sea & Reef