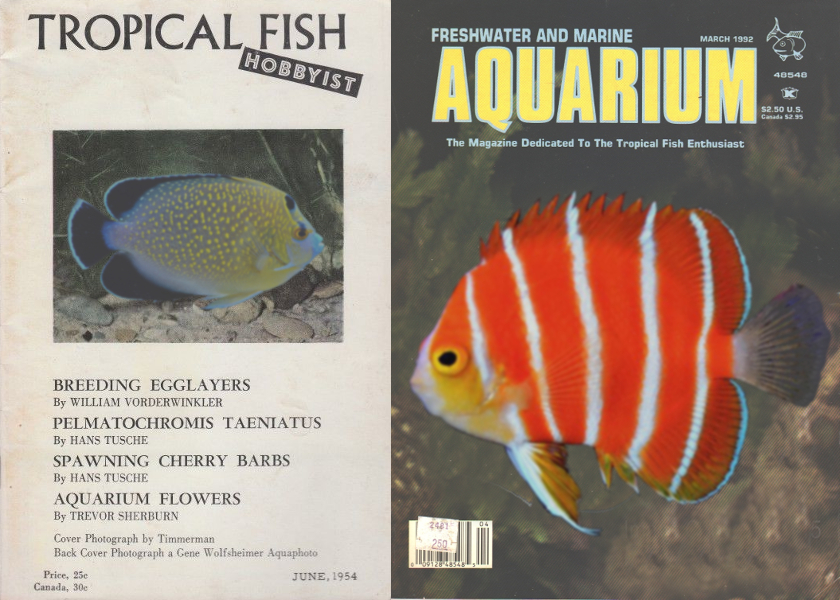 Tropical Fish Hobbyist (TFH) and the recently defunct Freshwater and Marine Aquarium (FAMA) were the leading aquarium publications during the latter half of the twentieth century, and, throughout their rich history, a surprising number of species descriptions appeared within their pages. Today, this sort of taxonomic research is largely restricted to peer-reviewed scientific journals—Zootaxa, Zookeys, & JOSF are some of the most prominent contemporary examples—but for much of the 20th century it was common practice to publish in the “popular press”.

Publishing in these periodicals, versus in a scientific journal like Copeia, was often a practical matter of cost and time. Printing color photographs alongside a description might cost hundreds or thousands of dollars in a journal, whereas an aquarium magazine would have borne this cost with their advertising revenue. Turnaround time from submission to publication was also likely to be far quicker than the laborious process of peer review. Not to mention the simple fact that an aquarium magazine was likely to reach far more readers when compared to the small academic readership of traditional journals. And so this drew a wide range of authors, from well-known professional taxonomists to amateurs and aquarists.

The vast majority of the scientific names published in this manner were for freshwater fishes, particularly in the earlier decades when the marine aquarium hobby was still in its infancy. One of the first taxa to appear was the Cardinal Tetra (Paracheirodon axelrodi) in a 1956 issue of TFH, with dozens more well-known species following in the ensuing years. But of the magazines listed above, only TFH and FAMA ever published descriptions for marine species, and, since many of these were originally sourced through the aquarium trade, they are often quite familiar to us now. Common reef fishes like the Bicolor Dottyback and Flameback Angelfish saw the light of day here, as did some of the deepwater holy grails, like the Peppermint Angelfish and Lunula Triggerfish.

The list of authors involved reads like a who’s who of 20th-century ichthyologists: John Randall, Gerry Allen, Richard Pyle, Victor Springer, among others. But by far the most prolific was Warren Burgess, who published extensively in TFH’s magazine and books in the 1970’s and 1980’s, up until the description of the butterflyfish Prognathodes brasiliensis in 2001, the last marine species which would be described in the magazine.

Now, aside from the interesting historical footnote here, there is a very practical reason why I have chosen to discuss this topic. For the taxonomists who study these fishes, it can be a considerable challenge to track down the relevant articles. This problem is especially acute when it comes to FAMA, as digitized copies are almost entirely unavailable. There is a strong need for these to be shared onto a public database like the Biodiversity Heritage Library, but this will ultimately require the cooperation of the current holder of this magazine’s copyright, Lumina Media.

The same is true for those species which appeared in TFH. When it comes to taxonomic research published decades ago, there should be no argument against the open dissemination of this information with the general public. This sort of “open access” is increasingly seen as the new standard in science, and this holds doubly true for something as vital as taxonomy. And this is where you, dear reader, may be able to help. Central Garden & Pet Corporation, owners of TFH Publishing, Inc, and Lumina Media are stewards of an important zoological legacy, and it’s up to them whether they wish to share this freely with the public. No doubt these large, faceless organizations are mostly unaware of this issue, so it becomes incumbent upon those of us who care to bring it to their attention. Consider writing them, perhaps with a link to this article, to express your concern.