Forecasting the fate of corals 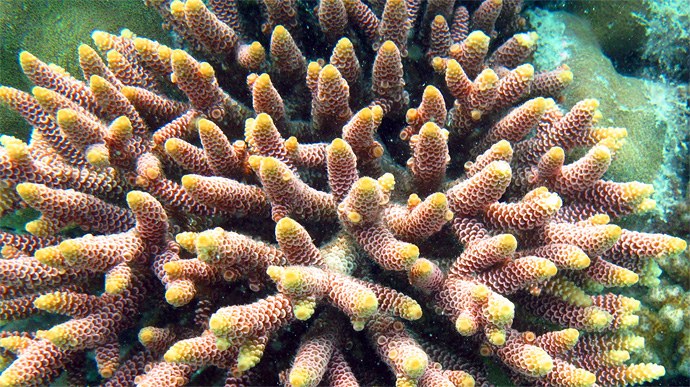 With a recent alarming report that as much as half of the corals on Australia’s Great Barrier Reef has died since 2016 after having suffered consecutive years of heat waves and mass coral bleaching events (the first time sequential bleaching events have ever been recorded), the publication of this new study could not be more relevant.

Scientists employed population genomics, biophysical modeling, and evolutionary simulations to predict future adaptation of the common coral Acropora millepora on the Great Barrier Reef.  They found that thanks in large part to how common this species is, its genetically diversity is key to adaptation.   Their calculations conclude that A.millepora have enough genetic variation to allow populations to gradual warming over the next 20–50 coral generations (100–250 years) before facing extinction.

Sadly, less common corals are not expected to fare as well.

While the PLOS report below suggest that this new study “is a rare optimistic contribution to our understanding of how a species can adapt to changing climate conditions,” the reality is 100-250 years is a blink of an eye in geologic time.  In our grandchildren’s lifetime, Acropora millepora … and most coral species, may become extinct.

A common Great Barrier Reef coral species has enough genetic diversity to survive at least 100 years before succumbing to global warming predicts Mikhail Matz of the University of Texas at Austin and colleagues. They report these findings in a new study published April 19th, 2018 in PLOS Genetics.

A warming climate, ocean acidification and destruction of coral habitats have all taken a significant toll on coral populations along the Great Barrier Reef. Previous studies offered hope that corals can adapt to warming conditions but no one knows if they can outpace climate change. Matz and his colleagues developed a model to estimate the ability of the common coral species Acropora millepora to evolve by redistributing existing heat-tolerance genes, taking into account the coral’s present-day genetic diversity and how far its larvae migrate before settling down. The model predicts that the coral will become more sensitive to temperature swings, which will cause occasional die-offs, but that coral populations will successfully adapt to temperatures along the Great Barrier Reef and survive at least another century. Whether corals will be able to adapt any further is uncertain and depends on several currently unknown parameters of coral genetics.

This study of a common inhabitant of the Great Barrier Reef is a rare optimistic contribution to our understanding of how a species can adapt to changing climate conditions. The findings show that recent catastrophic coral bleaching events do not necessary signal imminent coral demise and can also inform reef management strategies, suggesting that interventions that help reshuffle coral genetic diversity among reefs will likely increase the coral’s odds for survival in the near future.