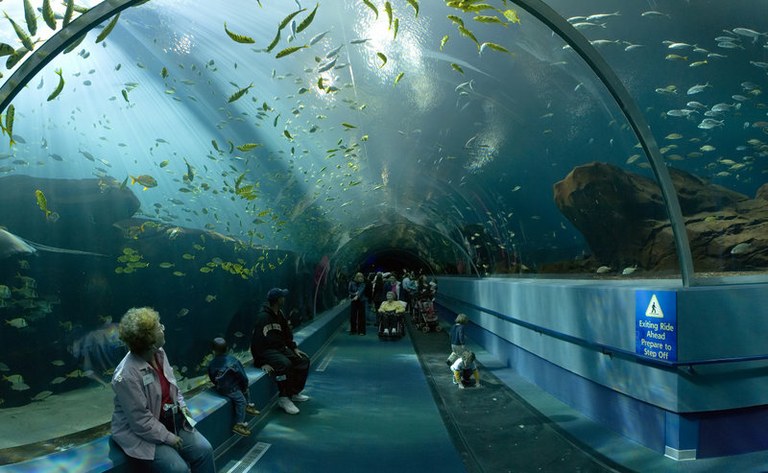 Georgia Aquarium’s massive Ocean Voyager exhibit – as big as it is – is still an aquarium.


While the Ocean Voyager exhibit is absolutely massive (6.3 million system gallons to house whale sharks, et al.), it is still fundamentally a captive aquarium – and a completely closed system at that.  According to Georgia Aquarium, they do not change any water for this exhibit as a matter of maintenance.  Since the parameters of the exhibit are carefully controlled and there are few external variables affecting the system, scientists hypothesized that the microbe populations should also be relatively stable, achieving a sort of equilibrium over time.

Over the course of 14 months, scientists analyzed the water of this exhibit to understand its microbiome.  To their surprise, they found that the microbes within the exhibit were both highly diverse and highly dynamic.  Different species of microbes would constantly and sometimes dramatically bloom and wane in response to seemingly tiny water condition changes that were below the researchers’ detection limits.

The researchers note a major caveat to their findings: The Ocean Voyager exhibit is sterilized using ozone treatment.  Water treatment methods such as ozone and UV may make microbe populations more susceptible to compositional changes associated with population bottleneck.  Aquariums that did not employ aggressive methods to kill pelagic microbes may be more stable.

An additional study of a smaller system at Shedd Aquarium (Chicago) analyzing the microbiome of aquariums after water changes “showed that water column microbiome diversity and evenness increased and stability decreased after a 90% water change in a 1,600 gallon salt water habitat. This study provided evidence for rapid turnover of microbial taxa following water changes in aquariums.”  To no one’s surprise, microbial communities are more dynamic after water changes because the conditions are greatly and rapidly altered.

With modern technology, we are now better able to understand how bacterial behave in aquariums.  This study is the first step to what may become an important tool to create better captive aquatic ecosystems.  Georgia Aquarium’s statement says it best:

“Knowing which beneficial bacteria live in the filters, and how they clean the water is a key to keeping the bigger animals in tip-top shape and the water blue and clear so guests can enjoy them,” said Dr. Alistair Dove,[co-author, vice president, research and conservation, Georgia Aquarium.]. “It’s all part of the grand incremental march of science towards a better understanding of the world around us.”

With high tech DNA methods that expand the field of microbial study, both the university and the aquarium see this study as one of many collaborations in the future that will ask and answer important questions that will help the aquarium make data driven decisions to further their care and conservation of aquatic species.

The study is published in the journal Applied and Environmental Microbiology.