Interzoo 2018: the First Time for Askoll and its Aquariums 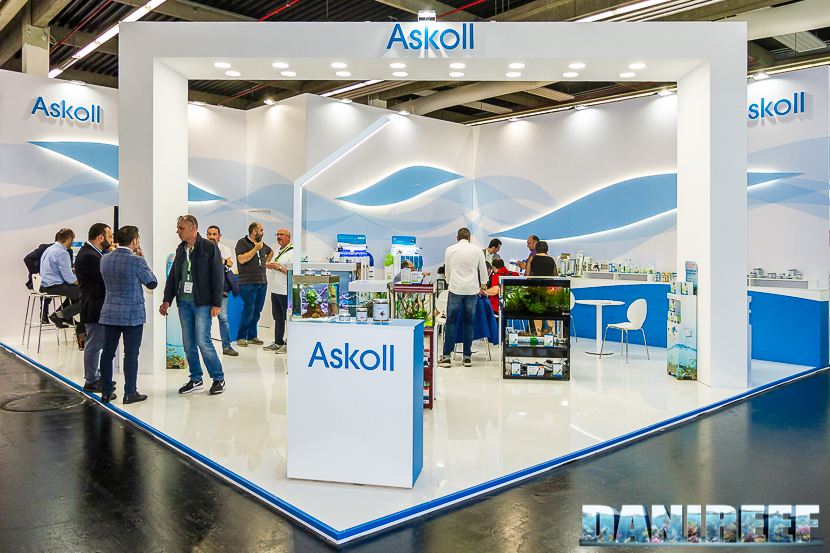 We can finally say it: even Askoll participated at the most important aquarium fair in the world and we’re very happy!

I had opportunity to share, in my article about the marine aquarium Pure Marine XL HC LED (italian review but the english translation will come as soon as possible), that I began my aquaristic life with an Askoll aquarium. So I never understood the absence of this Italian colossus at this exhibition.

But today, thanks to the interest of Andrea Monti, it seems that something is going to change in the company of Vicenza and we’re here to tell you.

The booth was as we like, lit, wide, and not with a profusion of products. There were beautiful aquariums displayed and they were wonderfully set by the friends of ITAU, in particular the fresh water aquariums. The booth was designed to represent a portal that invited the costumers to enter in the Askoll world. A metaphor we liked very much. Well done.

Practically, Askoll, that doesn’t have new products to show, except for the Pure Marine XL HC LED. Instead, the comapny took the occasion to present itself. And we think it succeed very well.

But let’s see in detail the aquariums we could photograph.

Askoll aquariums present at the Interzoo 2018

Let’s begin with the Pure Marine XL HC LED that dominated the booth, minimally set up. 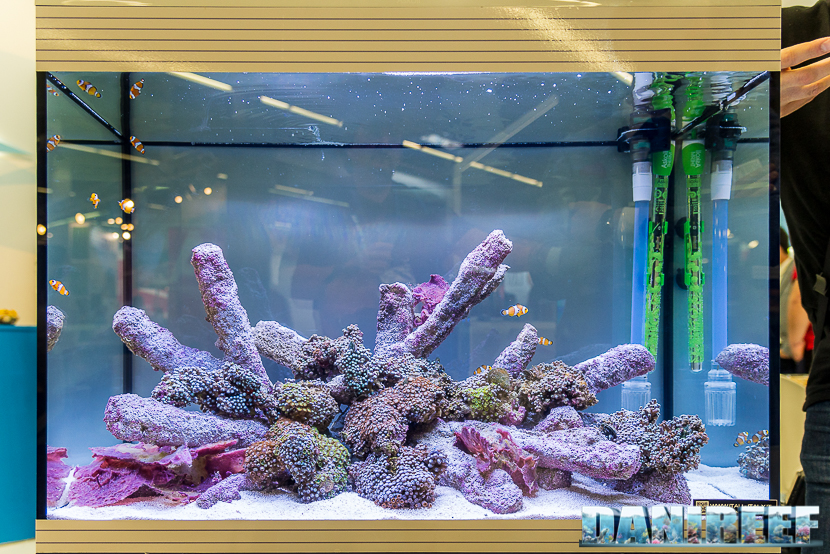 This is a set up that particularly enhances this type of aquarium. It’s not an aquarium for SPS corals, which would have another price and target audience. But it’s a good aquarium, with beautiful finish, especially dedicated to fish and soft corals or LPS. 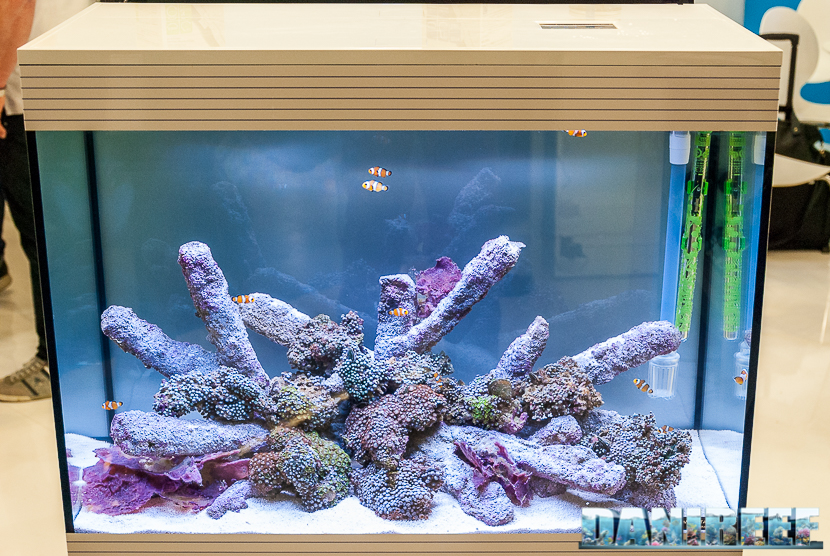 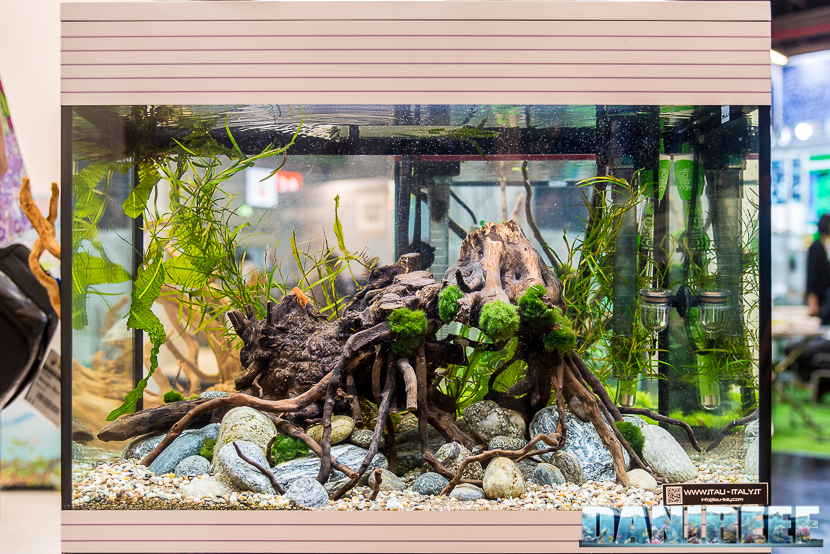 Pictured above is a beautiful Askoll Pure L LED aquarium, with a minimal set up and a beautiful shrimp that we can see in detail below. Actually, if you can identify the species, please let me know! Thank you. 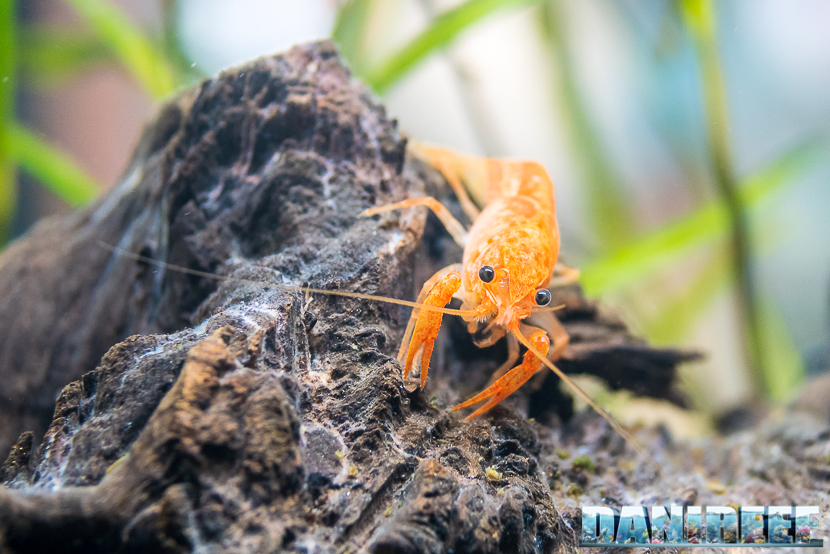 Below is an Askoll Pure XL HC LED. I like this set up even more, it really enhances the aquarium in which it is contained. 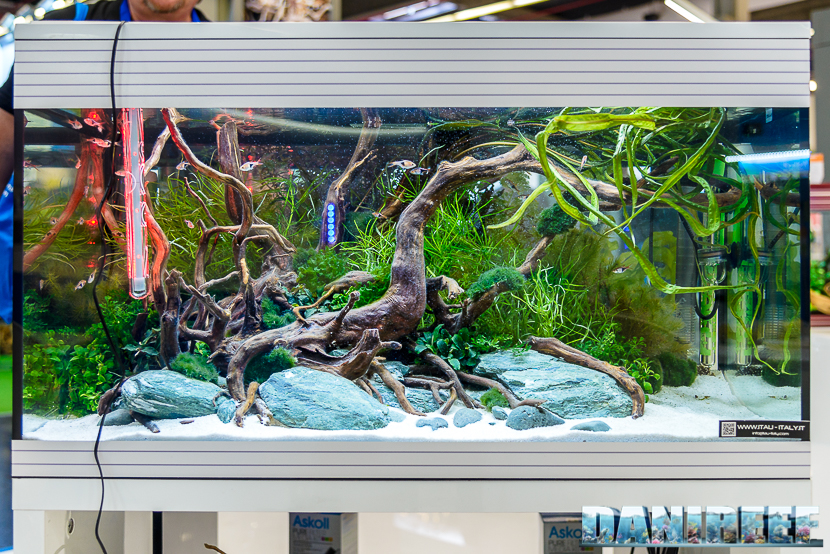 Below is what I believe to be an Askoll Pure XL HC Black that shows a beautiful submerged landscape. 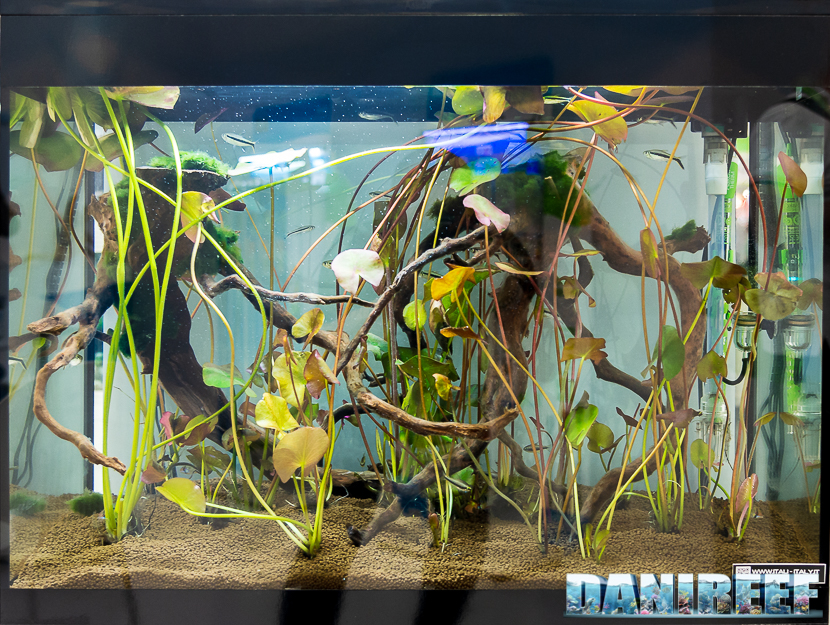 And finally, an aesthetic jewel with its ruby red color. 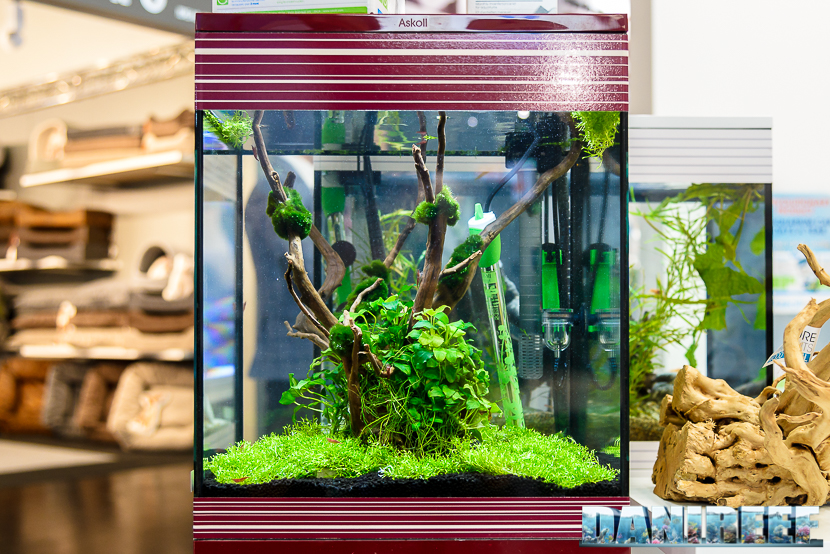 The Askoll Pure M LED is a wonderful light, and the combination of the green of the Aquascaping and the red of the chassis enhance it particularly.

These aquariums are very beautiful, aesthetically planned to be in houses, and a really good choice if you want to enter the aquariology world through the front door. 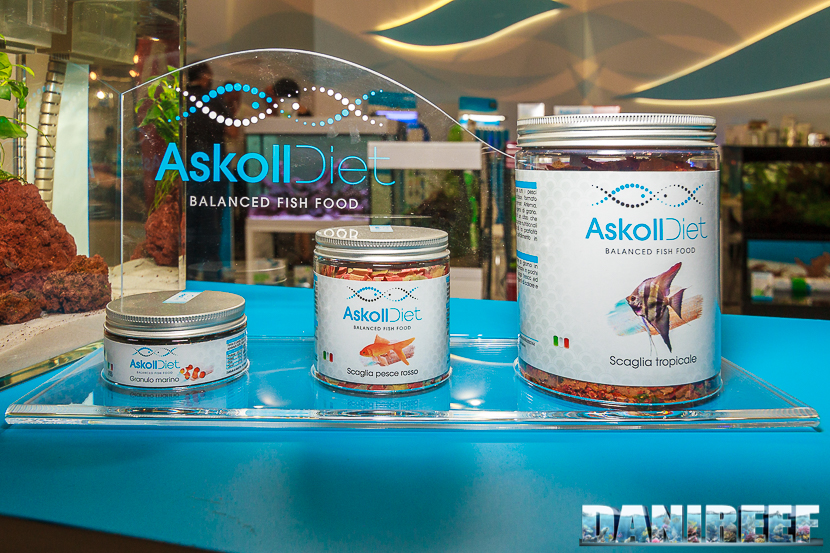 The Askoll Diet is a product that we didn’t know about and that made us very curious.

The box caught our attention right away: it’s made from a transparent plastic and it has an aluminum top. Aesthetically speaking it’s very appealing. We’re curious to test the marine grain, but we’re not positive if we’ll be trying it after we’ve finished with the current one.

Other Askoll products on show at the booth 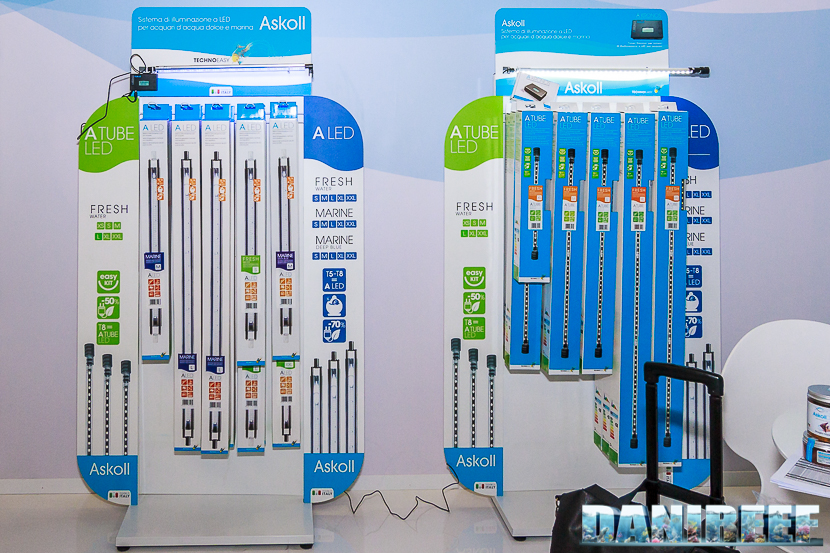 We saw the led tubes, A Tube Led and the lamps, A LED. 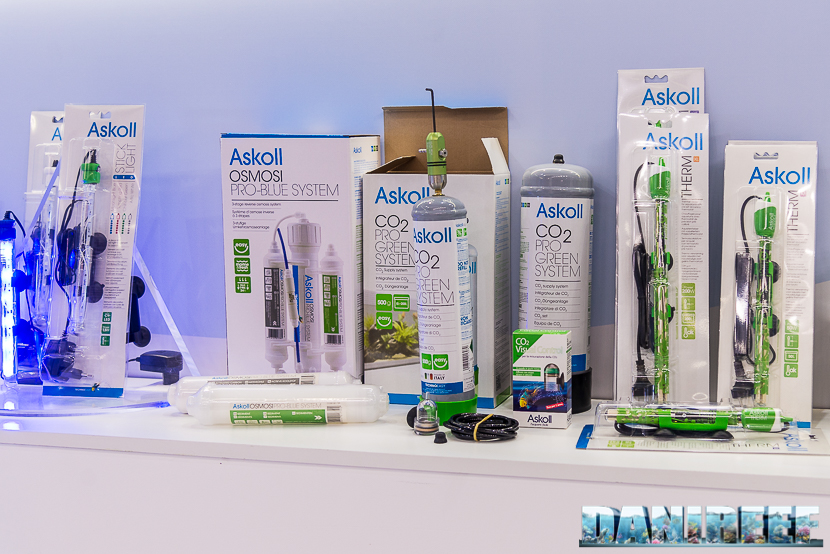 Products for osmosis, for CO2, and submersible heaters. 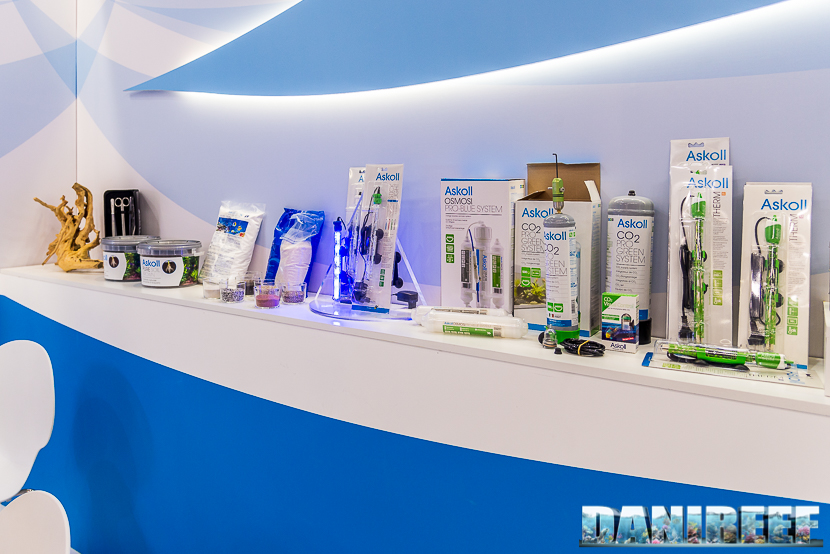 For further information about Askoll‘s products, we send you to their beautiful official site. We invite you also to read our Editorial about the fair to hear about our point of view on this 36th edition of Interzoo 2018: