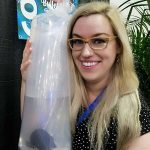 This story begins at Reef-A-Palooza 2018. I saw some shockingly well-conditioned Gem tangs at the TSM Corals booth. I’d never heard of this place and had to know more about their practices and why their fish looked so fat and healthy. They explained their quarantine process, and I was pleasantly surprised and impressed. My friends Mark and Al knew I was enamored with these fish, so they gave me some raffle tickets. I almost left early on Sunday, but I’m so glad I stayed, becauase I got a call from TSM Corals to tell me I’d won a Gem tang right after the show started wrapping up. My friend Judy had to hold me up, I was so emotional. They allowed me to pick my favorite one, bagged him up, and sent me home with him. 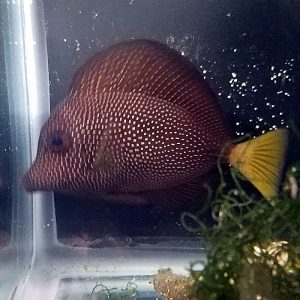 Of course I planned to quarantine and condition the fish for a month before treating it for Cryptocaryon with copper. I set up a 30 gallon quarantine tank using some live rock and a sponge filter I keep in a bin for emergencies, and acclimated my new most prized possession. I have every medication known to fish and was prepared for anything. But nothing bad happened. The Gem tang attacked his algae clip within minutes of being put into his new quarantine tank. Over the next few weeks, I realized the tang had nothing to fix, and I didn’t know how to handle it. I’m so used to new arrivals needing to be de-wormed, de-fluked, and treated for Crypto, but it was clear this fish didn’t need me. All I had left to do was enjoy it.

I got in touch with TSM Corals to ask what they did to make my fish so healthy, and it turns out they use a quarantine and Crypto eradication procedure very similar to my own. I was getting messages from friends in the area who sang the praises of TSM’s procedures and fish health. Ray has been keeping saltwater aquarium since the 80’s, and Matt worked as a biologist at a public aquarium, so that’s why their quarantine procedures are so thorough. TSM Corals’ website says “All fish undergo treatments for various diseases, parasites, and bacterial infections as part our standard quarantine period. Our livestock is also conditioned to accept prepared frozen food prior to being sold. We will not sell any livestock that we know or suspect to be unhealthy.”

As luck would have it, I was planning a trip to Philadelphia to unload some seahorses at Fish Factory in Bensalem, PA, and begged TSM to let me come photograph their facility which is just over the bridge in New Jersey. I brought my best friend with me, and he said the entire time we were there his Fit Bit was alerting him that his heart rate was increased. The first thing we saw when we walked in was a wall of Gem tangs and Interruptus angelfish. It was feeding time, so we got to watch them each attack their own personal algae clips and mysis. Every fish and coral we looked at elicited exclamations of “ooooohhhh” and “look at thissssss;” nothing was underwhelming. We saw giant vats full of rare fish like Arcuatus angelfish, Crosshatch triggerfish, Black tangs, Meredithi angelfish, Consipicuous angelfish, and even a hybrid Meredithi/Conspic.  I heard there were Kingi angels and Fuscipinnis anthias there the week before, but they had already sold before I had a chance to see them.

I’m not as interested in fish these days, so I spent more time in the coral section. They have their beautiful Acropora mother colonies on display so you can see the exact coral your frag came from and what it will look like when it grows up. I chose a blue Tenuis and a Strawberry Shortcake. Matt recommended a purple frag that didn’t look like much in their tank, but he said it has orange polyps under LED lighting. I’m so glad I trusted him, because it has colored up amazingly under my Aqua Illumination Prime LED and is now my favorite piece. They have everything from Euphyllia, Lobos, and softies to high end Mushrooms, Zoas, Acros, Acans, Chalices, and Scolys. I didn’t see a single brown, ugly, or unhealthy coral in the entire facility.

The facility is large, 5000 square feet. It seems larger when you’re there because it’s so well organized and clean. If you get tired while you’re shopping, TSM Corals has a comfortable couch facing an enormous display tank complete with gorgeous colonies and a male Lennardi wrasse.

I ended up spending far less money than I had planned to, simply because the prices were so reasonable! I left with an expertly packed box of stuff for two of my own tanks, and for my parents’ tank. Of course I always recommend quarantining new fish and at least treating them for Cryptocaryon, but if you absolutely refuse to quarantine and you want to find a source for high-end fish that have already been treated and conditioned, check out TSM Corals in Westville, NJ.