My take on Clearwater Scrubbers

Those of you that have been following my social media accounts and this channel know that I am a HUGE advocate of and strong believer in natural algae filteration for aquariums. From DIY turf scrubbers to various different algae reactors and scrubbers, I have tried many different products on the market. Some people ask me why I use algae and my logic was always “if works for mother nature, why won’t it work in our aquariums?” Simple enough, right? If that’s not enough proof, Julian Sprung, who I look up to and respect tremendously, uses algae as the primary source of nutrient removal for his beautiful home aquarium. Here is a video that I made of his tank:

Going back to our regular scheduling, here is a tank that we haven’t seen in awhile. Julian Sprung’s 250g peninsula tank. Take a look at this beautiful, mature tank that just defies the odd by keeping things extremely natural and simple. Enjoy!

Pretty epic tank, right? Yes, that relies primarily on algae. When the Godfather of the hobby tells you something and does something, you stop what you are doing, listen, observe, and learn.

During Reef A Palooza Orlando 2018, my good friend Robert at Marine Depot recommended that I check out Clearwater Scrubbers. When I approached Josh of Clearwater Scrubbers,I was fascinated by the lights that he was using. I have used many different scrubbers and algae reactors in the past, but I have never seen a company in person (I have heard that Santa Monica uses them and they are great company as well but I haven’t had the opportunity to check out their units)  that used this spectrum of lighting to grow algae in our hobby. So I decided to learn about this light and the science behind it with Josh at the show; here is the video from RAP.

As I was walking the show floor of Reef A Palooza, I became intrigued by the red and blue light that caught the corner of my eyes and even more surprised that it was coming from an algae scrubber from Clear Water Scrubbers. I’m no stranger to algae scrubbers.

So I was curious. How well does this unit, which has been picked up by many of the big vendors such as BRS and Marine Depot, actually work? BRS actually called this the best filteration unit of 2017 on their website. So I got a unit to test it for myself. I had purposefully neglected my tank a bit by slacking on the water changes and feeding much heavier. I have many tangs and a 7 inch crosshatch trigger named Hassan, so it wasn’t hard to do and he happily obliged and chomped away at the extra feeding sessions with gusto.

What I noticed that was different about this unit

1.) Build quality is noticeably better than some of the units that I have come across. It has acrylic holder for the pipes and the unions. Keeping the pipes sturdy, it will eliminate the possibility of leaking from the unions and joints.

2.) Spray bar has straight cut out line instead of holes. I have seen that it increased the flow of the water. Will it get clogged by excess growth from the algae? We will see.

3.) Lights are in a different color. Long before our industry, people in Horticulture have been using this spectrum to grow plants for better yield results. From what I was told, Mike at SB Reef Light put in the leg work to find out about this and then selected the right diodes to promote optimum growth.

After the initial running up of nutrients, I set a schedule of limited maintenance to really gauge this unit’s effectiveness and to rule out anything else that may be affecting the numbers.

During the trial of this unit, I did a 10% water change once a month instead of bi weekly water changes of 20%. (With the exception of August as I was trying to push this review out. Instead of month, it was 3 weeks) I limited my frequency of media changes (GFO, carbon), only changing them 1 time in 3 months instead of monthly changes of all my medias.

Giving this unit a run for its money. 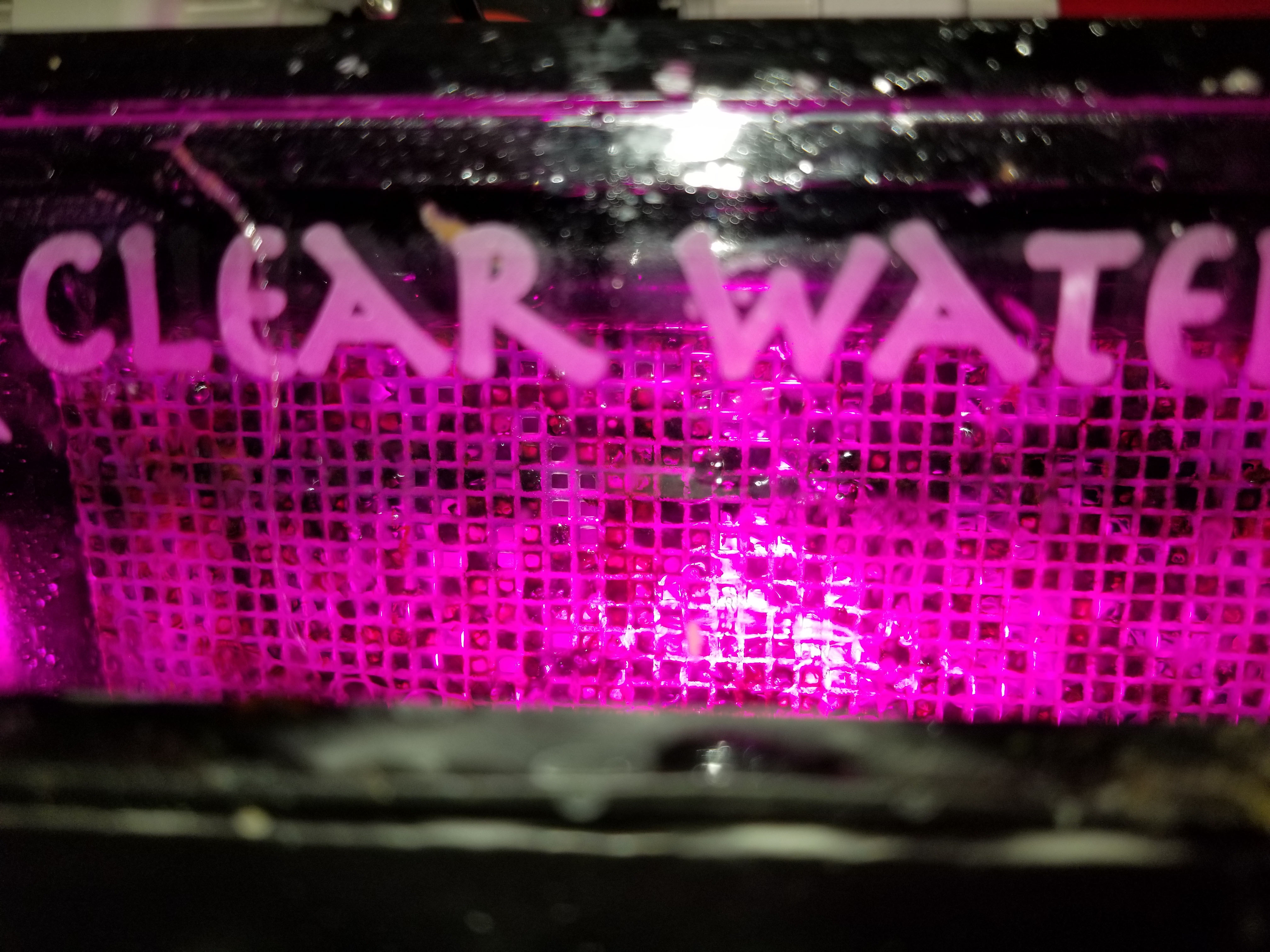 I connected the unit to my manifold connection and gave it plenty of flow as I was directed.  After one week, I started to see some algae forming on the sheet. 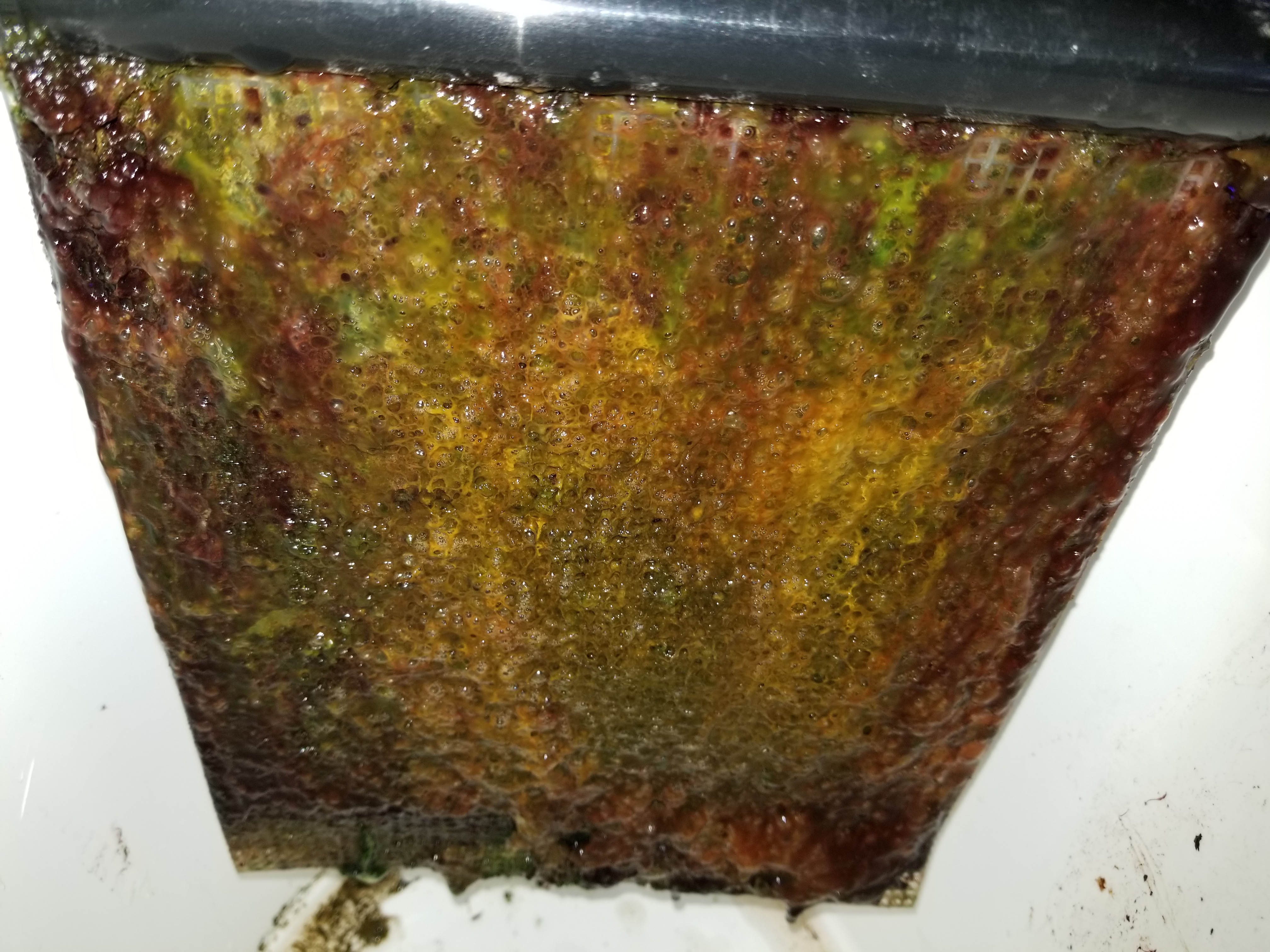 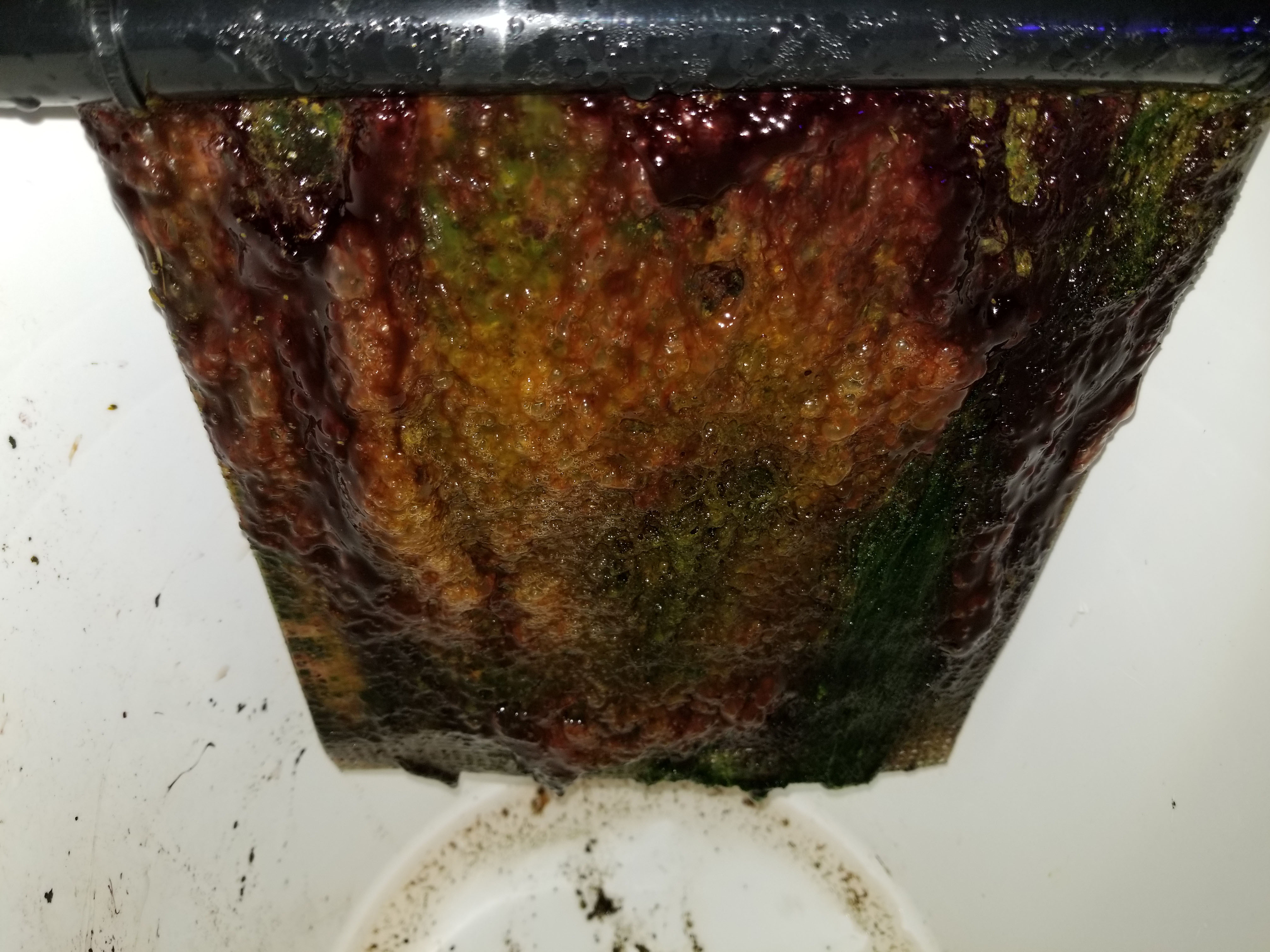 Pctured above is both sides of the algae sheets after 2 1/2 weeks of running the scrubber on a full 24 hour cycle. Since it was out, I cleaned the sheet and dried the algae and it came out to be 94.1 grams. (Wet algae weighs 10 times heavier than dry) 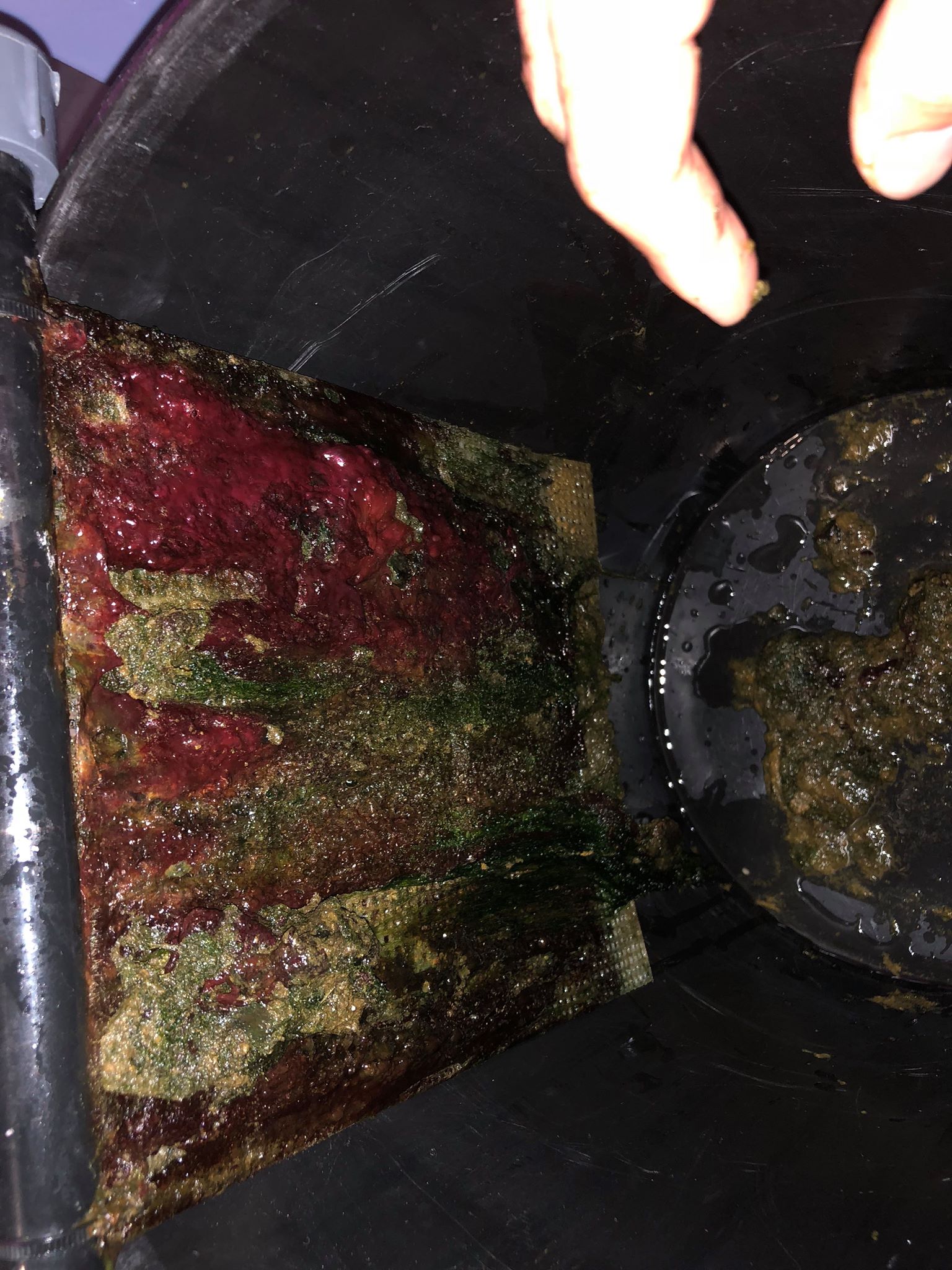 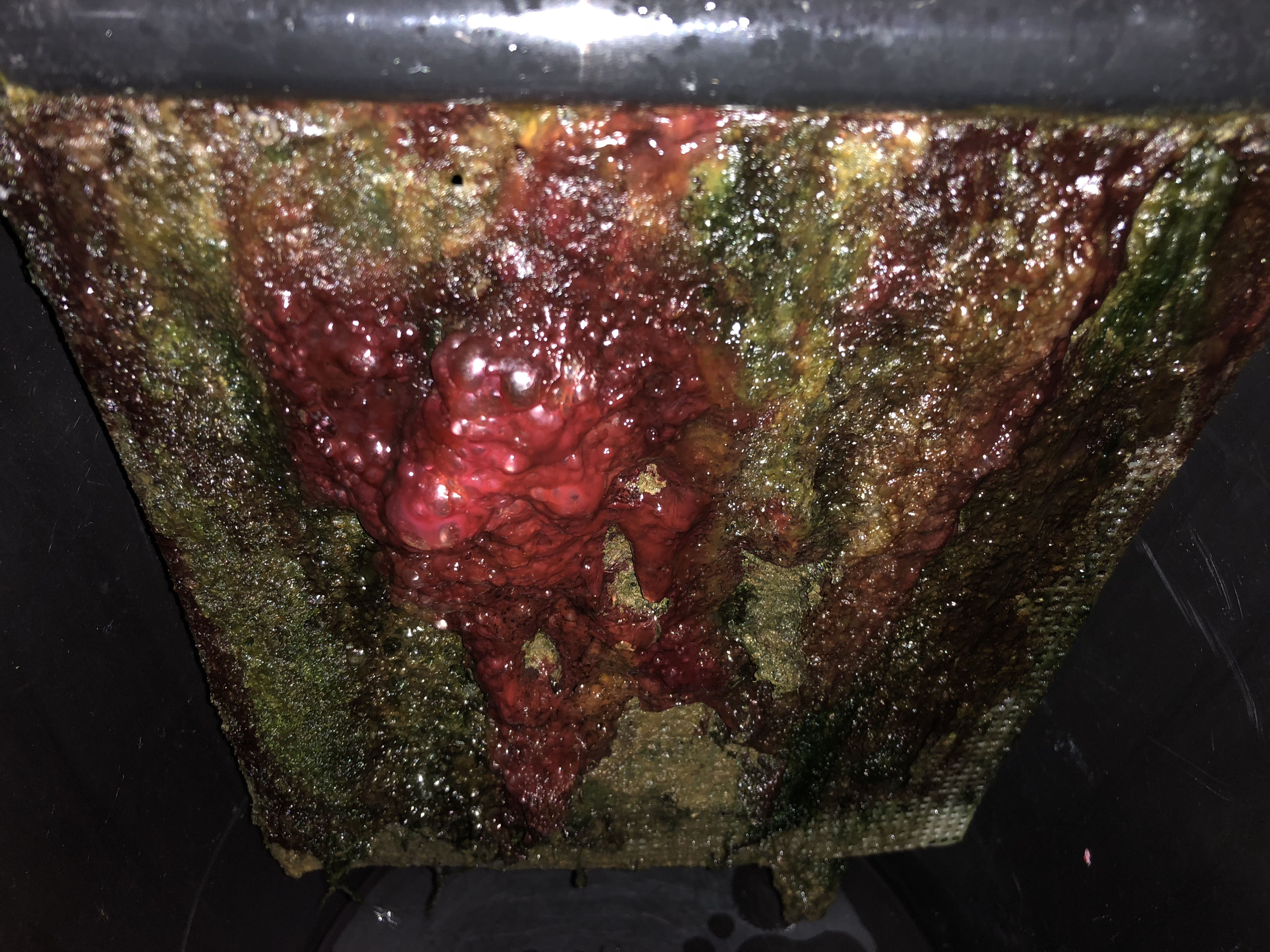 After the first cleaning, I let it run for almost 3 more weeks. Algae, as well as cyano, started to grow on the sheet. The tank was clean of any algae and cyano that I normally got in one corner of the rockwork. Here are pictures of both sides of the sheet. Do to the limited amount of space, I scraped the surface and tons of algae came off, as you can see in the picture below. This time, the  algae was much thicker and overall much more prolific in growth. 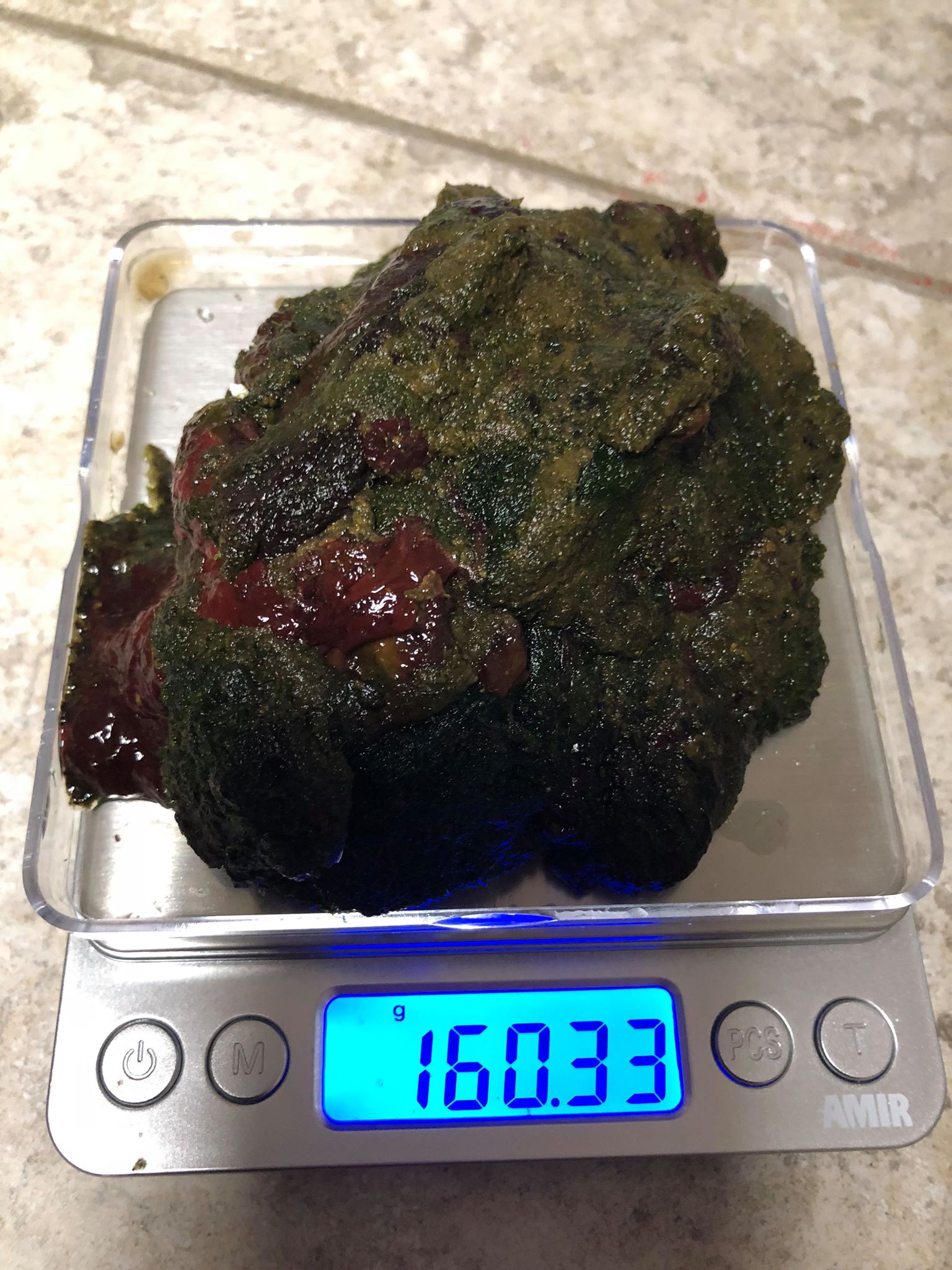 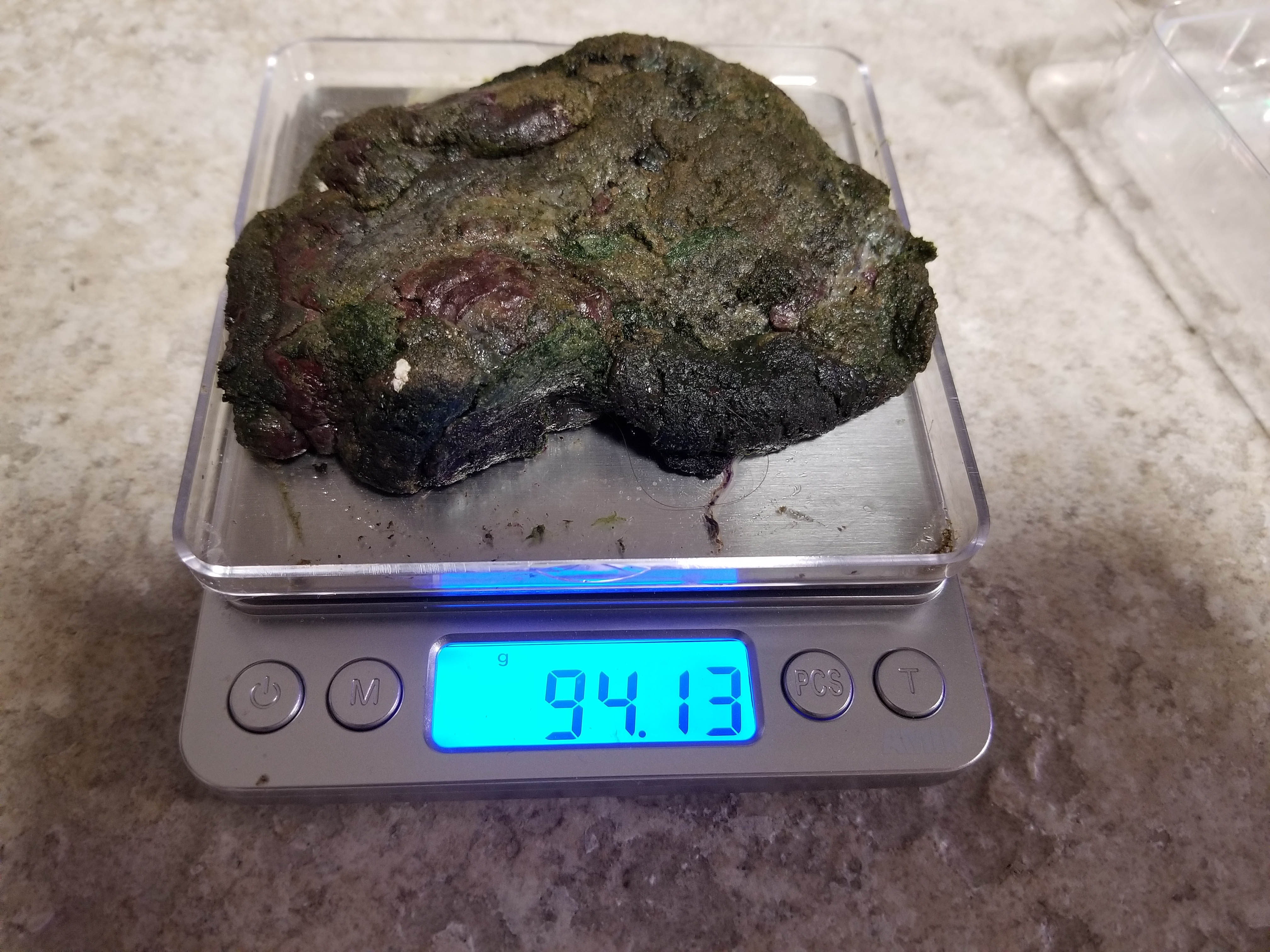 The first picture is the algae with a lot of the water squeezed out. (I know it’s still wet but you can see the hand indentations. Can’t you? haha) As you can see the weight is 160.33 grams. But water weight is still there so I went ahead and let it dry out in the hot Florida sun for three days (Don’t do this. Your neighbors will hate you because this thing literally smells like poop) and this is the actual dry weight of the algae produced by the unit. So we can see that it can effectively produce algae.

So how much nutrient did it actually export? 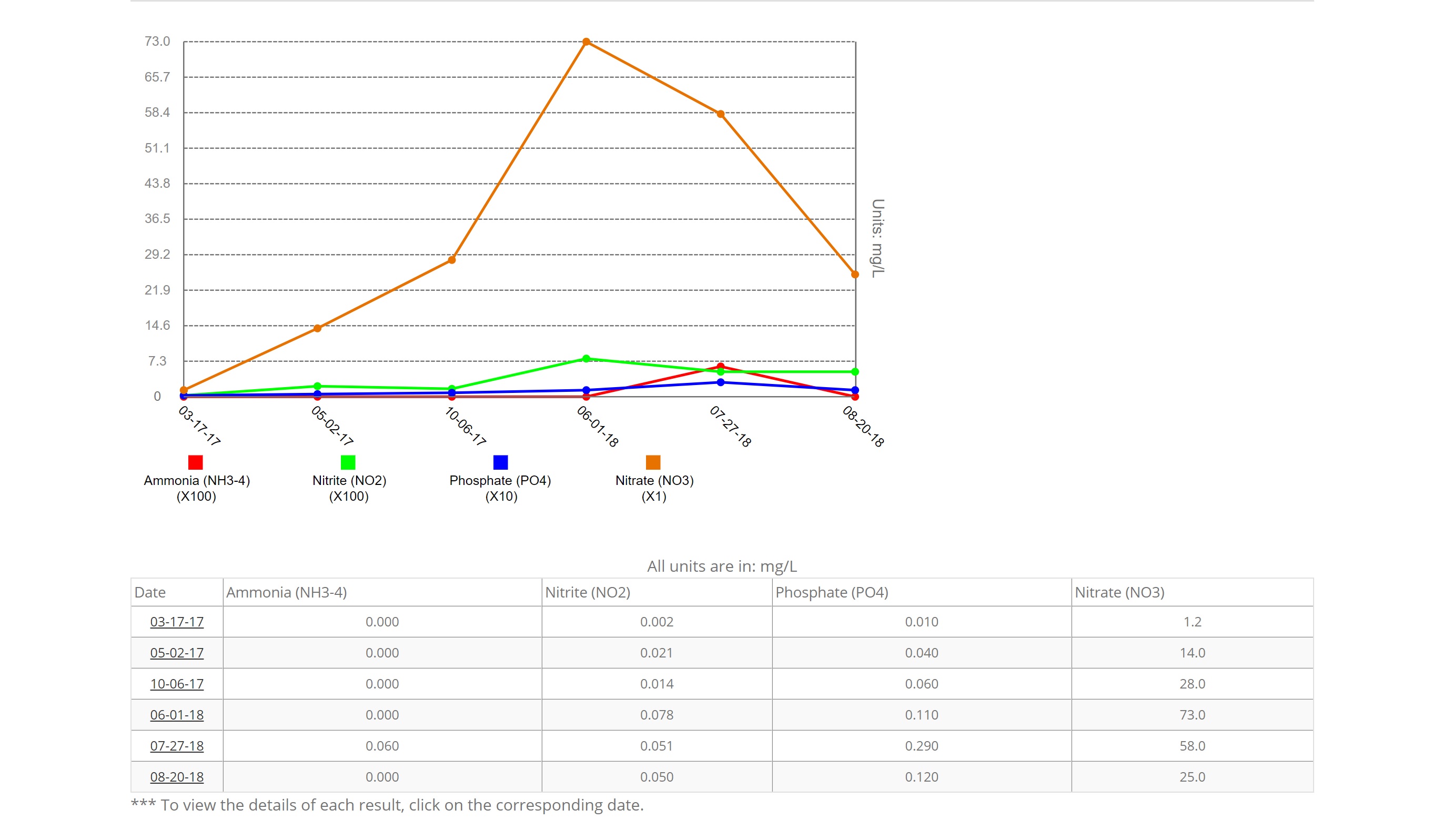 For fast turn around time and for accuracy, I sent my water to be tested professionally by Aqua Medic Water testing. It is one of the oldest water testing labs in our industry, and is located in Loveland, Colorado.  You can see from the graph that my nitrates jumped up tremendously on June 1st.

What in the world?

That’s me feeding my trigger 1 pack of LRS Reef Frenzy in one week as well as my usual feedings of pellets, nori, and other various frozen food on a daily basis with almost no water changes in between. My fish are my babies and they certainly eat better than most people.

Phosphate levels went up surprisingly during the test on the 27th of July but maybe it’s not so surprising, considering the fact that I hadn’t changed any of my media for a few months. I did change the carbon and GFO after this test. What you should really pay attention to is the level of the nitrates. It went down by 15 points which meant that this unit was working. This is also when I noticed a huge increase in algae harvest. Visually, the tank looks phenomenal. Everything is growing and happy, and the colors are vibrant. Let’s move forward to the latest test on the 20th of August. A few days after the monthly water change of 10%, I sent out the water to be tested for the final time for this review. Results were spot on.  Phosphate, with the help of the GFO media that I replaced 3 weeks ago, dropped down to 0.120ppm from 0.290ppm. Nitrate went from a crazy 73 ppm to a much more manageable 25 ppm.

Like I said before, I am a huge advocate for algae filteration so I think my thoughts on this can sound a little biased. That’s why I spent the money to get the water tested professionally and you can see all of the good and the bad. I think this unit is great addition to any hobbyist’s setup that has room above their sump or near it. (keep in mind that it has to sit higher than your sump as it is gravity drained) This is natural, it’s effective, and it reduces the need for carbon and GFO (which makes GFO last longer). There is reason why big carriers like BRS and Marine Depot carry this brand, and I think you will be impressed with what this unit can do for your tank. If I can give a tip, try to attach a filter sock at the end of the drain pipe. This will eliminate any clumps of detritus or algae going into your sump or in your tank when you shut down your pump and restart again.

Hope this helps to make your decision to use algae filteration in your system.

My favorite aquarium show ever! – Aquashella 2018