Before we dive into today’s article, let’s take a trip down memory lane, in particular, reefing equipment from the past. If any of you have been in the hobby for more than 10 years, you’ve probably seen, heard of, or used a sea swirl. It’s an old but effective relic from the past. It uses a motor to distribute the flow coming out of your return pump at a constantly rotating 180 degrees, delivering flow to the areas that may become a dead spot otherwise, essentially making your return pump an additional and effective wave maker. It was a great concept and was widely accepted and praised by many hobbyists with larger aquariums. Tony Vargas endorsed and championed it in a big way and has influenced many people to try it out. 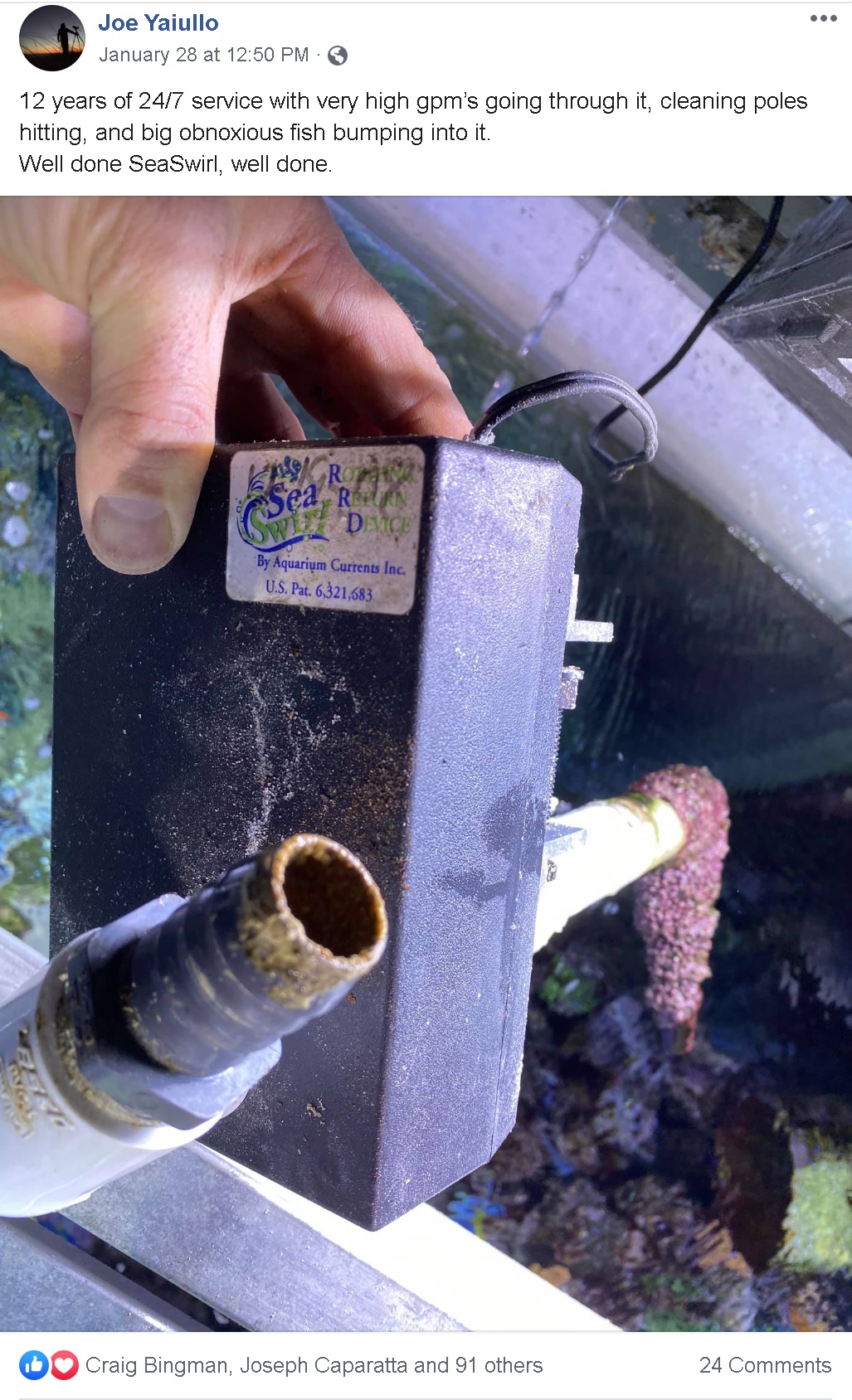 As I write this today, Joe Yauilo is replacing the unit he has used in his Long Island Aquarium 20,000 gallon exhibit after 12 years in service / 24 hours a day, 7 days a week, and 365 days a year! 12 years!! Talk about durability huh?

But this isn’t for that. Did you know that the same company later made another product with the same concept but one that was made for the wave makers spin around 180 degrees? I was truly impressed by them and was really confused and puzzled that they didn’t take off like I anticipated. Instead it became an oddity, somewhat of a collector’s item in the reefing community. Overall, widely forgotten by all, its true potentials never fulfilled.

With that nostalgic trip down the memory lane out of the way, I have noticed something exciting and wanted to share with you guys. Last month, I saw something interesting on my young, innovative friend Logan Vanghele of Reef Breeders’, personal Facebook page. I immediately reached out to Logan in excitement to find out more and to see that if indeed this was the item that I thought it was and that it was back. One product that I really believed to be a game changer from so long ago. A product that in my opinion, never got the fair push and the attention that it deserved. Ladies and gentlemen, as you probably guessed by now, I present to you Coralbox 01 – Motion of Wave Maker. 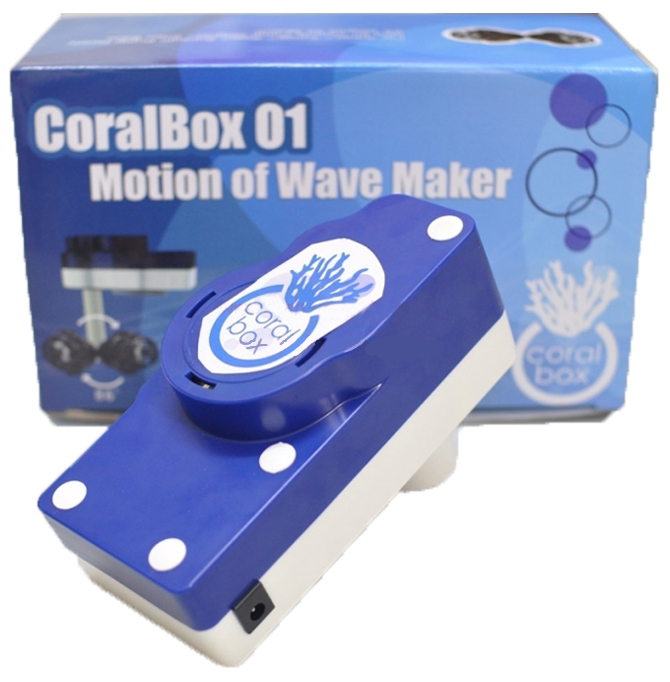 This product is the new and improved version of the product that I saw years ago.

How is it different? First of all, it’s now utilizing a power-efficient DC motor instead of the traditional AC motor which doesn’t sound like much, but when you are running them 24/7, it will surely save a few dollars.

Unlike the older predecessor, this unit comes with some adapters that will help you utilize some of the popular wave makers in the market. Flexibility was an issue with the older model. With the new unit, a magnet adapter is included for the majority of us that use magnet-based-holder wave makers for our aquariums. I am actually using it with sicce‘s latest SDC wave maker which works like a charm. For people that prefer suction cup design, fear not. It comes with an adapter for that as well. 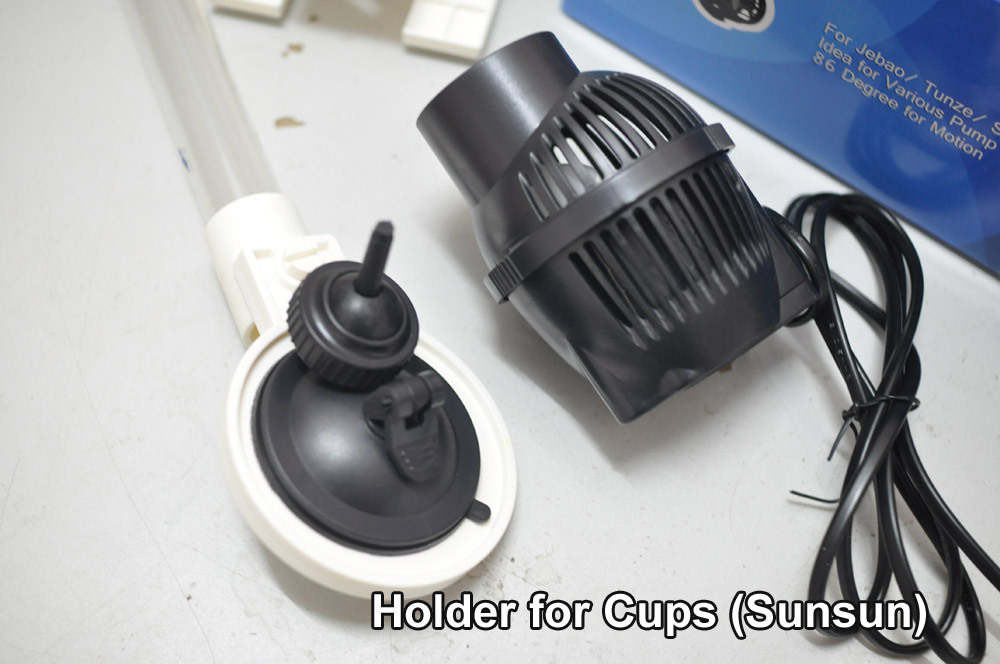 Flexibility doesn’t stop there. The adaptors are being held with a clear plastic pole which can be used as it is or cut to desired length that will make the unit versatile in delivering flow at any height of water.

To learn little bit more, I have been speaking to Logan while he tests the product out for couple of months prior to its release and learned few things that I would like to share with you guys.

(Me in bold letters)

Were you aware of this product before?

I was unaware of this particular product until recently. I periodically check with my suppliers to see if there is anything new on the market, and this product piqued my interest as you don’t see a whole lot of them in operation in the US.

What made you get into this product and bringing it over to the US?

The pump rotator was popular in the European market, so I decided to test it out with one of our Reef Power RP-M pumps. I noticed there were few affordable options on the market for these, and a lot of the newer pumps on the market have a limited ability to be aimed/rotated.

Our Reef Power RP-M pump is mounted flat to the glass- it can’t be rotated. While it has a pretty wide output, not being able to orient the pump to focus on a specific area can be limiting. For the pumps that can be rotated, like our Coral Box QP+, they still remain in a fixed position. So it requires multiple pumps to cover larger, wide aquariums.
The Coral Box Pump rotator allows you to take any submersible pump and create wide-sweeping flow patterns. This disperses the pump’s output into a wide swath of your aquarium, eliminating dead spots and hot spots. We’ve all had a power head make a hole in the sand bed at some point- the sweeping motion prevents water movement from being focused on one area for a prolonged period of time.

The mounting system included works with rimless tanks with glass up to 3/4”, and Euro Brace trimmed tanks. One drawback is that the current mounts do not work on plastic trim. We will likely 3D print a solution for this later one.

Is there any weight restriction on the power head that I can use? for example, old school Tunzes or even neptune System’s wav wave maker?

It can handle our RPM at full tilt, which is about 2,600 gph. For larger pumps, 3,000gph or more, there is a bit more back pressure. This can tilt the unit back a bit. I would recommend that the pump is under 4,000 gph, and for pumps 2,000gph+ it is recommended that you avoid pulsing wave modes in favor of a constant or slow pulse output.
This is mostly for the sake of noise reduction- if a large pump pulses it can move the unit back towards the glass at the end of the rotation. With Euro Brace trim, you can move the unit further out away from the glass, so this isn’t as much of a concern. Shortening the included tube will also reduce sway.

The included mount works with magnet or suction cup mounts up to 3” in diameter. Both sides of the magnet need to be submersible. This will work with any ReefBreeders, Coral Box, or Jebao pump, as they all have submersible outer magnets.

There you go guys! All the information and pro tips that you need for the new Coral Box 01, wave maker rotatory for your aquarium from the man who’s bringing you this product to the stateside. If it’s something that you may be interested in, be sure to check it out. I know I will!

Join Us Tomorrow for the HUGE SALE!

Pseudanthias evansi in the Wild