Small male Abdopus aculeatus approaches the den of what he thinks is a female. He tries to mate, only to discover her guarding male inside.

This studly little algae octopus (Abdopus aculeatus) was on the prowl for a hot date when he stumbled upon a female’s den. He reaches out a hopeful arm and cops a heavily suctioned feel, hormones raging and amped to make his next move. He continues to stretch his long mating arm, fishing around for her funnel opening. Something doesn’t feel right for the octopus. Well, darn – that’s not a female at all! That’s another male, and guess what? He’s pissed!

Not too thrilled with the uninvited advance, he turns on Mr. Grabby and a wrestling match ensues. This interaction was caught on camera by Monterey Bay Aquarium Research Institute scientist Crissy Huffard. Algae octopuses have a rather interesting way of mating, often not even entering the female’s den and just reaching inside, having their way with them. This is a bit unceremonious, skipping the usual courtship of dinner and drinks and all, but it seems to work for them. Larger males will often guard female dens, warding off any males who come a knockin’. Well, this doesn’t always work in the larger males’ favor. The smaller males become a little sneakier, and pussyfoot their way into the female’s den when the larger males wander away. To further safeguard their tricks, the smaller octopuses will often hide their male features and disguise themselves as females. Such is the case here, when the big, manly octopus returns home from a long day doing Cephalopod stuff to greet his captive female, when the male in hiding dropped the charade and neither enjoyed the awkward encounter. Oh well, we all make mistakes. Read more about sexy octopus things over at Scientific American. 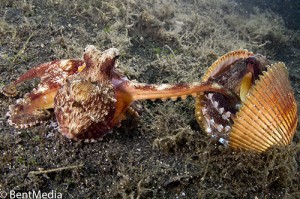 Live Sand and its Importance in Marine Aquariums