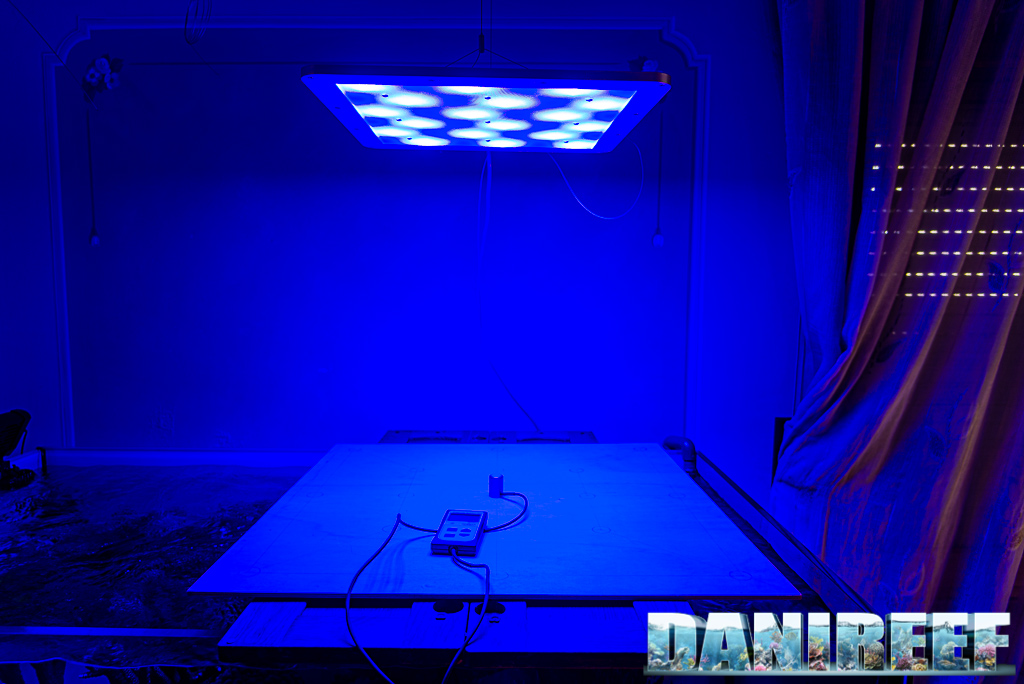 We had the opportunity to test the new ATI Straton thanks to Jonathan, who just bought three of them for his tank. We analyzed the PAR and created the distribution curves. Let’s see how it went.

The ATI Straton is a LED ceiling light that has been on the market since last year, then due to the Coronavirus and the well-known slowness of ATI, has been distributed at a snail’s pace. Despite this, we really like this ceiling light, both because of the distribution of the LED and for other things we’ll reveal in this interview. The ceiling light is very thin and uses a passive cooldown, which is a critical point that always comes out about this ceiling light.

Technical characteristics of the ATI Straton

The ceiling light is square, and only 14 millimeters high, with 7 LEDs of different colorations divided into 7 channels, so each channel has only one LED. There aren’t any LEDs for moonlight, which are present in other ceiling lights. The LED aren’t distributed but grouped in sets of 4. Moreover, Straton has logically divided the LEDs into three parallel bands that can be managed individually, creating different switching, but also dimming the bands in case the temperature goes over 55 degrees C (131 F) , without switching them off.

The construction of the ceiling light is flawless. There aren’t any creaks and the structure is just so solid. We know that the inside of the aluminum works as heatsink, but we don’t know precisely how it’s made because we didn’t disassembled it, even though we were extremely curious. There aren’t any buttons. The ceiling light turns on when it connects to the power then is set through WiFi. I would have preferred Bluetooth, but we’ll see this detail later.

The ceiling light has to be set through a web app. This means that there isn’t a specific app, but a website for our browser. This solution is more powerful because allows any device with a web interface to interact with the ceiling lights, but not all the devices can visualize the page well, and the access configuration is not that intuitive. The web app is available only in English and Dutch. We used the English version.

Pictured above is the chart where we set the curve. In order to make it simpler we made a video in which we connect and set the ceiling light, so we won’t have to spend too much time on this topic. Above there’s the basic set that switches on the bands of the ceiling light.

You can create or modify the curves, or even choose one from the available preset. We always recommend this choice, unless you know exactly what you’re doing. In fact, with a ceiling light that allows you to change all the channels, it’s extremely easy to create problems for the corals by lowering certain channels too much or forcing others too much. On the lower left, you can see the temperatures in real time.

One last note about the curves: you first have to set some channels per color, then bring them to the curve. It’s not very intuitive, but once you understand the process, it’s not that difficult, even if requires more time than usual.

Our new method: DaniReef LAB for PAR measurement of the ATI Straton

Antefact: (this paragraph is the same for each ceiling light measured with our DaniReef Lab for explaining the working method) During the long nights spent on our forum we always wondered how we could compare PAR from different ceiling lights. Even though we had the perfect device, the Quantum Meter MQ-510 di Apogee, we always referred to the value measured at the center at 20 cm of distance, more or less.

The Quantum Meter MQ-510 measures the PAR, expressed in PFFD: photosynthetic photon flux density in μmol m-2 s-1. This device is calibrated to work underwater, so if it’s in air the measured value has to be divided by 1.32, the dive factor. We have to do the conversion. The values you’re going to see are correct.

In total the three measurements are made from 17, 37 and 57 cm of distance. Because they were done in air they will be corrected.

The ceiling light has been placed on wood holders. The points that weren’t on the board have been counted in the following chart.

And this is the corresponding chart, we came back to the classic scale in ortder to compare similar ceiling lights.

In this step we adopted a distance of 37 cm.

And the corresponding chart:

Increasing the space between sensor and ceiling light, the curve is even more complete. It decreases on the side more that we expected, maybe. The value in the middle decreases from 1612 to 743 μmol m-2 s-1.

Finally, we adopted the distance of 57 cm.

And the corresponding chart:

With a bigger distance between ceiling lights and sensor, the difference decreased between the PAR in the middle and on the sides. There’s more uniformity, but the total power decreases. The light spreads, but the central value decreases from1612 to 743 to 385 μmol m-2 s-1.

It stands out that the covering is completely uniform.

Let’s continue with our technical measurements. We can see how, in a chart, the PAR collected in the middle decrease in the three different distances of the tests.

This is the most significant and most comparable data. The energy variation. We calculated the volumes of the three surfaces previously seen. Moving away from the ceiling light the PAR decreases, but the light illuminates a wider space. We try to consider all the light energy in this square of 60 cm under the bar. And it’s clear that the three values of 1,333,430; 920,227 and 631,087 assume a different connotation compared to the values in the middle. When the first ones are low because the distance is high, the subtended area, that is the energy, decreases less, because the “main part” of the lighting is in the middle. This is the theory. But the ATI Straton have a linear decrease of energy, because the LEDs are more spread out.

Looking at the values of the three curves, it’s noticeable that there is much more light towards the edges at 57 cm than at 37 cm or at 17 cm.

Value in the middle for each channel at three distances

The two channels that contribute the most to the PAR emission of the ceiling lights are Blue and White. White and Blue alone have 883 μmol m-2 s-1 when the other 5 channels together have 758 μmol m-2 s-1. That means that two channels make the 54% of the total.

The measurement of the consumption was made possible thanks to the useful RCE PM600 that can also measure the Cos(fi) (or power factor). The result is given in watts.

Pictured above is the maximum power, and below is the Cos(fi).

The electric consumption is lower that declared, by 8%. We measured this value many times, on both the ceiling lights we had. We were more interested in the PAR than in the closeness to the data. We wanted to understand what we can breed with this ceiling light.

How to value these numbers in aquarium?

This is a good question. At first we thought that we could transport these values to the aquarium tout-court. Than we filled the aquarium, inserted the probe, and redid the measurements. We fazed but, as we have already said, we’re going to talk about that in another article. Basically, while at 20 cm the result is practically the same; as we progressed, thanks to the glass and the water itself reflecting the light, we found up to double the values measured in air. Obviously this isn’t a detail that can be standardized, so we think that our method of calculation is the most correct, and the best for the comparison of coverages of different ceiling lights.

Recently we started to use the new Apogee’s Quantum Meter MQ-510. Because of this, we can’t perfectly compare the data of the other ceiling lights, because before now, we used the probe Seneye.

The energy per watt is less than the comparable Philips Coralcare, but the maximum value is higher. They have similar energy, even taking into account 20 watts less for the consumption of the Philips. This probably depends on the specific LED. The economic efficiency is slightly less than the Philips. In any case, they are respectable values. And for now it has the record of energy produced.

The absorbed power is 211 watt, so the relationship cost/watt is 4,22 euro for each watt. You can consult the following chart for the comparison with other ceiling lights. Notice that they’re in order of decreasing efficiency, so the best ones are on top.

The ceiling light is extremely well built, firm and solid. Very beautiful. The energy efficiency is high and the cost per watt is rather low. The values are perfect for nanoreefs and for aquariums up to 70 cm per side, for breeding SPSs and for every other animal. As the size of the aquarium increases, the coverage decreases, so I suggest 2 of these ceiling lights for 120 cm and 3 for 180. The energy is linear in the water column.