This marvelous book is the story of Piper, a charmingly defiant young dolphin who is exiled to the open sea for questioning her clan’s strangely reclusive ways and fanatical pod leader’s obsession with a “rival” species. During her harrowing exile, Piper discovers the real danger threatening her clan. Against counsel, she embarks on a perilous journey home to Kwi Coast to save a clan long entrenched in its own ignorance. This tale brings readers on an adventure into our mighty oceans where its multitudinous lifeforms and enrapturing habitat are facing greater perils than ever. 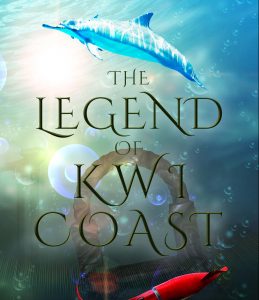 I had the pleasure of asking author Nick Checker a few questions about his background, process, and plans. Enjoy!

1. How long have you been writing/how did you get started?

I have been writing since childhood, starting with adventure tales and stories with animal characters … inspired initially by the first book I ever read on my own: Rudyard Kipling’s The Jungle Book.

Ultimately, I would declare “Reading to be the vitamins of the mind.” I wanted to one day be among those who created imaginary worlds for others to enter and explore, and where they might immerse themselves entirely. But, along with creating a rousing tale, it also became important for me to have something to say that was worth hearing and heeding.

2. How did your interest in the ocean start?

I grew up on the coast of southern New England; a constant exposure to the ocean and the many forms of marine life it contains was inevitable. Swimming, boating, visits to Block Island and Fishers Island, negotiating rides on marine science vessels out of Avery Point UCONN, this area invokes a natural spirit of exploration. The last great frontier on Earth was not far from my own doorstep.

And the greatest teacher of this vast watery frontier was the immortal Captain Jacques Cousteau with his television specials and fascinating books based on his daring undersea explorations.

The late, great folk singer, John Denver, offered a musical salute to the Cousteaus and their crew with the beautiful ballad Calypso. I hope to offer a meaningful salute of my own via The Legend of Kwi Coast … and the engaging exploits of its brave young dolphin, Piper, as she dares both the wonders and dangers of the open sea, and learns the value of knowledge — and the perils of ignorance.

3. Did you have any other influences?

Susan Casey, a contemporary pioneer with insightful firsthand research, writings, and courageous exploits on behalf of the sea and its wondrous lifeforms. Her engaging and enlightening book on dolphins (and other marine life), Voices in the Ocean, is a must read for those who revere our oceans, its inhabitants, and their future. Casey’s book was another integral source for my research and revisions. My novel’s origins began long ago, but so much of what I’ve recently uncovered reaffirms that this is its time.

4. Who is its intended audience?

I always describe The Legend of Kwi Coast as a young adult novel that contains a strong appeal to older readers too. Piper’s journey is an important one that concerns us all.

The novel’s release date is October 3rd, with a book launch set for Tuesday, October 4th at Bank Square Books, 53 West Main Street, Mystic, CT. The book will also soon be available via Amazon, through several other outlets to be announced soon, and directly through the publisher, Wild Rose Press

Thank you Nick for taking the time to talk with me!
Check back for more information when it becomes available!