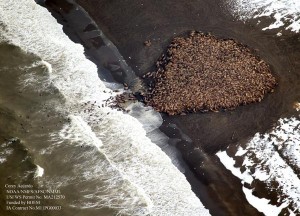 Sadly, not all of them are alive. On a beach just outside the village of Point Lay of Southeast Alaska, scientists from the National Oceanic and Atmospheric Administration snapped photographs depicting more than 35,000 walruses hauled to shore, including 36 of the animals deceased. The somewhat lazy, large-flippered marine mammals capable of reaching up to a beastly 4,400-pounds, utilize the alaskan ice as a resting zone between hunts. Due to warmer waters this past Saturday, aerial scans of the beach found no ice in sight, just the gargantuan throng of tusked giants. An aerial survey conducted just four days earlier showed only about 1,500 walruses on the very same beach. According to the NOAA, large haul-outs like these started being observed in 2007, with the largest one prior being a 30,000 head-count in 2011. The World Wildlife Fund has since spoken out about the phenomenon, with Margaret Williams, the World Wildlife Fund’s managing director of the Arctic program, releasing the following in a statement:

“The massive concentration of walruses onshore — when they should be scattered broadly in ice-covered waters — is just one example of the impacts of climate change on the distribution of marine species in the Arctic.”

Lou Leonard, vice president of climate change at the WWF, also chimed in:

“We are witnessing a slow-motion catastrophe in the Arctic,” Lou Leonard, vice president for climate change at the WWF, said in a statement last month. “As this ice dwindles, the Arctic will experience some of the most dramatic changes our generation has ever witnessed. This loss will impact the annual migration of wildlife through the region, threaten the long-term health of walrus and polar bear populations, and change the lives of those who rely on the Arctic ecosystem for their way of life.”

While the effects of the inevitable climate change are widely known, and the detriment these changes have on our environment have been expected, it’s still jarring and difficult to watch in real time. Original story via Alaska Dispatch News.  Read more on Discovery News and Fox News. 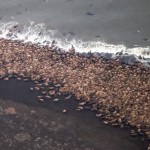