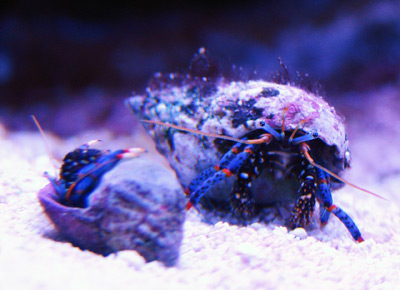 Clibanarius tricolor, the blue-legged hermit crab, is very commonly introduced to marine aquaria, either in conspecific groups or as part of a multi-species “reef janitor” package or “cleanup crew” (aka “CUC” for those who just can’t get enough of those marine aquarium acronyms), for the purpose of aiding in detritus and algae control. But does this little hermit really perform as advertised and is it truly reef safe? Based on my personal experience with keeping blue-legged hermits, I would answer both of these questions with a resounding “maybe.” Before adding C. tricolor to your aquarium—especially in large numbers—consider the following four caveats:

1. It’s an opportunistic omnivore What this point should tell you is, C. tricolor won’t necessarily limit its menu to the algae, detritus, and uneaten food you want it to consume. MORE