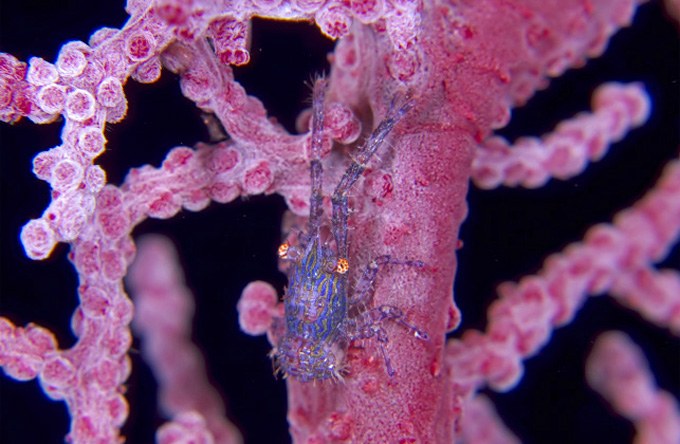 
Muricella sea fans are known for their striking coloration (ranging from bright orange, pink, red, and purple) and pronounced knobby tubecules.  A lot of reef life associates with Muricella, with the most famous and aww-worthy resident being Bargibant’s pygmy seahorses (see Steinhart Aquarium’s baby pygmy seahorses).

Well, pygmy seahorses have a newly discovered roommate.  Galathea ryuguu is a tiny squat lobster found on Muricella sea fans at Ryukyu Islands, Japan.  In order to effectively camouflage into these colorful sea fans, G.ryuguu is equally striking in pigmentation, hence its etymology.  The new species was named after the Japanese folklore Ryūgū, the opulent palace of the dragon god of the sea.

Muricella are micro-metropolises in and of themselves, so an exhibit showcasing these sea fans and the animals they host would be extremely captivating.  Alas, their care should only be attempted by experienced aquarists, and it’s difficult nearly impossible for the average hobbyist to source livestock that associates with Muricella.  Maybe one day …

Galathea ryuguu is described in Zootaxa.