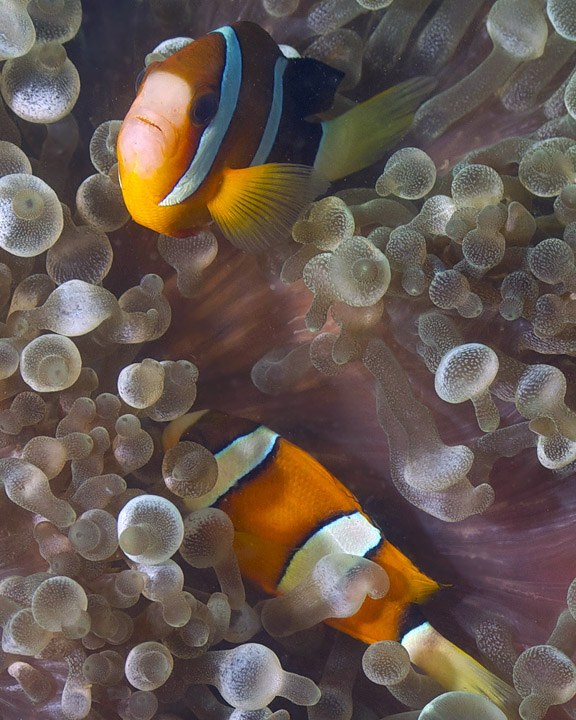 Cyanide fishing is the practice of capturing fish using a potent, inexpensive poison called sodium cyanide. Pills of sodium cyanide are placed into plastic squirt bottles, mixed with water, and then divers squirt the poisonous mixture into nooks and crannies in the reef to stun fish for collection. This method makes it easy for divers to capture fish for the marine aquarium trade and sometimes, in the case of large fish like groupers, for human consumption in Asian countries.

While its usage is effective, cyanide will kill both marine fish and corals leading to massive coral reef destruction. According to Wikipedia, “estimates suggest 70 to 90% of aquarium fish exported from the Philippines are caught with cyanide. […] Recent studies have shown that the combination of cyanide use and stress of post capture handling results in mortality of up to 75% of the organisms within less than 48 hours of capture. With such high mortality numbers, a greater number of fish must be caught in order to supplement post catch death.”  Many trade insiders believe cyanide is the single most destructive practice perpetrated by our industry.

This is a big problem.

This practice is outlawed in many exporting countries but corrupt authorities routinely turn a blind eye to its usage. This problem is very hard to police by importing countries because current methods for detecting cyanide fishing require either tissue, blood, or destroying entire fish to test for the presence of cyanide.

A diver squirts cyanide into a reef in an attempt to capture fish. Also note the bleached coral surrounding the area. Photo: J.M. Cervino

Published this weekend in PLoS ONE, researchers have made a breakthrough in detecting cyanide in marine ornamental fish. As mentioned above, the method is non-lethal, non-destructive, fast, highly sensitive and repeatable, and the equipment is potentially inexpensive to manufacture. Old methods of detection tested for the presence of cyanide directly. This new method, instead tests for the presence of metabolized cyanide (thiocyanate) in the fish’s urine. The new apparatus uses an optical fiber detector coupled with a selective filter to separate thiocyanate from other chemicals in the water sample. The resulting testing apparatus compared very well to an already established protocol using very expensive laboratory equipment.

With a successful protocol and inexpensive equipment found for thiocyanate detection, the researchers next needed to determine:

For their study, the researchers needed a model fish species for evaluation. The fish needed to represent a large percentage of the marine aquarium trade, reportedly caught using cyanide in the past, and guaranteed never exposed to cyanide. Their research indicated that a large percentage of the fish exported were from the damselfish family, Pomacentridae, and that these fish were reported as cyanide caught in the past. Since they could not guarantee that a wild-caught fish was never exposed to cyanide, the researchers decided to choose an aquaculturable species within the Pomacentridae family. That led them to investigate different clownfish species (genus Amphiprion). In talking with marine aquarium retailers, they found that there were numerous recent reports of mortality problems with imported Clarkii clownfish (A. clarkii) so this fish was chosen as their model species.

They found that their new optical fiber test apparatus could sucessfully detect thiocyanate in the fishes’ water starting at six days after exposure for the 12.5 mg/L group. The 25.0 mg/L group had detectable thiocyanate levels starting at two days after exposure. Both groups continued to show detectable levels of thiocyanate up to 28 days post-exposure when the experiment was concluded (see below graph). The control group showed no detectable levels throughout the 28-day experiment.

This is big news as there now exists a method to non-lethally detect cyanide exposure in imported marine fish! Much more work needs performed as there are yet many unanswered questions:

The study also suggests that exporting countries should export all of their fish in synthetic seawater as natural seawater can have detectable levels of thiocyanate in it leading to false positives with this testing protocol.

This is great news as we can now hold exporting countries accountable for their exports. Importers can report back to exporting nations about which export companies are illegally practicing cyanide fishing and enforcement can take place.

I am very excited to see further work performed in this area as exporters must curtail illegal cyanide fishing in order to save the reefs we love.