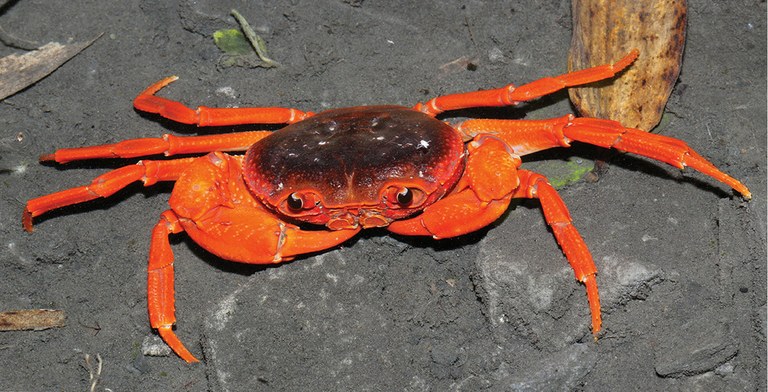 
As with many newly discovered species, Y.calciatile was first observed in the aquarium trade.  Says the ZooKeys paper’s introduction:

In the past few years, there has been a growing trend in the aquarium trade for colorful freshwater crabs from South China, with species from the genera Nanhaipotamon Bott, 1968, Hainanpotamon Dai, 1995, Neilupotamon Dai & Türkay, 1997, and Heterochelamon Dai & Türkay, 1997, sometimes showing up in pet shops and even exported to other countries. We initially obtained one such species from the trade that has relatively long ambulatory legs with reddish to purplish coloration, which was interesting as it possessed a unique male first gonopod structure. The native ornamental fish dealer who sold these crabs to us eventually agreed with the first author’s request to conduct a survey at his collection site, which was in northern Guangdong.

A molecular analysis suggests that it does not belong to any known genera, so the new genus, Yuebeipotamon, was created. While we encourage using scientific names for accuracy, good luck pronouncing Yuebeipotamon calciatile without people within earshot thinking you’re possessed.  Maybe we can just call it the flame crab.