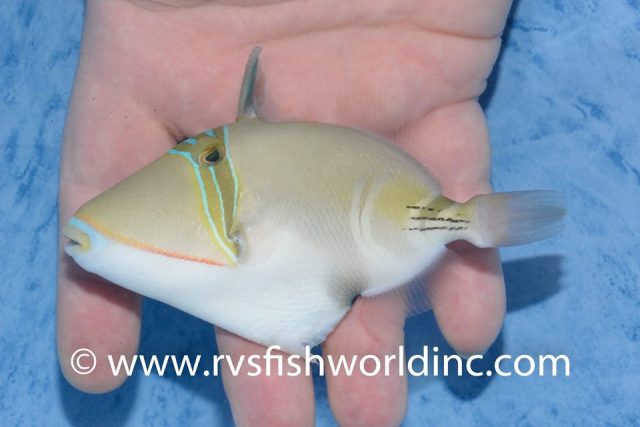 RVS Fishworld never ceases to amaze with some of the unique piscine treasures they haul up from the Philippines. Featured here are a pair of one-of-a-kind catches that warrant discussion, as these unusual specimens represent some extraordinarily rare aberrations to rather common species. 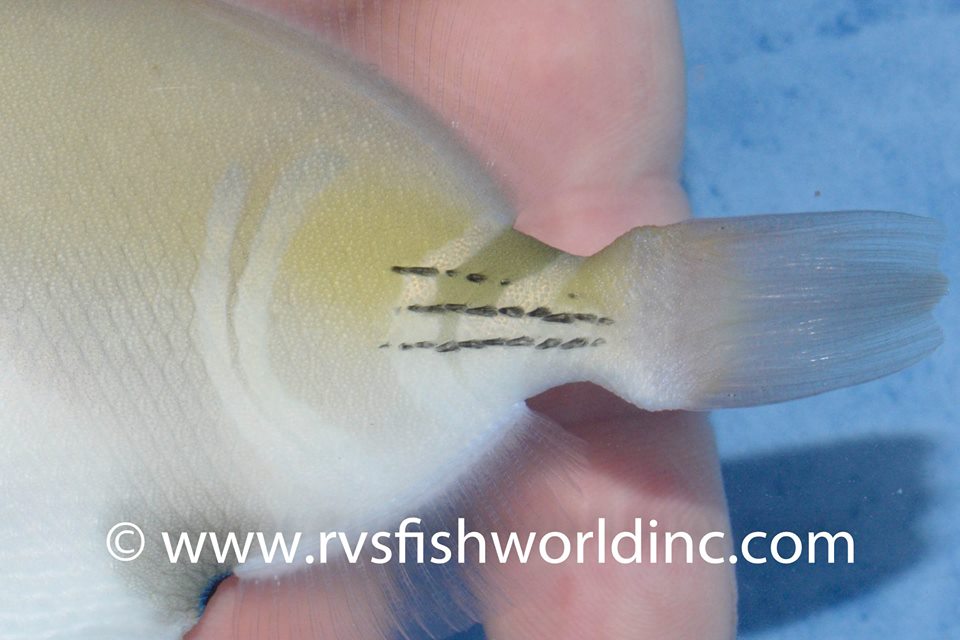 The semicircular markings are vaguely reminiscent of L. lunula, though the similarities are likely atavistic.

The most exciting of the bunch is this Rhinecanthus triggerfish. We know this genus primarily for the familiar Humahuma or Picasso Trigger, but in total there are a half-dozen other species, most of which enter the aquarium trade on occasion and some of which (e.g. R. lunula, R. cinereus) go for a hefty price. The fish in question doesn’t appear to belong to any of the recognized species, and it’s all but certain that this isn’t some newly discovered species, so we next need to ask whether this might be a hybrid. 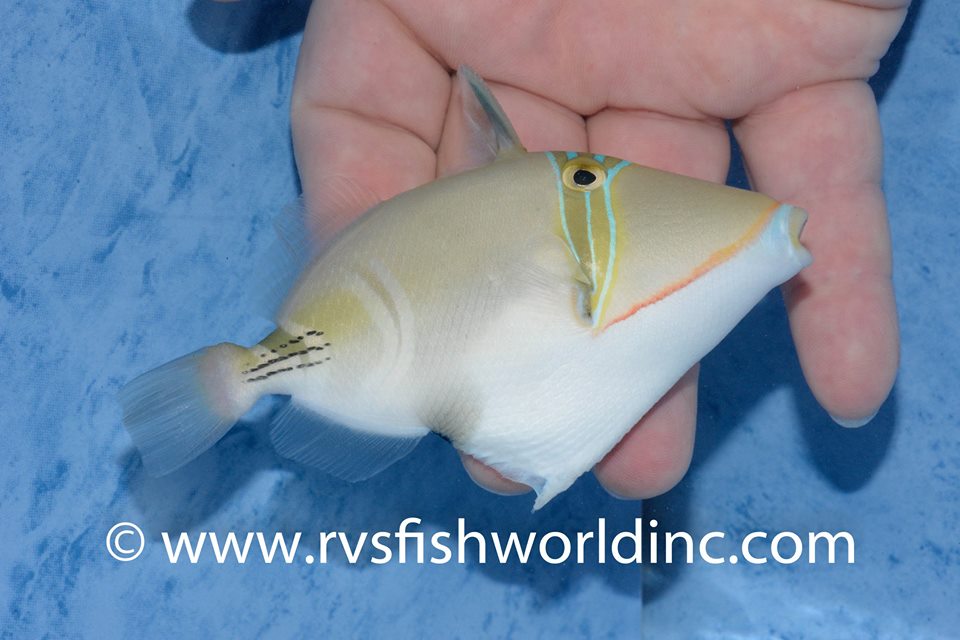 The most likely culprits for such an interspecies pairing are the Blackbelly Triggerfish (R. verrucosus), the Wedge-tail Triggerfish (R. rectangularis) and the aforementioned Picasso Triggerfish (R. aculeatus). All three range throughout the Pacific, and the only other species found here, R. abyssus, is a distinctively elongated fish known only from three specimens. When we examine these three species, it seems clear that the Wedge-tail has nothing to do with our fish, leaving us with the likely parents being a R. verrucosus and R. aculeatus. Still, very little about this individual’s patterning hints at a clear relationship to the Picasso’s characteristic markings, which could argue for this merely being an aberrant specimen of the Blackbelly Triggerfish. Ultimately, genetic analysis is the final arbiter on such matters. 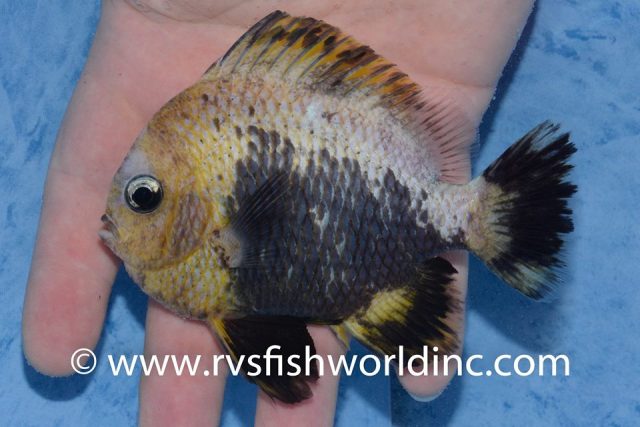 The Dascyllus damselfish seen here is another oddball, showing the same sort of koi-like patterns that often leads to exorbitant prices in more desirable groups. There have been Koi Coral Beauty Angelfish, Koi Scopas Tangs, Koi Passer Angelfish, and the famous inbred koi population of the Queen Angelfish endemic to St. Paul’s Rock in the Central Atlantic…. but this might be the first koi damselfish on record. It’s hard to say whether this is a hybrid or just a severe chromatic aberration. 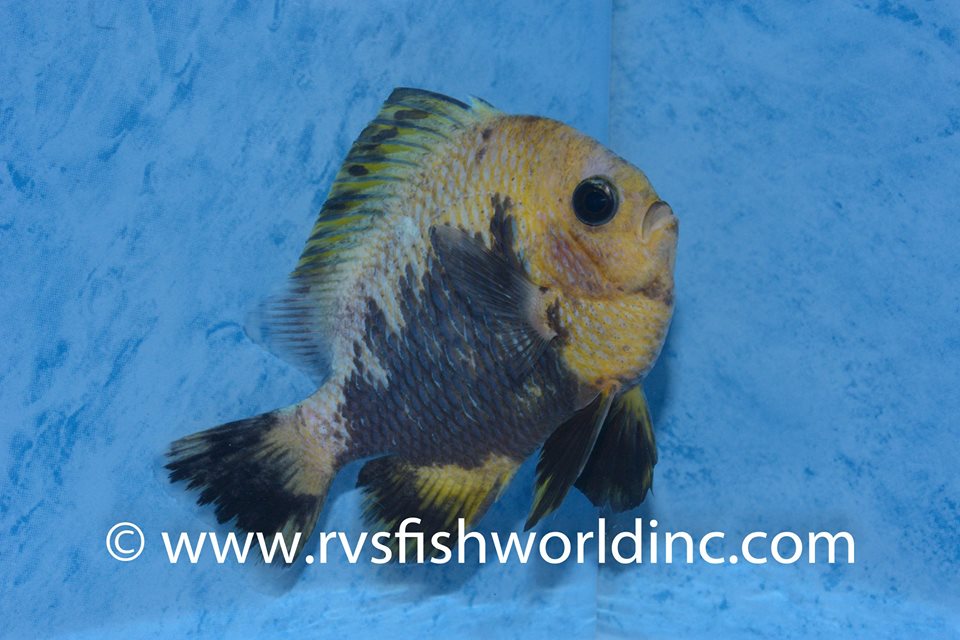 I’d lean towards the latter scenario, but it’d be hard to rule out this being the hybrid of two widespread Indo-Pacific species, the Three-spot Damselfish (D. trimaculatus) and the Reticulated Damselfish (D. reticulatus). Of course, there’s less of a market for an aggressive species of inexpensive damselfish than there is for the other known koi aberrations, so it’s hard to say how much a specimen like this is worth.