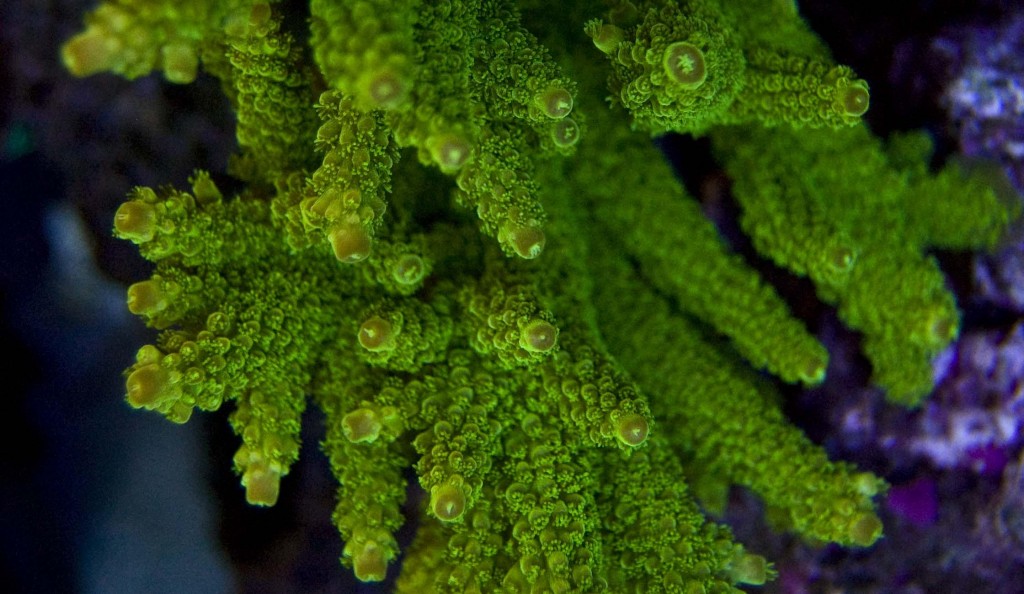 Very often I meet reef aquarium hobbyists that believe Acropora species corals are too difficult or even imposible to keep.  A majority of them will have success with other corals but encounter failures when attempting to sustain this particular variety. They can be more demanding and apparently more sensitive to pests and instability.  I have found some particular specimens are more sensitive then others.  Captive grown Acroporas that have been cultured under artificial light and sea water seem to be the hardiest.  Generally wild colonies tend to be the opposite.  Even within the captive grown corals there are specific specimens that tend to tolerate more then others.  The coral in the image above is one I believe to be very hardy and can survive when others perish.  This coral grows very fast when speaking about this species and will tolerate instabilities that others will not.  It also seems to be less susceptible to parasites such as parasitic copepods and flat worms.  I believe the copious amount of slime this coral produces tends to help it survive these invasions.  This particular captive grown coral was grown from a seed fragment over several years and has been in the hobby for many years.  For hobbyists without success in keeping this species, this particular coral would be a good starting point.  Starting out with a more sensitive specimen or a wild colony would lower chances of success.  Many times the choices one makes on particular specimens lends to the higher failure rate with this species.  Paying attention to parameters and keeping alkalinity, calcium and magnesium within range and stable is key.  Also strong light and good random flow is essential.  Keeping these things in mind will put the odds in your favor with Acropora success.