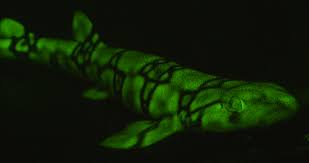 Scientists have developed a ‘shark vision’ camera that allows us to see just how swellsharks and chain catsharks are able to view their underwater world. Both species of sharks have  brightly fluorescent properties, essentially meaning that these sharks are able to absorb external light and emit it in a different color. Scientists studied the low light photorecepters in the eyes of both species, which enables the sharks to detect light of certain wavelengths. Based on that information, the scientists were able to build a camera that uses the same wavelengths, allowing the scientists to see the underwater world from a sharks eye perspective.The camera footage revealed some interesting information, notably that the sharks are able to see their own patterns with better clarity the deeper they travel. The sharks flourescent skin proteins emit the external blue light at different wavelengths, which produces a greenish light. Normally, light disappears as you travel deeper, and blue wavelengths are the only color that is visible at such depths. However, the camera footage revealed that sharks become more visible at depths of 80 to 130 feet. This discovery opens up the possibility that sharks could be using the distinctive patterns to identify and communicate with eachother. MORE