Congratulations to our longtime friend and contributor Yi-Kai Tea (aka Lemon) on his fascinating new article, “Angels in disguise: sympatric hybridization in the marine angelfishes is widespread and occurs between deeply divergent lineages”, published by The Royal Society Publishing. The piece, which he produced with colleagues Jean-Paul A. Hobbs, Federico Vitelli, Joseph D. DiBattista, Simon Y. W. Ho and Nathan Lo, explores the hybridization of distinct angelfish species in the wild, and reveals some surprising results. 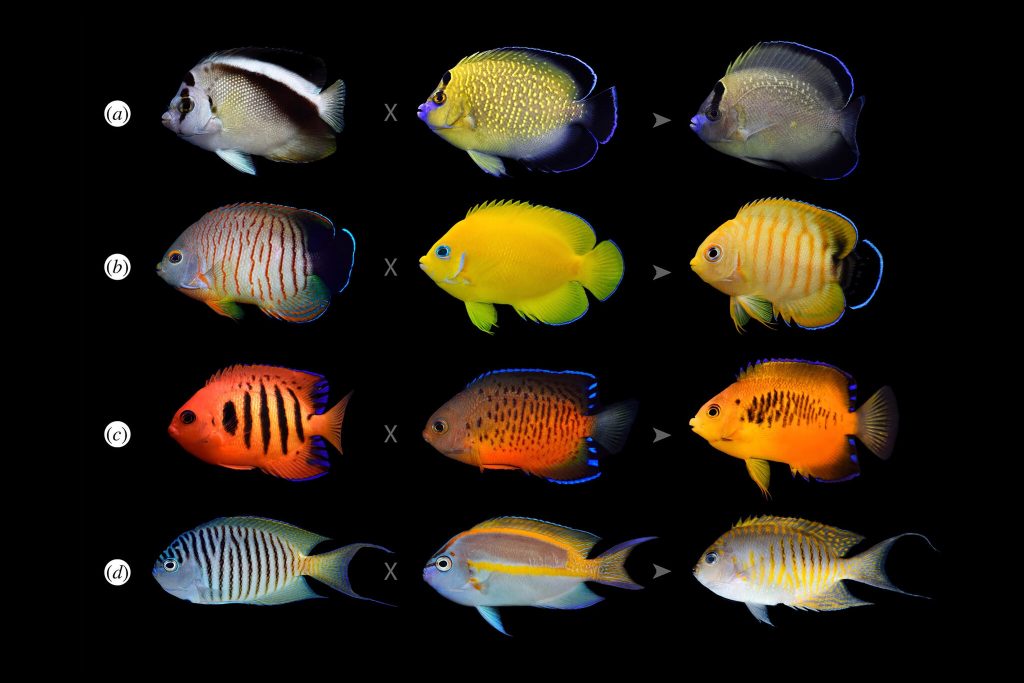 Various species of angelfish and their putative hybridized offspring. Row A, from left, a Griffis and a goldspotted angelfish; Row B, a red stripe and a lemonpeel angelfish; Row C, a flame and a rusty angelfish; Row D, a swallowtail and a bellus angelfish. Credit…Yi-Kai Tea

The New York Times picked up the story and shared some interview points as well as highlights from the paper: “Take, for example, the multibarred angelfish (Paracentropyge multifasciata), which boasts black-and-white stripes like window blind slats, and the purple masked angelfish (Paracentropyge venusta), which resembles a lemon drop with a brilliant purplish-blue backside. When the two fish breed, they produce a blue-and-yellow hybrid swirled with white, almost like a slice of babka.

When Yi-Kai Tea, a graduate student at the University of Sydney and the Australian Museum Research Institute first saw this squiggly angelfish, he suspected it was a hybrid. Although coral reefs may appear to be a panoply of bright hues, many coral reef fish have colorful patterns as distinct as stamps. So when a hybrid happens, it’s easy to spot.

After comparing the mitochondrial DNA of 37 hybrids to that of their parents’ species, the team found that a lofty 48 percent of marine angelfishes can hybridize, more than any other group of coral reef fish. This data topple the previous record-holders, the butterflyfishes, a family in which more than a third of species are capable of producing hybrids.

One of the paper’s most surprising findings is that angelfishes can produce hybrid offspring with species possessing as much as 11 percent difference in mitochondrial DNA. ‘This is extremely remarkable,’ Mr. Tea said, noting that this evolutionary distance was equivalent of a liger (but not quite as far-flung as the sturddlefish).

Although the paper reveals a surprising abundance of angelfish hybrids, the mechanism itself — how and why hybrids form — remains a conundrum, the researchers write. One eccentricity, for example, is the fact that the researchers could not find a single example of a hybrid regal angelfish, a tropical fish that swims almost anywhere there is a tropical ocean.

The 11 percent hybrid in the new paper is a mix between the Emperor angelfish, or Pomacanthus imperator, and the bluering angelfish, Pomacanthus annularis.”